~Sunday~ In March of this year, I went to the Intelligent Content Conference in Las Vegas, where the closing keynote speaker was none other than Andy Weir, the author of the book, The Martian.

When describing the publication history of the book, he mentioned that at one time it was available for download for $.99 on Amazon.com, and during the Q&A time, I was chosen to ask him a question. I phrased my question this way, "I'm sorry I've neither read your book nor seen the movie, but I was wondering if the book is still available for download for $.99." Once the laughter subsided, he explained that once he sold the rights to the book to Random House, he was prohibited to continue selling the book himself—at any price.

Fast-forward to the book signing line, where when he recognized me from the Q&As, he autographed: 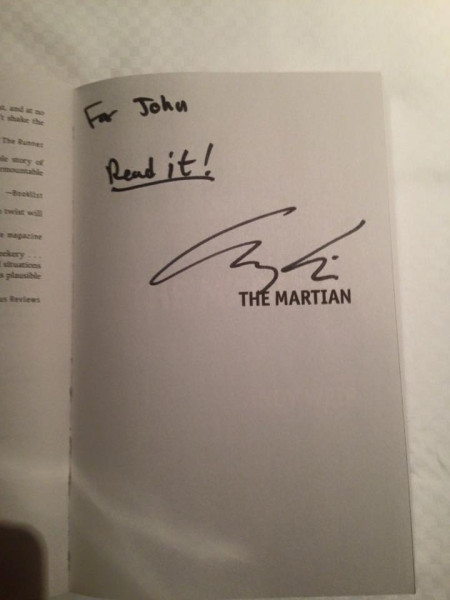 I finally got around to doing that in April, and after describing a little of the plot to Bob, he asked if I'd be interested in watching the movie when I was done with the book, to which I said yes.

An astronaut becomes stranded on Mars after his team assume him dead, and must rely on his ingenuity to find a way to signal to Earth that he is alive.

My thoughts and observations

Have you seen this movie? If so, what did you think of it?
Collapse