~Saturday~  You may remember (or not) this picture from day 6 of our Michigan vacation: 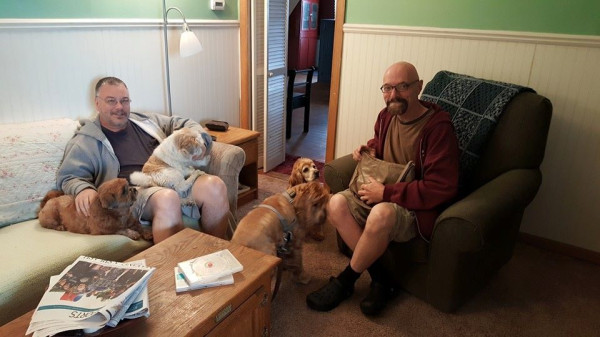 As I noted in that entry, Bob's sister, Mary, has been slowly going through her mother Ruth's stuff (she passed away 5 years ago) and decided that she was ready to let go of some things.

One of the things she had for Bob was that purse you can see on his lap. Bob was touched and appreciated some of the contents of the purse, including some pictures that were inside it, but in the end, the purse didn't really go with his shoes.

What to do with it?

Enter Amy of The Wayward Stitch! In addition to being a talented crafts professional, she is Bob's friend and neighbor, and he asked her if she'd be able to do something with it, to repurpose (re-purse-pose?) it for Mary.

Amy immediately got excited about it, and she asked Bob to tell her a little bit about Mary for some ideas on how to personalize the transition of the purse into something Mary would like and use.

I mentioned that since Mary was such an avid line-dancer, maybe something smaller that she could take to dancing would be cool, and maybe with a fringe on it, as I've seen some like that at line-dancing gatherings in the past.

Well, Amy did a super job, and we were so excited to see the results of her work. Unfortunately, we didn't get a good picture of the "before" version of the purse, so I cut it out of the picture alluded to above.

Bob mailed the beautifully converted purse back to Mary this week, and she sent us a picture of it sitting on their mother Ruth's dresser that she has in her room. 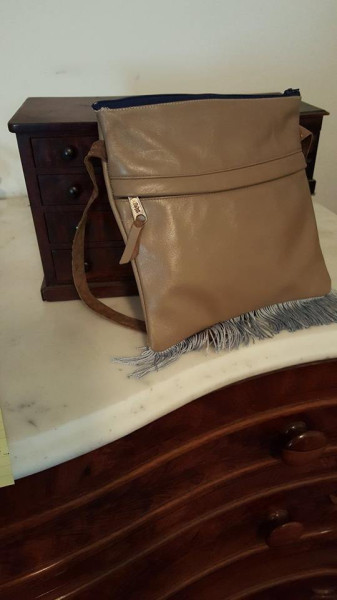 Mary's reaction (as stolen from a Facebook posting of hers):

Mamma's purse. Of all my mother's momentoes, her daily purse brought me my biggest challenge—memories and love collided. She's been gone 5 years. Her purse was always full of kleenex, cough drops, safety pins, measuring tape, several pairs of glasses, you get the idea. It was tan and ugly.

"Here, hold my purse," she would say. It was not my style and I was always embarrassed... Well, finally a clear time presented itself. I took a picture and passed it along to my brother Bobby, who had it made into a smaller, much more hip purse.

When I opened the surprise, I could hear her voice, "Here, hold my purse."