~Tuesday~   We had breakfast at Barbara and Charley's house, where Bob scrambled us some eggs, which we had with toast we made from the remainder of the loaf of bread we'd taken with us in the car, and which had served us so well for peanut butter and jelly sandwiches on our trip up. Whew. That was a long, albeit well-punctuated, sentence. You can take a breath now.

Frances and Vincent adoring the kitchen door Bob walked through Out the kitchen window, Bob asked me what I noticed about these squirrels in the yard: 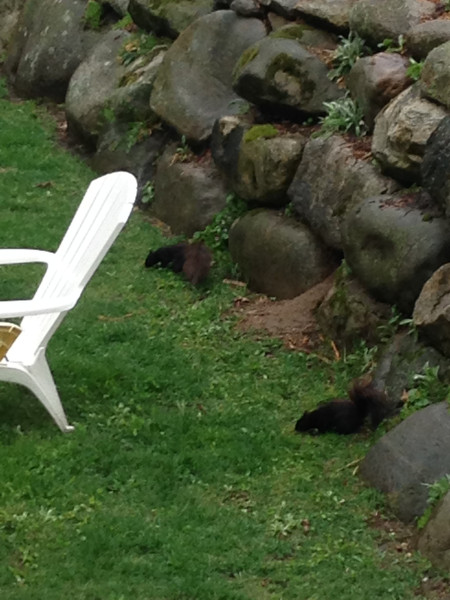 I replied that they looked black, and that's how I learned about black squirrels—"common in the Midwestern United States, eastern Canada, and parts of the Northeastern United States and the United Kingdom," according to Wikipedia.

Bob told me the W. K. Kellogg-related urban legend about the black squirrel, which Wikipedia relates this way:

Black squirrels are abundant in Battle Creek, Michigan, and, according to legend, were first introduced there by Will Keith Kellogg, founder of the Kellogg Company, in an effort to destroy the local population of red squirrels. The story continues that this same population of squirrels was further introduced to the campus of Michigan State University by John Harvey Kellogg for the same purpose.

This story was corrected by Wilbur C. "Joe" Johnson, the late chief wildlife biologist at MSU's Kellogg Biological Station near Battle Creek which includes W.K. Kellogg's former 32-acre estate at Gull Lake. Johnson, who worked at KBS for 48 years, credited Dr. John Harvey Kellogg for introducing the black squirrel to the Kellogg estate during the 1930s. Johnson said he himself trapped 20 black squirrels at Gull Lake during the early 1960s at the specific request of former MSU president John A. Hannah and released them on the East Lansing campus.

I'm friends with Bob's sister, Mary, on Facebook, but we've never met, and I wanted to try and surprise her at work. So we drove to Barnes & Noble, and I went inside to try and do that.

I couldn't find her, but there was one lady whom I thought might possibly be her, although didn't really think so, but then thought, "Sometimes people don't look like their pictures," so I clandestinely snapped a picture of her with my phone and texted it out to Bob, who was sitting in the car with Frances and Vincent.

It wasn't her, so I ended up asking if she was working, and after one worker said, "I can't give out that information," another one told me she works nights now—and that she was coming in at 4:00 today.


We went to Wattles Road to see the old McVeigh homestead—at least that's how I think of it.

The McVeigh house on Wattles Road 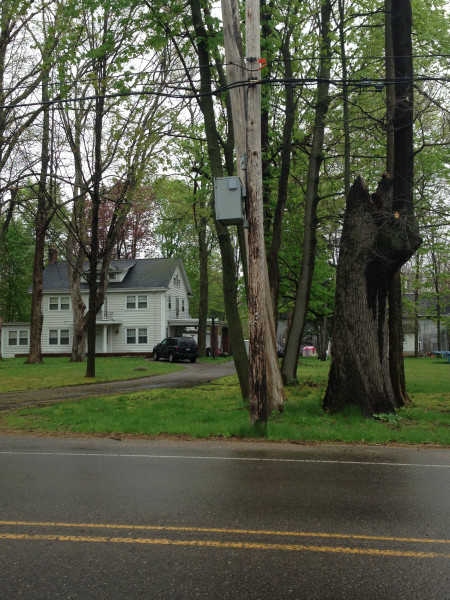 Like a museum docent, Bob gave the room-by-room history of the big house, and which windows opened into which sibling's rooms at various times during their residence there.

The McVeigh house on Wattles Road close up 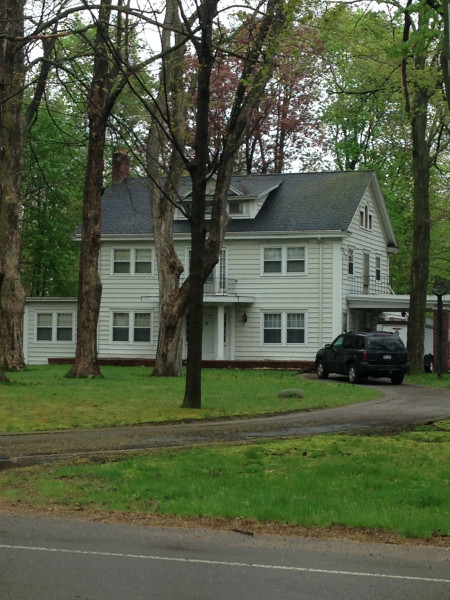 Last year, Bob lent me a book called Murder in Battle Creek: The Mysterious Death of Daisy Zick, which I thoroughly enjoyed.

In 1963, Daisy Zick was stabbed 27 times at her home in Battle Creek. It’s an unsolved case that locals are still talking about today. It’s also the subject of Murder in Battle Creek: The Mysterious Death of Daisy Zick by Blaine Pardoe.

This murder happened virtually right around the corner from their Wattles Road house, so we drove over to see the street on—and the house in—which it happened. Cool.


From there, we set out for Cornwell's Turkeyville, from which Bob had sent me a postcard the last time he was in Michigan. 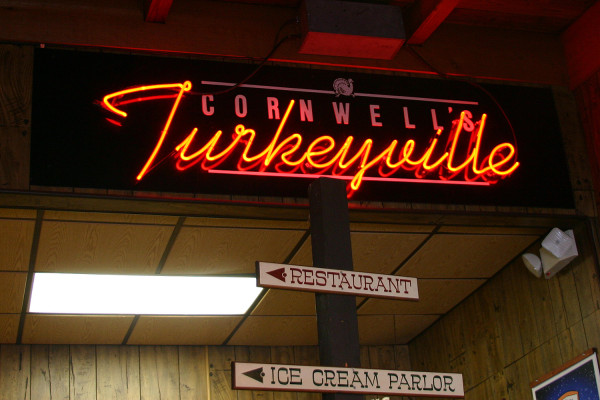 We had lunch there, both enjoying their signature Buttered Turkey: Pieces of white and dark meat served on a homemade bun with butter and mayonnaise, for $4.39. But as it fortuitously turned out, it was "Turkey Tuesday," and we got both sandwiches for $5.17 including tax. We gobbled that up—the price and the sandwich.


Arriving back in Battle Creek, we went by Kmart so that I could try and surprise another of Bob's sisters, Kathy this time, whom I'm also friends with on Facebook.

I went in to find her, and after scouring the store with no luck, I asked someone if she was working. They paged her and found out she was at lunch, and they took me over to the door from which she'd come out.

She came out from the back, and was staring at me as she slowly walked toward me.

"Yes, I’ve seen you on Facebook," she replied, smiling.

We chatted for just a couple of minutes before I went out to the car and sent Bob in to visit with her before her break ended.


While there, we got a call from Barbara telling us there was going to be a showing of the house at 4:00. We had enough time to stop back by the house, which we did, and then left at about 3:45.

We went back to Barnes & Noble to see Mary, since it would be 4:00 by the time we got there and got inside. She was working the register, and I was hiding behind some bookshelves, peering over, trying to wait until there was no one at the register, to walk up to her and purchase my Mother’s Day card. She caught me peering from the book collection.

I got in line and after coming around the counter for a hug, she rang up my Mother’s Day card, and we chatted a little.

After that, I went back to the car, and Bob went in and they chatted for a bit, including planning a visit to see their brother Billy tomorrow.

From there, we stopped by Target to get a few incidentals, and then by the liquor store. I bought a bottle of Crown Royal to take to Joe and Robin's on Sunday—partly to replace their bottle that I drained, but more so as a host gift for the pizzas on the grill they're going to make for us.


We stopped back at Barbara and Charley's, where Aunt Barbara graciously agreed to babysit Frances and Vincent while we met the Warners and Coffmans for dinner at Moonraker.

Our party consisted of Michelle, Randy, Zach, Junsu, Mary Lou, Micheal, Bob, and myself. Bob and I remembered Michael Casterline's recommendation, during our stay with the Casterlines in Asheville, NC on the way up, to have an olive burger while we were in Michigan, and since they were on the menu, we each got one, and both loved it. 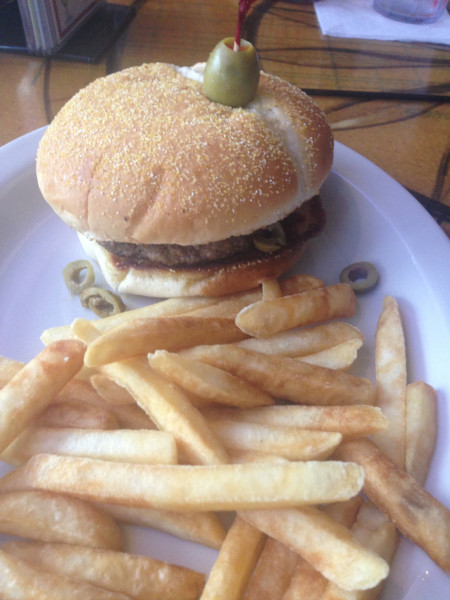 It was a lovely dinner and great to meet Michelle, Mary Lou, and her beau Micheal, and good to see Randy, Zach, and Junsu again, whom I'd met before during one (or more) of their trips through Raleigh on their way to Wake Forest, NC to visit Randy's brother, Tim, and family.


Back at the house, we were welcomed home by Frances and Vincent, and we had dessert, sharing our caramel popcorn from Turkeyville with Barbara, chatting for a little while before hitting the sack.
Collapse