~Monday~  We were up fairly early this morning, and we hung out on the screened-in porch until it was time to leave the house for another showing.

Barbara is considering us their good luck charm, as they'd had a little dry spell of showings until we came into town.

Frances, Vincent, and Chucky hung out with us, too, of course! Vincent wondering if it's time to go yet 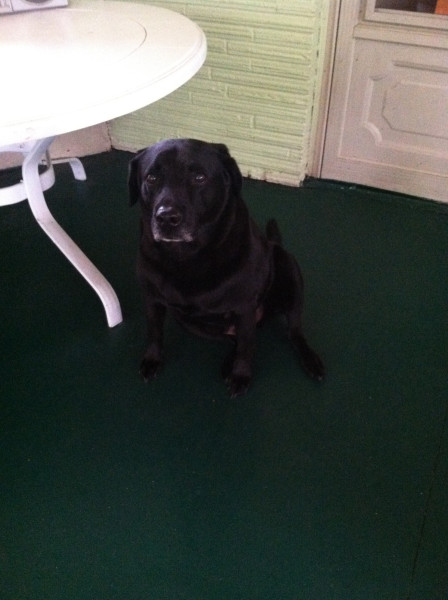 We had breakfast at a nearby Panera Bread, and since the outdoor seating wasn't yet available, Bob and I just sat in the car with Frances and Vincent and enjoyed our breakfast.

You know you want to see what we had:


I also had a sesame seed bagel with some plain cream cheese, and we shared a large cup of coffee and some apple juice.


We rode around downtown Battle Creek, and Bob showed me many sights of his growing up, many of which were now empty lots.

I snapped this picture of the Kellogg Arena as we passed it, since it was the first thing I'd seen with the word "Kellogg" on it. 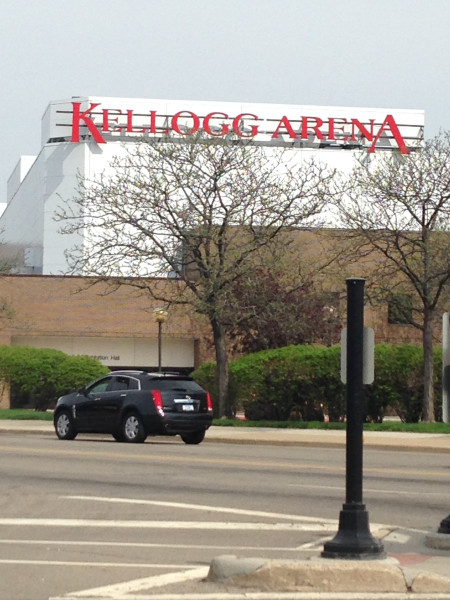 I saw the lot where Bob's daddy's car wash used to be, which is actually in the opening sequence of the TV series Battle Creek, of which we took a screen capture: 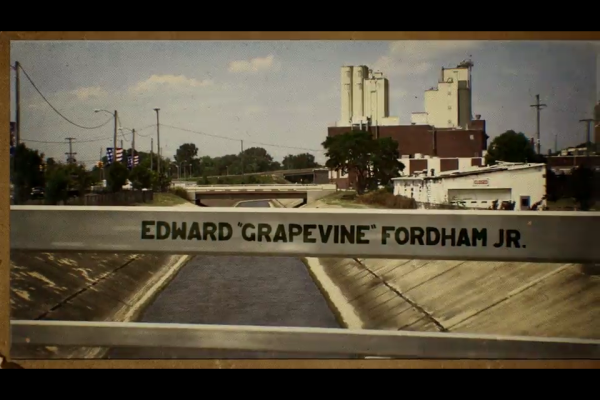 I also saw the lot on Frelinghuysen Street, where the McVeighs lived before they moved to their iconic Wattles Road house.

And then some of the schools Bob attended, including Fremont Elementary, where he went to kindergarten, and Kellogg Community College where he earned his associate's degree, before going on to get his BA and then LPN.

We also visited Bob's boyhood Catholic school, St. Philips, which I've heard so much about from Bob over the years. Some of the buildings were gone, but the grotto was there, which I'd seen in his school reunion pictures, and we took a few shots on it, only one irreverant.

John on the grotto steps 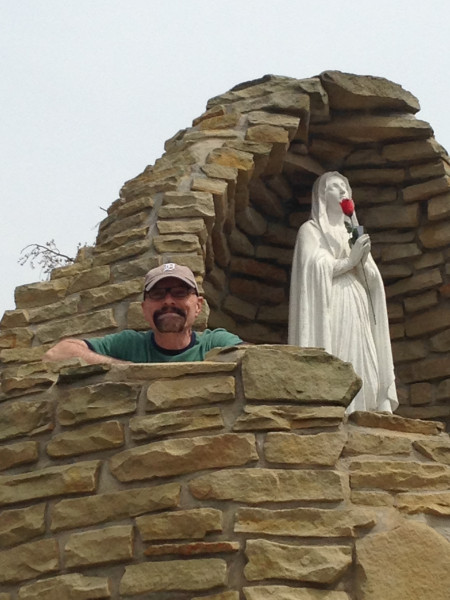 We spent a half-hour or so at Monument Park, specifically at the Sojourner Truth Monument. It was a pretty weather day, and we took advantage of it by spending a little time outside. 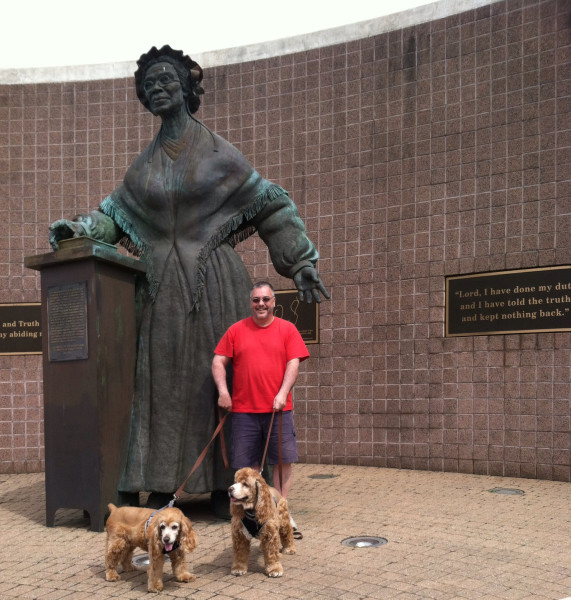 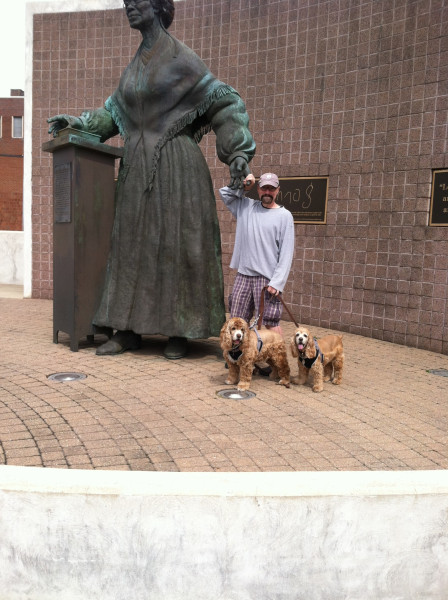 The history of Sojourner Truth 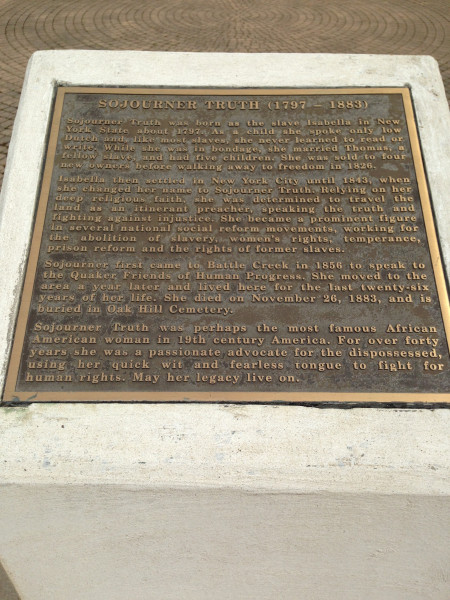 Our final stop on my tour of Battle Creek for the day was at the Oak Hill Cemetery, as I wanted to visit the gravesite of the patriarch and matriarch of the McVeigh family.

We stopped at the gatehouse to get Bill and Ruth's address, and on the way to their grave, we came across another family name that I recognized, the Coffmans. 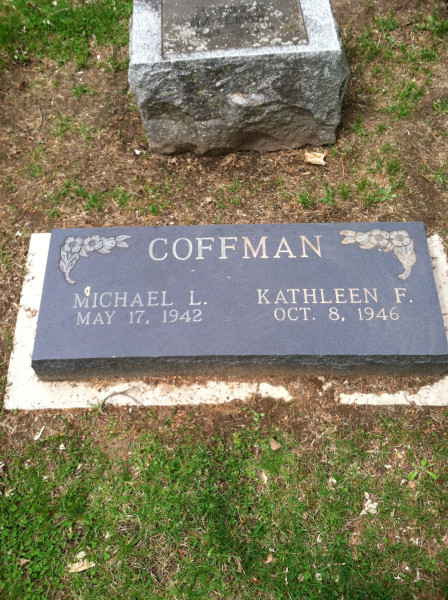 Bob, Frances, and Vincent at Ruth and Bill's place 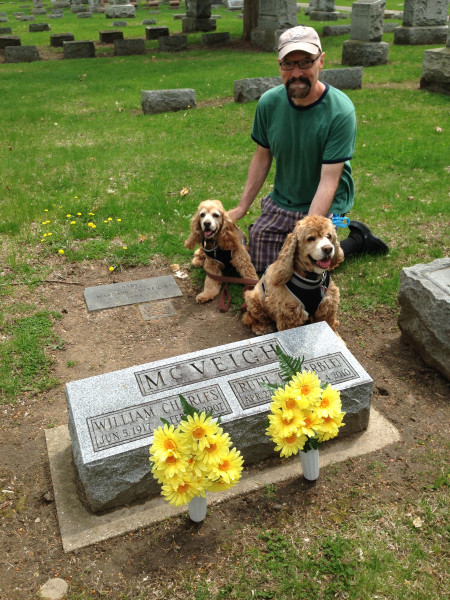 At Bill and Ruth's grave, I said to them, "If it's okay with you if I ask Bobby to marry me one day, just don't say anything."

Sojourner is everywhere we are today 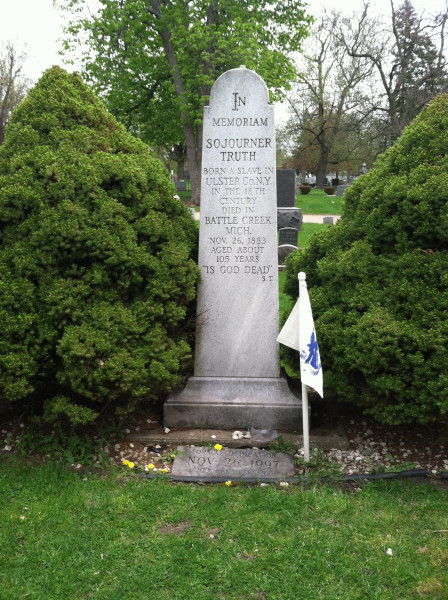 On our way home, we stopped at Papa John's and bought a pizza for lunch, which we shared with Barbara when we got home, since she came home for her lunch hour.

Later in the afternoon, Bob was in touch with his brother Joe, who said he’d be home at about 5:00, so we headed over to visit at shortly before 5:00.

It was an absolute pleasure meeting and enjoying drinks with Joe and Robin in their backyard, where their delightful Gracie graciously welcomed Frances and Vincent, and where I finished up both their Crown Royal and Jim Beam bottles, neither of which—in my defense—were anywhere near full. :-)

After enjoying the conversation and company for a little while, we decided to order take-out Chinese, which we also enjoyed sitting out back eating. I had General Tso Chicken, Robin had Bourbon Chicken, and Joe and Bob had Shrimp Mei Fun.

Before leaving, Robin gave Bob a couple of large garden pots, but not too large to fit into our already snugly-stuffed trunk. :-)
Collapse