~Saturday~  We were up at a decent hour, and Michael Casterline made us fried egg sandwiches that were out of this world!

Then, Frances and Vincent worshiped the door that Bob walked through to take a shower at the Casterline's house. And then the front door later when he stepped outside to pack the car. 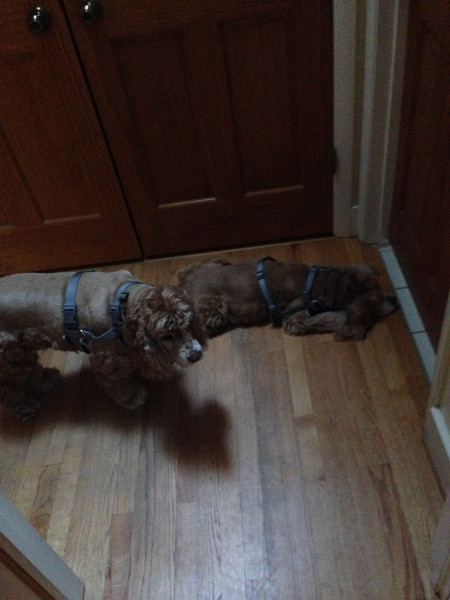 Today's trip was from Asheville, NC to Lexington, KY, with a possibility of making it in time for me to do a bourbon distillery tour at 3:00, but it wasn't a "must-do," so we didn't rush to make it happen.

I should have posted this in our day one entry, but this is the route we took: 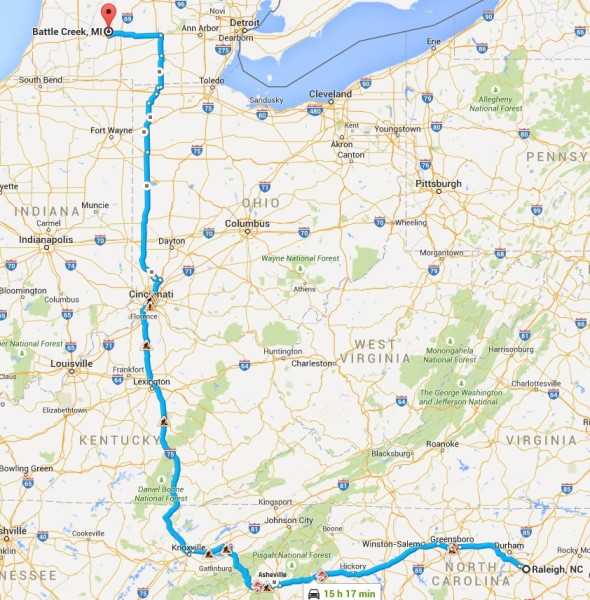 For the record, we did have back-up navigation (a.k.a. Bob's preferred navigation) in case Google maps let us down: 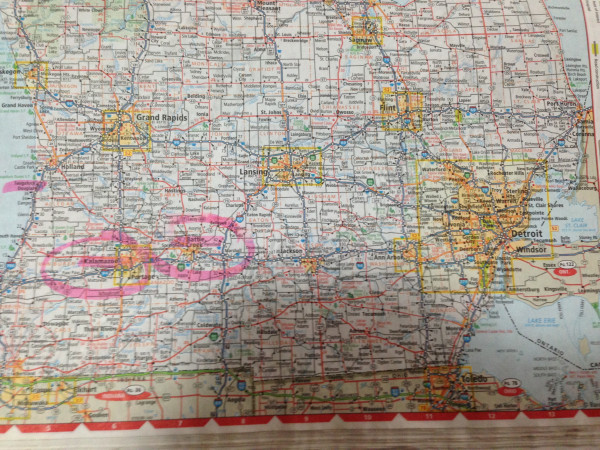 After being on the road a while, we noticed some brown numbered signs on the side of the road that counted up from 1 to 10, and then back down from 10 to 1. Neither of us had any good guess about what they might mean so I asked Siri.

These signs are for gauging fog conditions. If you notice, there is a camera in the middle of these signs. There is some sort of formula for visibility that tells DOT how bad the fog is by looking at how many signs can be seen during fog or smog conditions.

Bob had burned a CD of a playlist he made with iTunes, for which I was to guess the theme of the songs. He predicted I would guess it by the fourth song, and that's exactly when I guessed it.

When the third song, Sweet Sweet Smile, was playing, I asked, "Is this The Carpenters?" And when he said yes, I thought back to the first two songs and wondered, "Were those duets, too?" He said they were, but that the next song wasn't by a duo, although the artist had "quite the pair."

When the next song, Tie Our Love in a Double Knot by Dolly Parton came on, I noticed that her name began with a D, after hearing the previous artists' name beginning with a C, and I guessed, "Are the songs in alphabetical order by artist???"

The whole point of this game was to keep the driver (that would be me) awake, and it was a big success. For the rest of the CD, for which there were over 20 songs, I tried to guess the artist's name knowing what letter it should begin with. Thanks, dear, for your time and energy in making the playlist, and for your boundless and impressive knowledge of—and enthusiasm for—music.


We stopped at the rest area just over the Tennessee/Kentucky line, where we had lunch—of peanut butter and jelly sandwiches and chips—on a picnic table.

John and "the kids" arrive in Kentucky 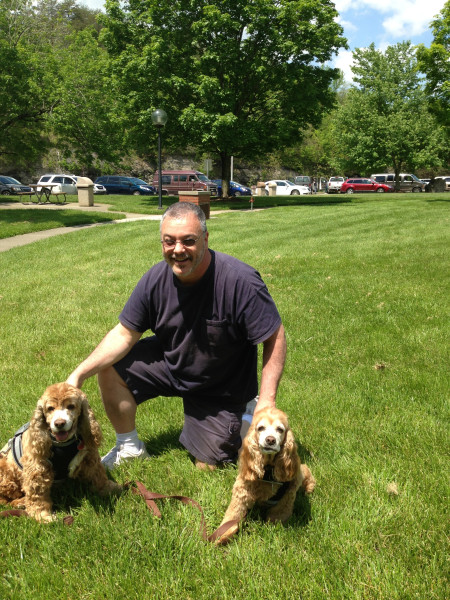 At practically every stop, we encountered dog lovers who asked about Frances and Vincent, and it wasn't uncommon to hear, "I do (or did) have a Cocker Spaniel," and at this stop a couple approached us with their two kids, Benjy and Charley, so that they could pet Frances and Vincent, while their parents showed us pictures on their phone of their Cocker Spaniels, Ruby and Bailey. Awwww.


We arrived at our Motel 6 in Lexington, which was just adequate. A big factor in our decision to stay there, other than price, was that they were dog friendly, and so we settled in.

Frances and Vincent worshiping the hotel door Bob walked through
to unpack the car. 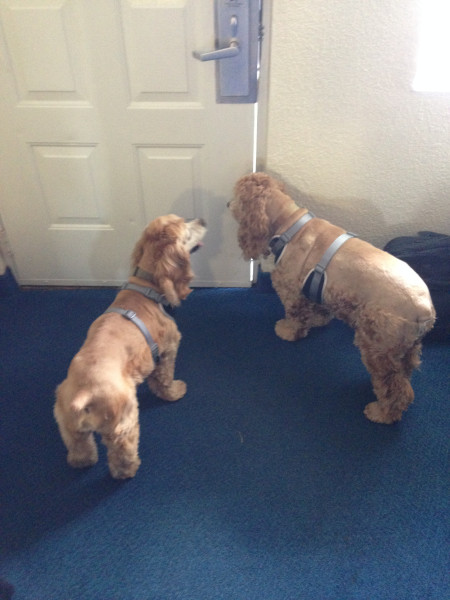 They had two levels of Internet access, for which you had to pay extra, and uncharacteristically of me to pay extra for anything, I did pay it, and I chose the $4.99 level over the $2.99 level, because it was advertised as "25x faster."

In retrospect, I can’t even imagine what the slower speed access was like if it was indeed 25x slower than what we experienced. You also had to enter in a password to connect to it, and we had to enter it 600 times while we were there for one night. Okay, slight hyperbole. 400 times.

One reason was that it seemed like it would only let two gadgets connect at a time, so between Bob’s phone, my phone, and my laptop, one connection was always being dropped, which means we had to reconnect to it again, causing us to have to enter the password again. Crazy.


We didn't get in in time to make the distillery tour, and I was a bit tired, so I napped for about 2 hours. Bob napped, too, but not nearly as long. He took Frances and Vincent for a walk.

When I woke up, I walked over to the nearby Arby's to grab us some dinner, and after posting this picture on Facebook, someone pointed out how even though some of the lights were out, the remaining lights still successfully intimated the name of the place. 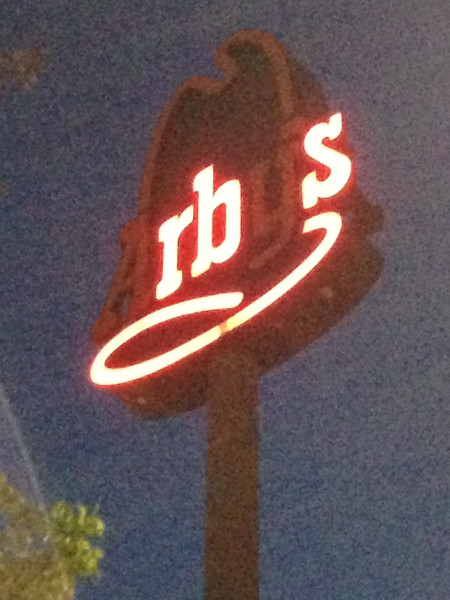 We tried to watch a little TV, but with 4 of the 10 or so channels being variations of ESPN channels, there wasn’t much of interest to us. We watched a little of Shark Tank and were amused by the lady pitching the Loofah soap.


Tomorrow, we'll drive to Battle Creek to complete this part of our trip, and it will include a stop in Florence, KY to have lunch with Bob's brother, Charley.
Collapse