~Saturday~   It all started on Saturday, January 3, 2015. Bob was gracious enough to rent Love in the Time of Cholera with his NetFlix subscription to watch with me.

My Mostly Social Book Club is currently reading the book, and I'd already read it in February of 1995, as a member of another book club, The Nematomes. I checked it out from the library, and after two renewals, while making little progress, I decided to abandon it and watch the movie instead. It's quite a long, and arduous read.

In one scene, Fermina, the female protagonist of the story, is working on a painting. She's sitting in front of an easel and obviously trying to come across as "cultured."

So, while painting, Fermina stops to receive a visitor, a potential suitor. After he leaves, and she returns to the painting, I say out loud, "Number 12, Brown," intimating of course that she is doing a paint-by-number piece.

Well, this just tickled Bob to no end. He got on one of his laughing jags that goes on for quite the while, which I so enjoy bearing witness to.


Fast forward a couple of days, and while I was visiting Bob again, he gave me a present, which turned out to be none other than a paint-by-number set! It was 5x7. He'd also bought a much larger one, 8x10, for himself.

He did say that he didn't expect me to do it, knowing how not crafty and not patient I am—two things that I'm pretty sure are strikes against you in a paint-by-number endeavor. And then he added, jokingly, something to the effect of, "But I would recognize it as a gesture of how much you love me if you did."

Over the course of the next few weeks, he worked diligently on his, and not without talking about how tedious and time-consuming it was, and that he now had no expectations at all of me doing mine.


I put it off for quite a while, and then on Sunday, February 1, I thought, "It would be really cool if I could do it and finish it in time for Valentine's Day.

After I finished the very first color, the brush flipped out of my hand and landed on the canvas, leaving black paint over an area numbered "1," which was going to be white, of course!

See the black smear left after desperately trying to get
the black paint off with a wet paper towel. 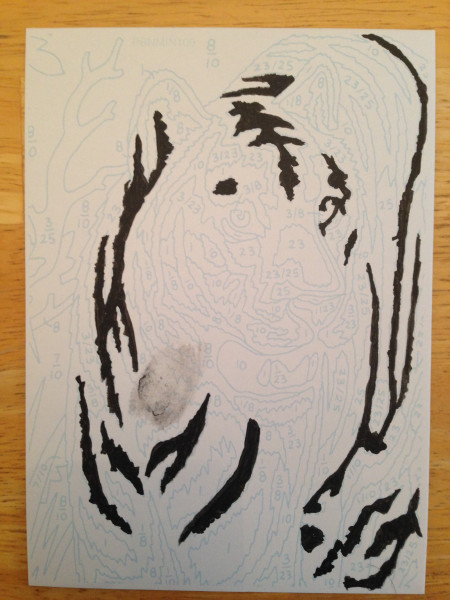 That was so much fun that I didn't pick it up again for 6 more days. On Saturday, February 7, I added 2 more colors, including the first one that I had to mix two colors together to make.

Some of the smear covered, and my first mixed color—
the gray, mostly in the upper left corner. 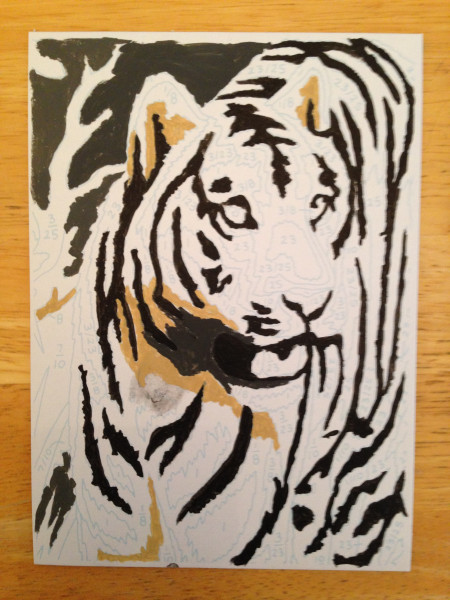 They provide a separate sheet, which duplicates the canvas markings, so you can look back at areas that you've already painted over. I thought it would be a good idea to highlight the areas I'd already completed to make sure I hadn't missed any of the number I was currently working on.

The instructions suggested using a glass dish to mix your paint together on, so I got out my best crystal olive and pickle tray and used that.

Painting progress, highlighted confirmation sheet,
and crystal dish serving as both a palette and a brush cleaner. 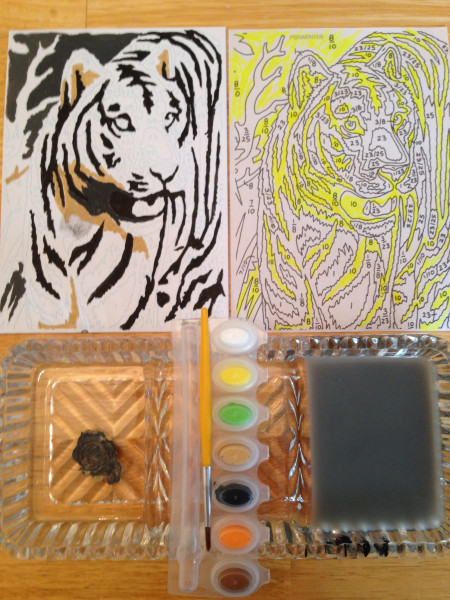 My thoughts and observations after mixing my first color: I am a big rule-follower and it was frustrating to me that it didn't say how much of each color to mix together, so I assumed it was 50-50, but that didn't help me decide how much to mix. One drop of each? Two? Three? I was terrified of running of out a color, even though Bob had said he never ran out of any while working on his.

But, in fact, after doing all the black, and using some to mix for the gray, it seemed clear to me that I was going to run out of black, because there were at least two other colors to mix that required the use of black. Desperate times call for... measuring spoons!

Two drops of each color, which didn't drip at the same rate or volume,
rendering the measuring spoon virtually useless. 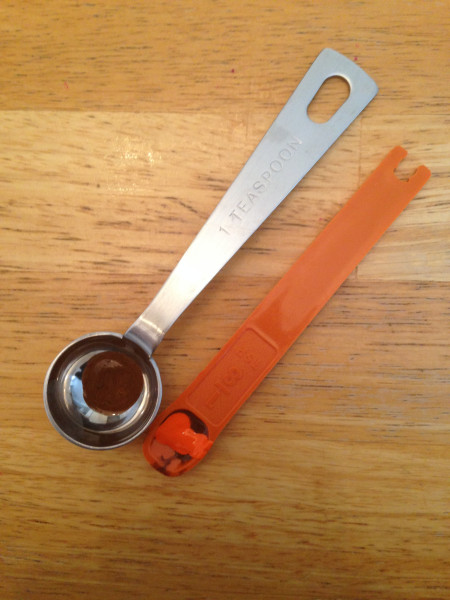 Oy! After this fiasco, and getting past the nagging inclination to jettison this whole project, I accepted that fact that I was definitely going to run out of some paints and decided to take action on that.

Trying desperately to remember where Bob said he'd bought the paint-by-number sets, I confirmed that it was A.C. Moore, and I went there and bought the 8x10 set of a similar picture that used the exact same paint colors as mine! It's hard to articulate how much pressure this took off me. 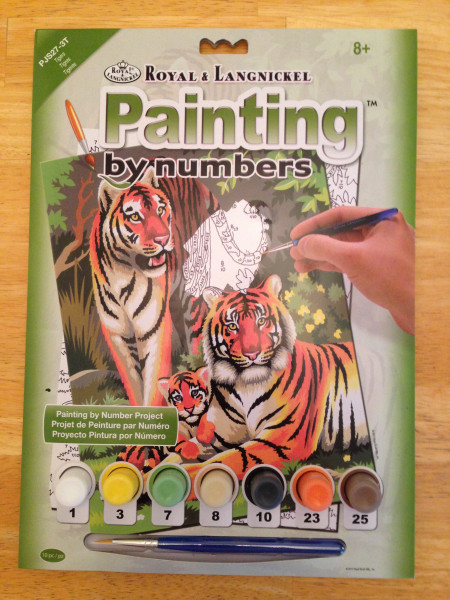 Getting more into the colors that needed to be mixed to create, I realized that I needed to keep at least the previously-mixed color around after I was "done," in case I later saw a spot I'd missed with it, so I put another metal measuring spoon to use.

All of these measuring spoons for mixing precluded my need for the olive and pickle tray palette, so I substituted plasticware for my cleaning bowl.

And an unexpected perk of my new paint set was an extra brush! This was kind of welcomed, as the original one was starting to fray a little, which made it hard to paint thin, straight lines with, and I still had over half of the thing yet to go! Although, unfortunately, the new brush was thicker, since the painting was bigger, and it was even harder to paint thin, straight lines with it.

My new cleaning bowl, an extra brush, and a new metal
measuring spoon in play! Can it get any more fun??? 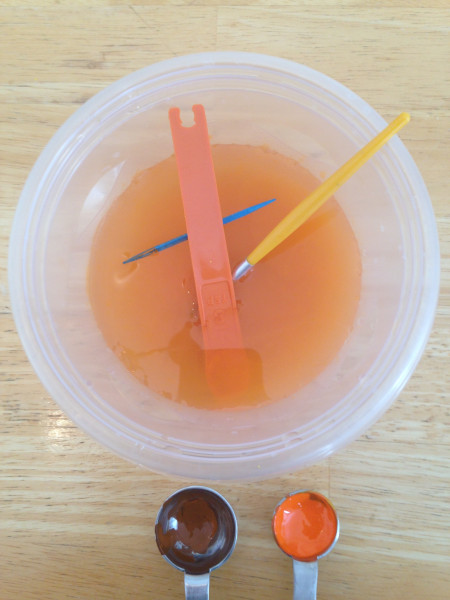 In this next update with my new paints in the picture, you can see that I was so excited to start up again that I started painting with the orange paint on the highlighting sheet instead of the canvas! 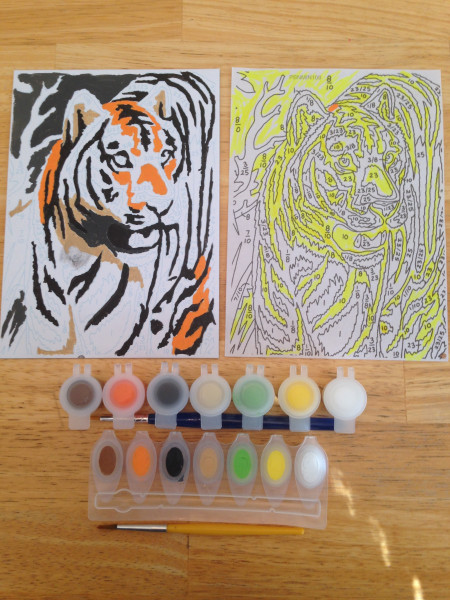 I was thrilled to finish up this little project 3 days ahead of schedule, as I was pretty sure I'd be up the night before, or the day of, finishing it up.

If you'd've asked me before I started doing this how good I thought I'd do at it, I would have way overestimated my ability.

If you back up real far, and squint real hard, it barely reaches acceptable. However, if you could measure the blood, sweat, tears, and love I put it into it, you'd need at least: 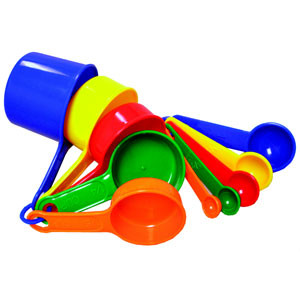 And here is the completed masterpiece.

Go ahead, back up from it as far as you can, and take a look! 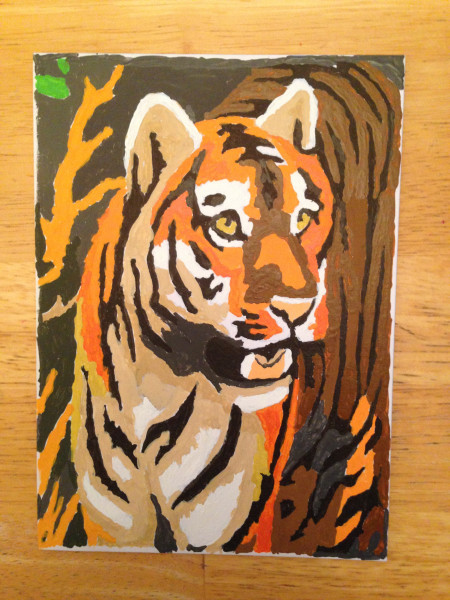 Sorry if that didn't help.

Have you ever done a paint-by-number? If so, what was your experience? If not, do you think you could do one now?
Collapse