Tonight I participated in an open mic event for the second time. This open mic is for poets and musicians, and there's usually quite an eclectic mix of each.
John Martin blazes through 12 haiku on grammar, sea turtles,
men in kilts, and cafeteria divider trays. 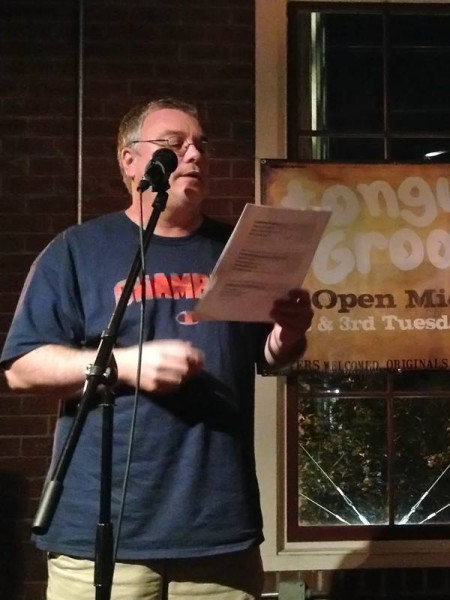 It was a lot of fun, and the crowd was very affirming. I'll let my quasi-transcript of tonight explain my "shtick."

Good evening. I'm John, and I'm in a Facebook group of folks who are striving to post a haiku-a-day for the entire year. So, I've written 256 to-date, but I'm only going to subject you to 12 of them tonight. Here we go.

I’m a word nerd, and I love that there's a word for when a word is injected into the middle of another word. Does anyone know what it is? An audience member, Eleanor Mehlenbacher, correctly identified the word!

I was driving into work one morning, and I got behind someone with one of those “license plates for a cause,” which inspired this one.

This one came to me on the way back from a weekend in Wilmington.

This is another word nerd one. I was inspired to write this one upon my excitement in learning that there is a different term for “going comando” when it’s specifically under a kilt.

Several of you in the audience know that I'm retiring on my birthday, October 13th. I wrote this one fairly recently when I began considering "the big picture" of it all.

Recently on a work-related beach trip (obviously I work for a great company), I was inspired to write this one when a colleague cooked this breakfast item for us; it also alludes to a quirk of mine that goes back 40 or 50 years, which is to say, to my childhood.

I wrote this one on July 3, after purchasing a restaurant's specially themed bagels for the 4th of July.

I just love punny haiku. Here's another one.

Gathered all around
For the reading of the will:
A dead giveaway

I edit for a living, and one day I was contemplating how much my job has changed over the 33 years that I’ve been working, and this thought occurred to me.

Here's another word nerd one. I'm always thinking about words.

This is a thought I have each year as the North Carolina Gay & Lesbian Film Festival rolls around in August.

And I’ll close with yet another punny selection.