~Friday~ Today, Bob and I had the honor and pleasure of attending the wedding of our very good friend Michael, and his partner of 23.5 years, Terry, as they got legally married in Washington, DC at the historic Dacor Bacon House.

The house was built in 1824-1825, and during the years 1831-1833, Chief Justice of the Supreme Court John Marshall (and a former Secretary of State), Associate Justices Joseph Story, William Johnson, Gabriel Duvall, Smith Thompson, John McLean, Henry Baldwin, and several other members of the Supreme Court boarded there. 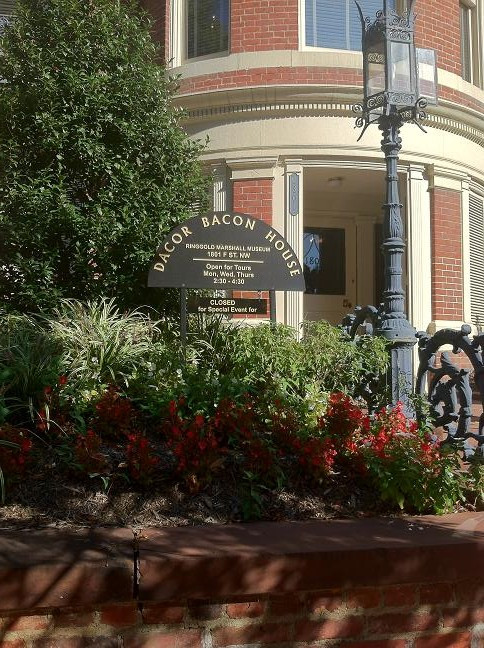 And here I am pointing out that the historic home, usually open for tours, was reserved for an event today. 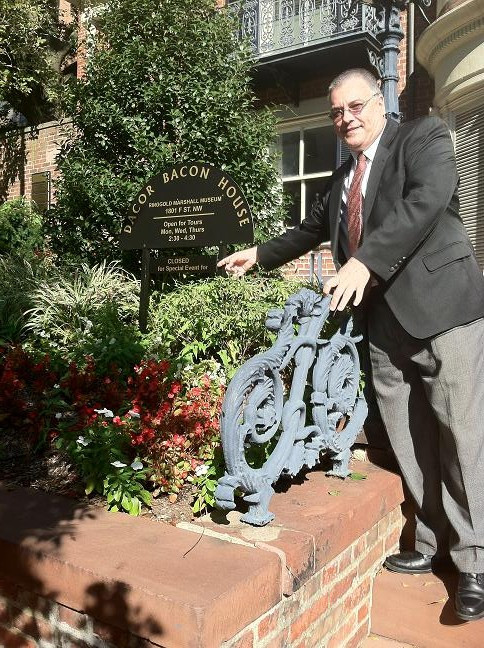 Unfortunately, most of my pictures are of quite poor quality, but I'm including them here anyway for my memories. My iPhone is on the blink for reasons other than the camera, and now I'm wondering if it's not also affecting the camera. That's certainly more palatable than blaming the poor quality of the pictures on me. 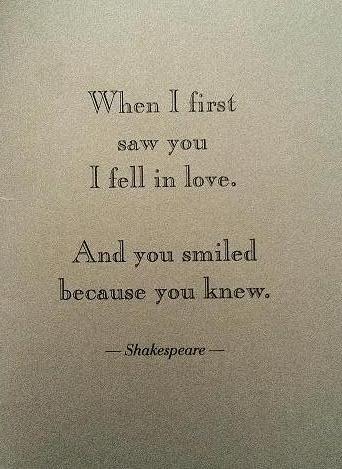 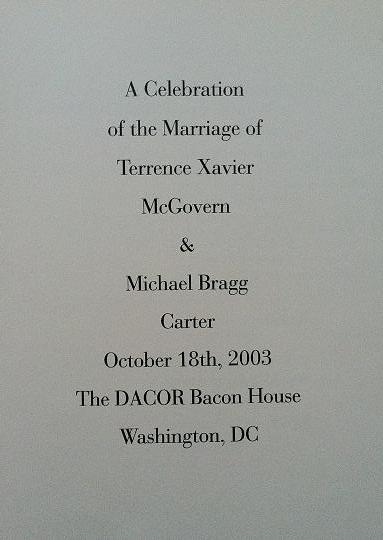 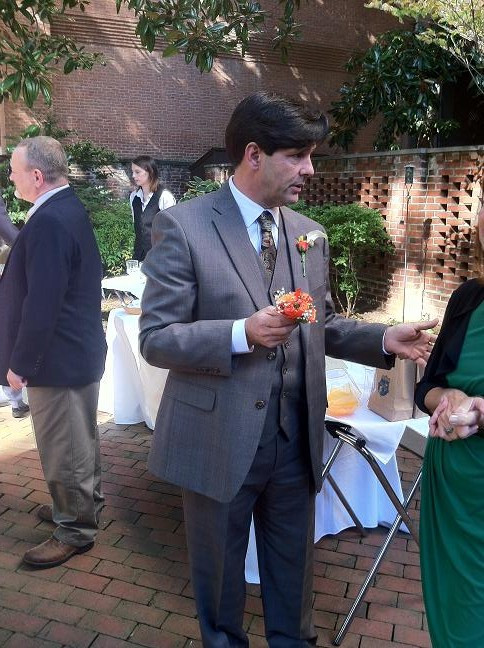 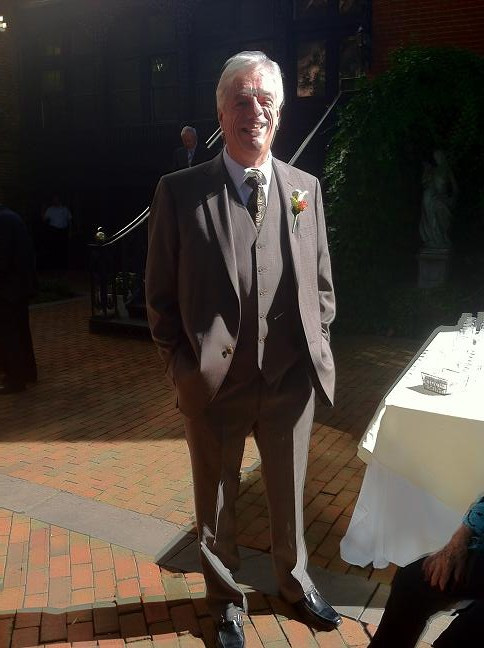 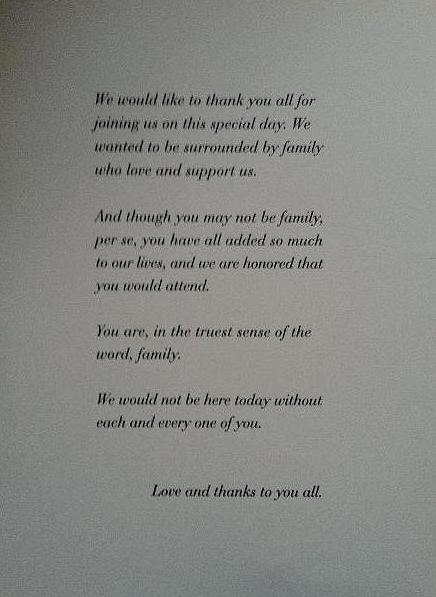 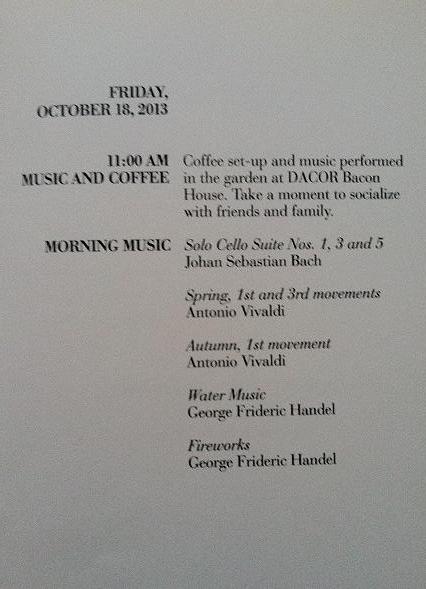 Coffee and Juice in the Garden 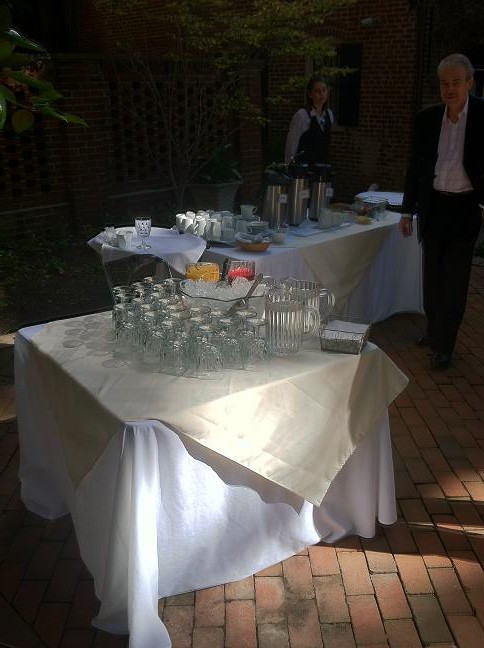 Music in the Garden 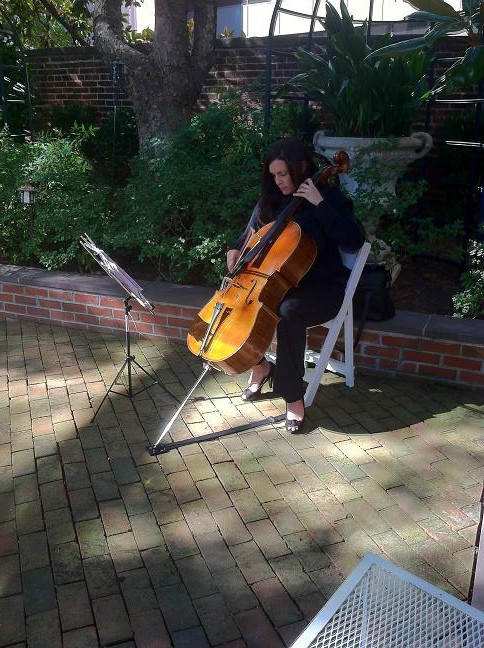 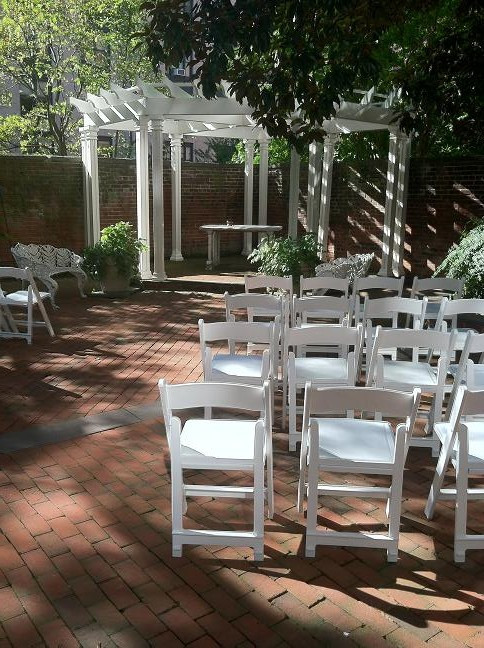 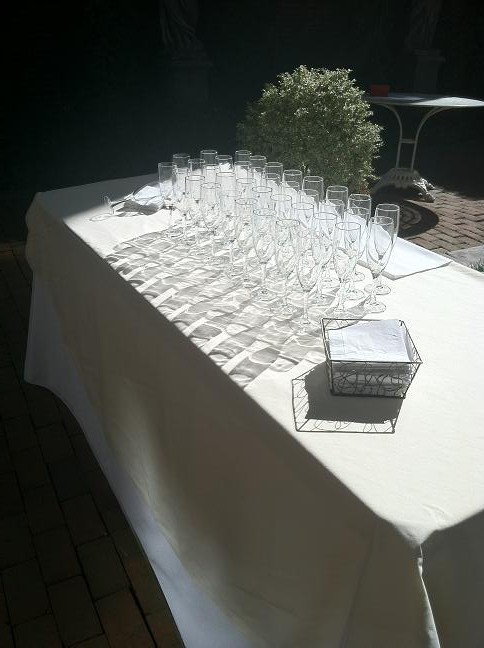 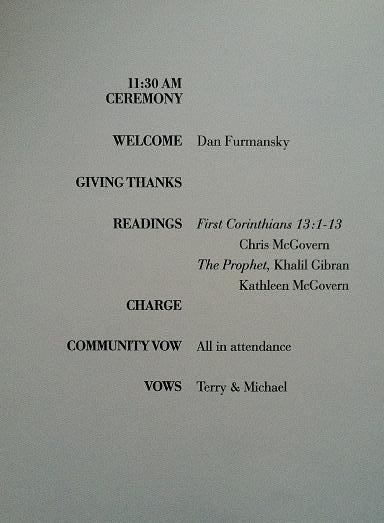 It was a very moving, thus emotional, ceremony. When it was all said and done, there were very few dry eyes in the house. The officiant was amazing, and I thanked him for his work afterward.
I particularly liked a part of his officiating during which he acknowledged that most likely many of us present have been on a personal journey over the years with regards to the understanding and accepting of what we were here today to witness.

Terry and Michael Listening to the Officiant 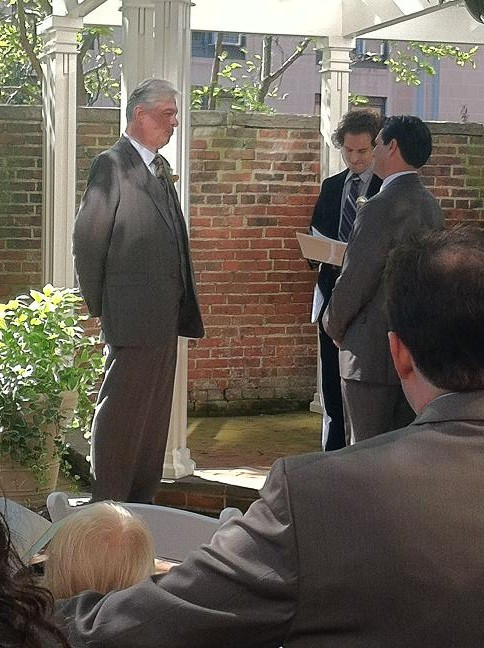 Terry and Michael Receiving Affirmation from Everyone Present 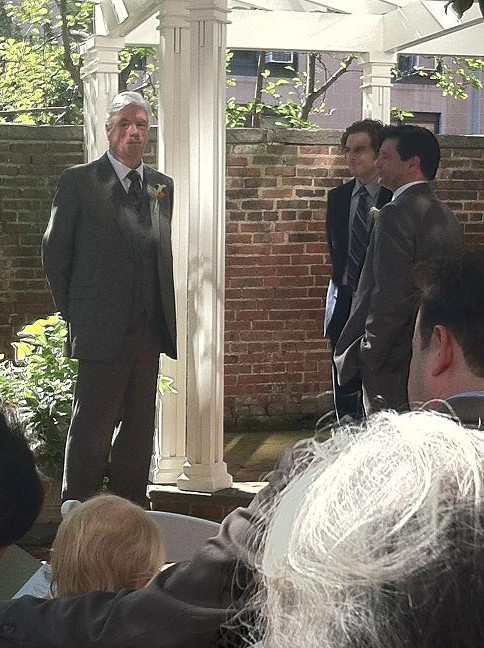 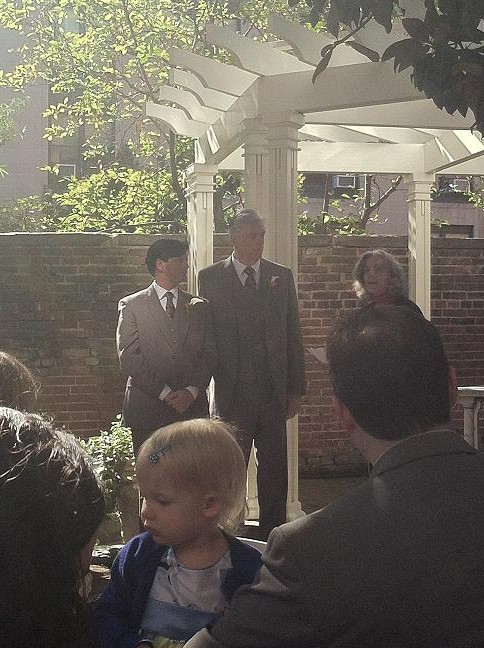 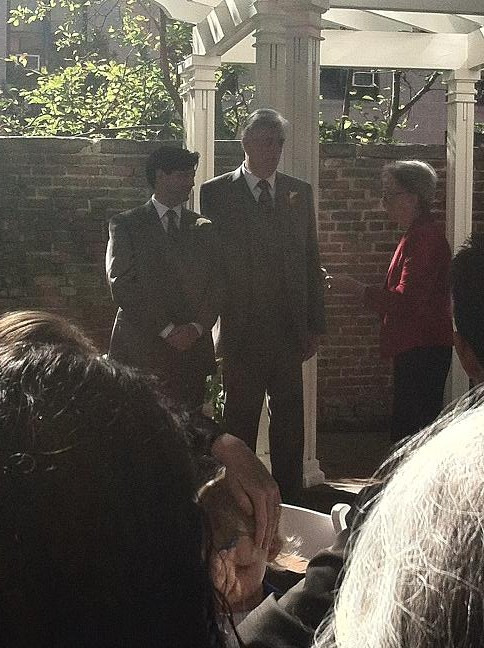 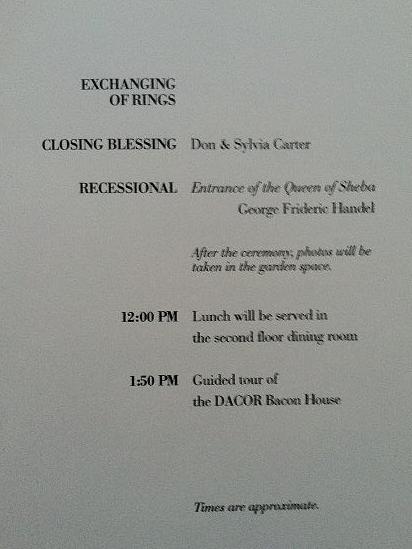 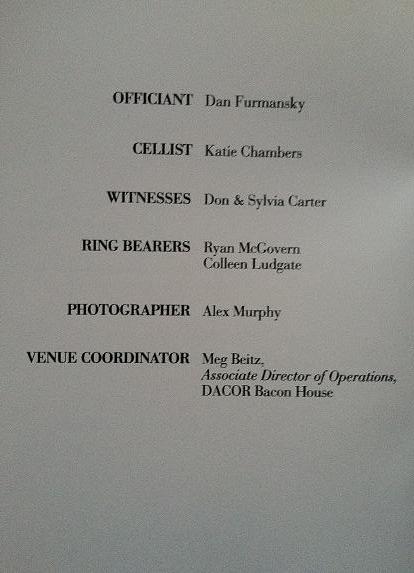 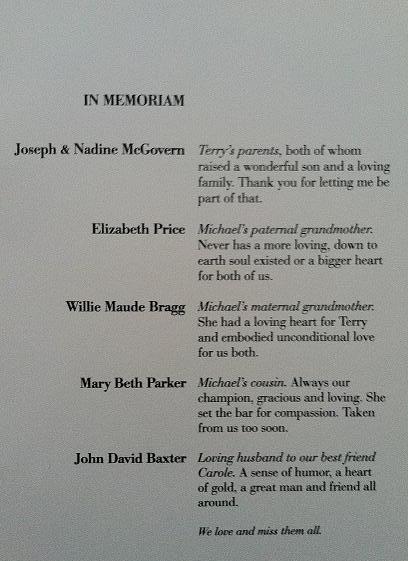 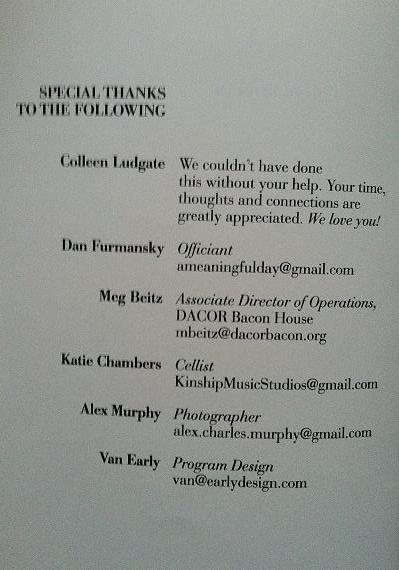 With Bob in the Garden 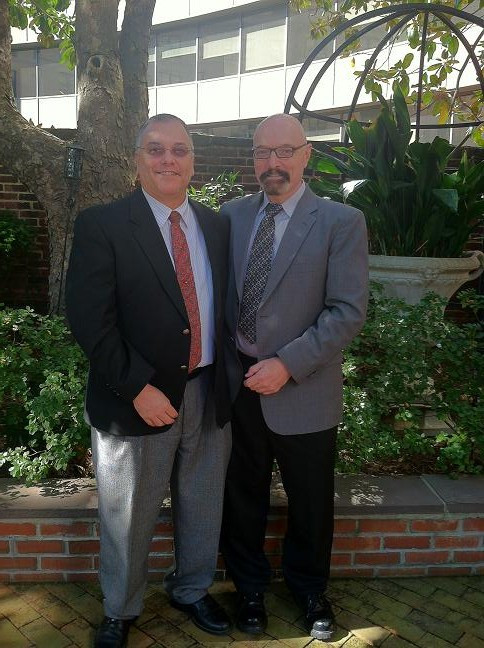 We had a most delicious lunch after the ceremony, and had interesting conversation with the folks we sat with. I was too busy eating to take any pictures.

~Friday~ Imagine a road near to you that has a 25 MPH speed limit, and think about how slow that is. Now slow that down by 5 more mile per hour. Got it?

On our return trip from DC today, Bob and I traveled in traffic for an hour-and-a-half at an average speed of 20 miles per hour. Can you imagine how excruciating that was?

In an effort to take my mind off the situation, or perhaps in an attempt to keep me from saying, "This is ridiculous," or This is crazy," one more time, Bob suggested a game.

He started off by saying, "I'm going on a trip, and I'm taking an apple."

Not being familiar with this game, but using my powers of deduction, I replied, "I'm going on a trip, and I'm bringing a banana."

He then said, "I'm going on a trip and I'm bringing an apple, a banana, and carrots."

Then, I "got" how the game worked, although I was at first reluctant to repeat the previous list items, but eventually started doing so.

This is what our final list ended up being:

After we'd been going 70 MPH for quite a while, I said to Bob, "When did the traffic break, somewhere between lard and muff?"


After that we played a game where the first person says the name of a famous person, and the next person has to name someone whose first name begins with the last letter of the last name of the previous person named.

We started off with famous real people, but ended up including fictitious people, such as characters in TV shows and in books.

Last names ending in y became particular problematic for the next person the longer the game went on.


I had never played either of these games in the car as a kid, at least I don't remember them if I did.

If my sister is reading this, perhaps she can confirm or deny these musings.


What games did you play in the car as a kid?
Collapse