~Sunday~ I slept in this morning, and when I got up, I had a hankering for some French toast or some pancakes. I checked Daisy Dukes' menu online, and they didn't have what I wanted.

Then, I remembered yesterday's wonderful experience at: 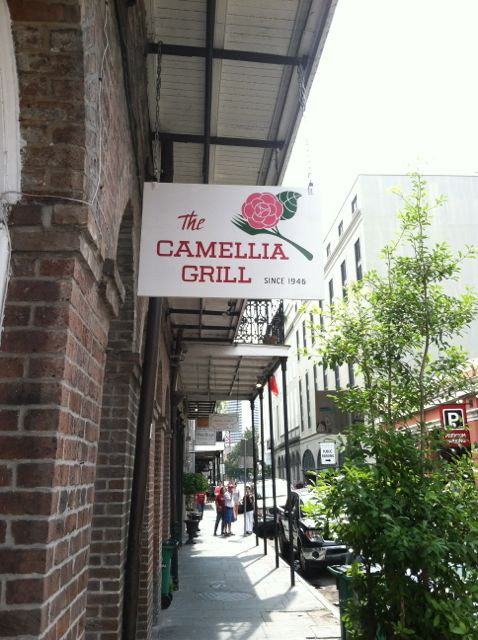 and I went back there for breakfast today.

Unlike yesterday, there was a line today, and when I moved up to the third position, I noticed there were two single seats that were available, and I motioned to the hostess that I was alone, and she said, "Oh, good. Take either one."

I chose a seat in the section opposite Roland's, whose section you'll remember I sat in yesterday and who was so great, but as these things often do, it turned out to be a fine decision.

As soon as I sat down, the two people sitting to the right of me left, and the couple that was in front of me in line (we hadn't spoken while in line) took those seats, and they turned out to be fun! Well, the lady was fun. The guy was quiet, but he was very nice.

At one point she said, "The food must be good here, look at the line now."

"IHOP? You're in New Orleans, and you wanted to go to an IHOP?"

She laughed and said, "Yes. I know it's going to be good there whenever I go, and I want good food."

"I don't think you're going to be disappointed here," I said, "And it's fun here!" I added.

I went on, "Yesterday, I sat over there, and at one point Roland over there, got behind the man who was five seats to my right and he said, 'Ladies and Gentlemen! Can I have your attention? Sitting right here, we have the multiple Grammy Award-winning, Mr. Kenny G!'"

"Yes, it was," I said showing her his picture on my phone.

She leaned toward me, "Let me ask you something. If they hadn't said it was him, would you have recognized him?"

I said no, and I told her my story about seeing him in Nice 20 or 30 years ago, when he had black hair.

Then as an afterthought, she looked right at me and said, "You're not famous, are you?"

"I'm gonna be obsessed about this now," she said, and then pointing across the way, "For a minute I thought that guy over there might be famous. But then I remembered he was just in the hotel elevator with me this morning."

Our server arrived in front of us and took our orders. The lady went first, and she wanted an omelet made only with egg whites, and when she asked if he could do that, he said, "I can't do nothing. I have to ask chef. See what he say."

Then he asked her husband what he wanted, but before he ordered he said, nodding at me, "Actually that gentleman sat down before us," but the server said, "It's okay, I'm going to put 'em all in at once."

"Thank you," I mouthed to him, and he nodded back to me.

I ordered pancakes, link sausage, and an egg over easy.

The couple's food arrived before mine (and she did get her egg white omelet), and then my over-easy egg arrived by itself on a plate. It was taking a little too long for my pancakes to arrive, and then I heard my server say to the other one working with him, "You got my pancakes, bro!"

Turns out the guy sitting across from me had ordered pancakes, too—after me even, but he got his first, because they were mine, of course. I waited while "chef" cooked up another order, and when I got them, the sausage wasn't with them. 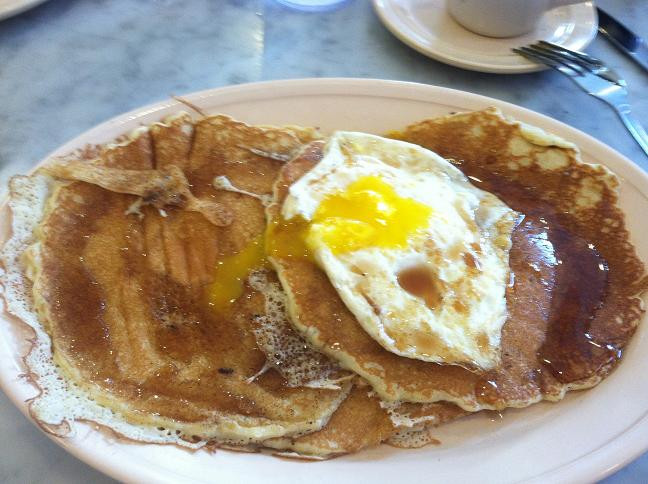 I know you're disappointed I didn't take a picture of the sausages when they arrived.

My server apologized, and when I did finally get my sausage, he said, "I gave you two; sorry for the wait." Two doesn't sound like a good compensation, but they were big links—about the size and girth of a... roll of quarters. Had you going there for a minute, didn't I?

I left a $5 tip for a $7 meal, because it was good company, good food, and service made good when it might not otherwise have been.


On my walk back to the hotel I came upon a bookstore, which I'm hard-pressed to ever just walk by. 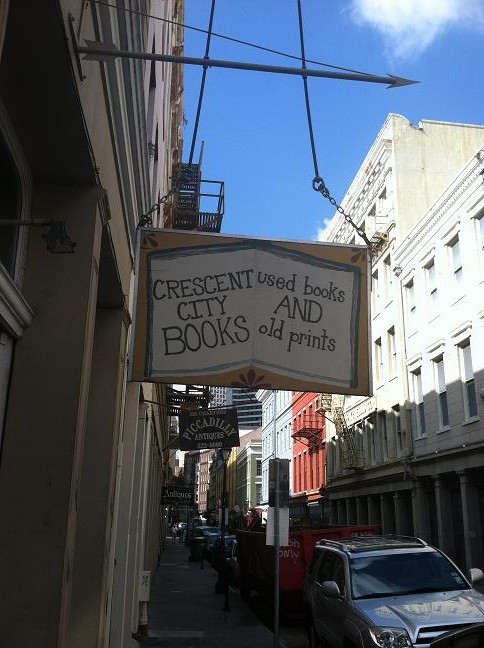 I spent about 15 minutes in here, enjoying the air-conditioning—and truth be told, a cute guy skimming through some books in the Gay & Lesbian section. Oink. Oink.

When I'm in an independent bookstore, I sometimes daydream about owning and running one myself, and one thing I thought about this place was that it needed a good inventory overhaul.

When you start having piles of books in front of other books, this gives two impressions, at least to me: 1) I see signs of hoarding, and 2) it sends the message that you don't care enough about the customers to make it easy for them to find something they are looking for or to catch their eye with something they might not know they are looking for, the latter being the more egregious of the two. 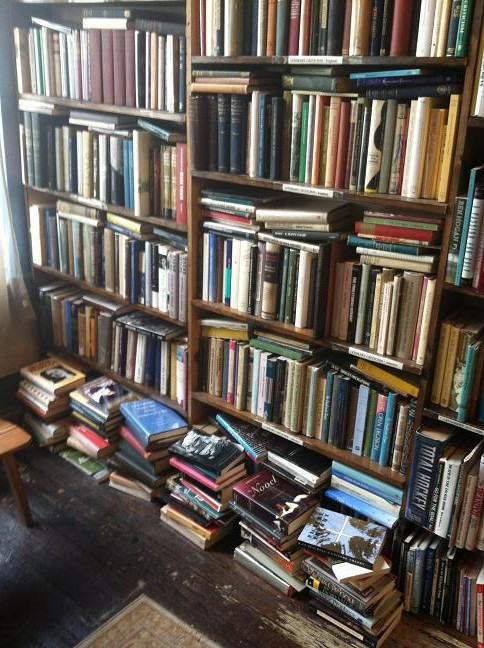 Oh, don't worry, that thought of owning and operating my own bookstore is always an ephemeral one. All it takes is one look at the headlines about the viability and financial issues about independent bookstores.

At about 1:00, I started making my way to the Southern Decadence Parade route, having looked it up online, and while walking, I checked in with Amos to see if the group was meeting somewhere. He told me that some of them were at the 700 Club, which is just a great name for a gay bar, and by which they'd confirmed the parade was going to pass.

Knowing I was going to be drinking—and had already started back at my room, truth be told—I stopped for a slice of alcohol-absorbing pizza on my way to meeting the group: 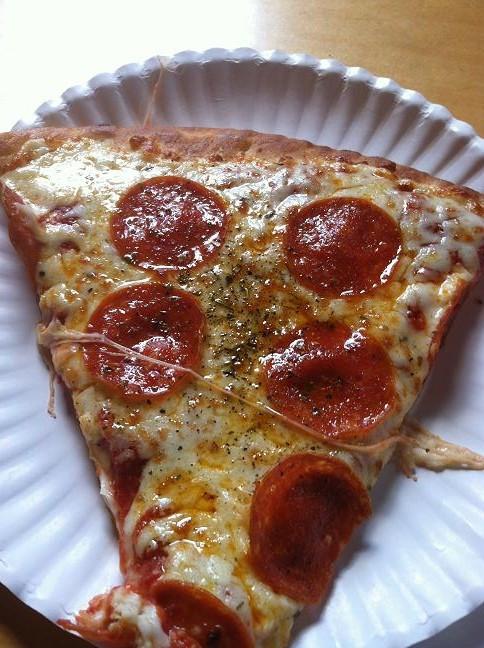 And, yes, that pizza was as delicious as it looks.

The parade started at 2:00, but we were far enough into the route that it was closer to 2:30 before it reached us at: 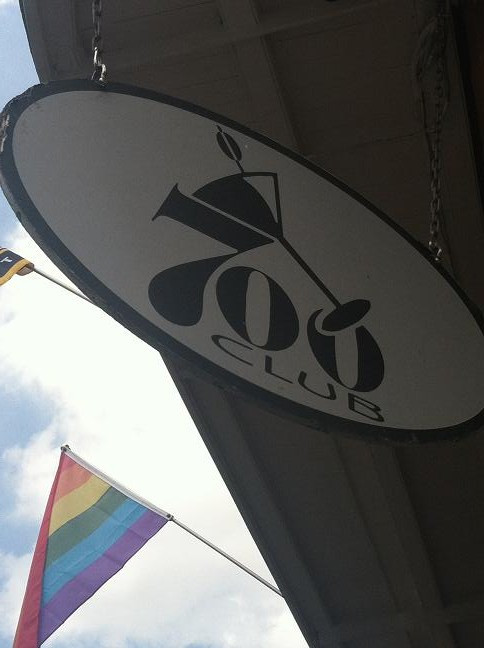 I had taken a few minutes back at my hotel to delete about 30 pictures from my phone, as I've never checked its capacity, and I had no idea if I was even close to running out of space on it, and I wanted to not worry about that while I was taking pictures of the parade.

In retrospect, that's funny, because I took about six pictures, which was pretty much the entire parade. After what we thought was the first section of it had passed, and enough minutes after it to start realizing that that was the end of it, the immortal words of Miss Peggy Lee where heard everywhere, "Is that all there is?" 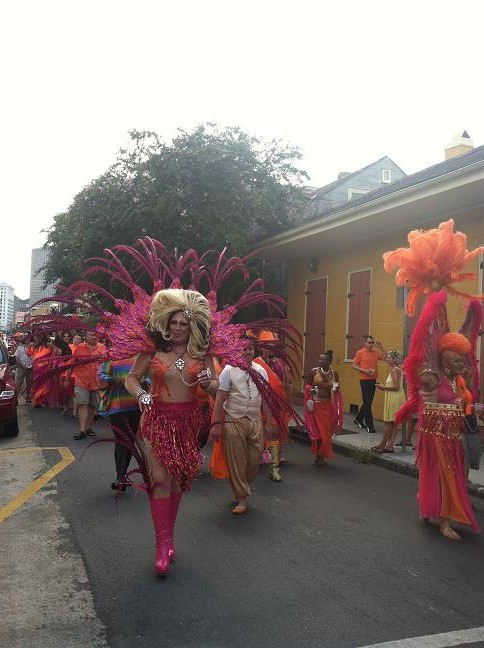 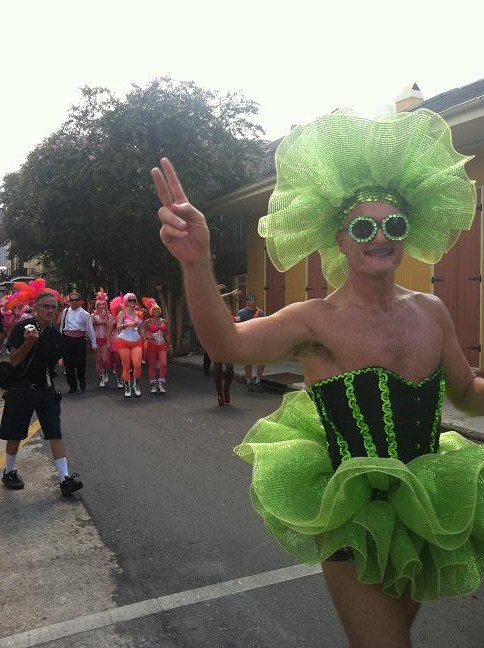 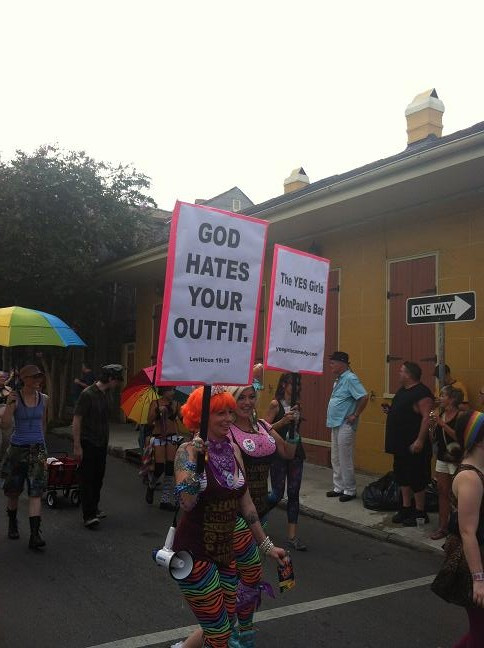 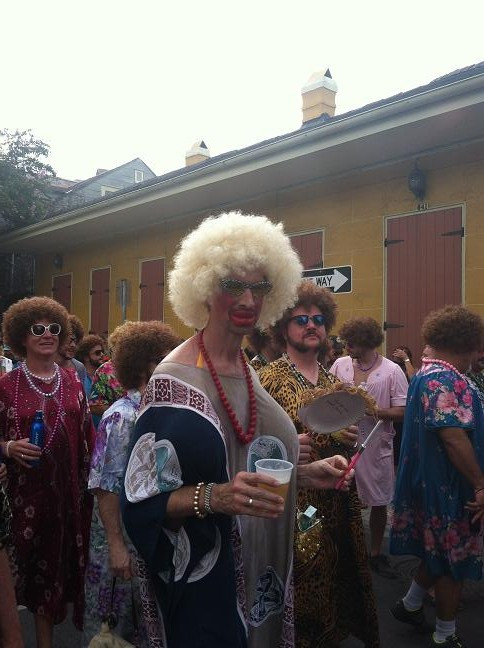 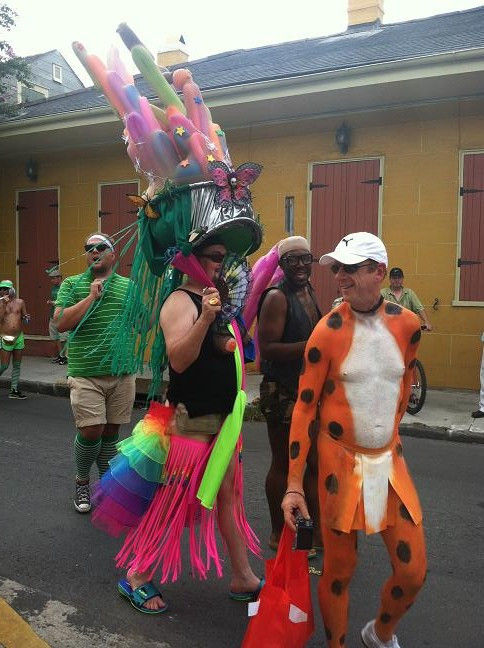 Not too much later, the bottom fell out in this downpour that I ran into making my way back to Bourbon Street: 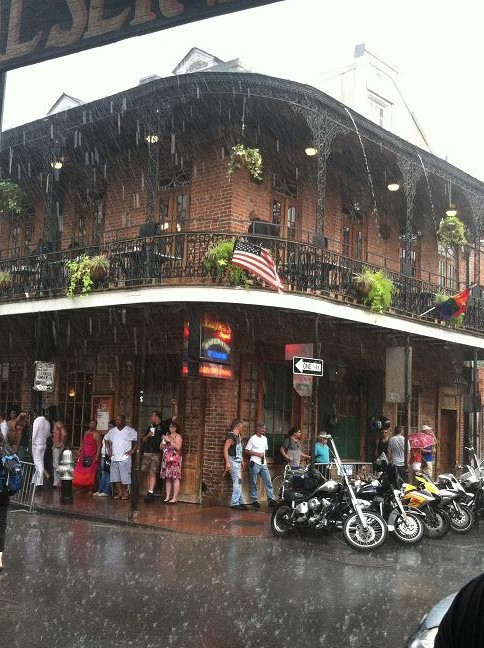 When the rain finally let up, I started making my way back to my hotel, walking down Burgundy Street instead Bourbon Street, and I just happened to come upon Rawhide, which turned out to be one of those places that puts the word stays in, "What happens at Southern Decadence stays at Southern Decadence."
Collapse