~Saturday~ I didn't know it at the time, but this would turn out to be my favorite day of my four-day vacation.

I wanted to do some writing today, so I found a nearby coffee shop—the Royal Blend Coffee & Tea House—on Royal Street (of course), which was on the same street as my hotel, about five blocks away. 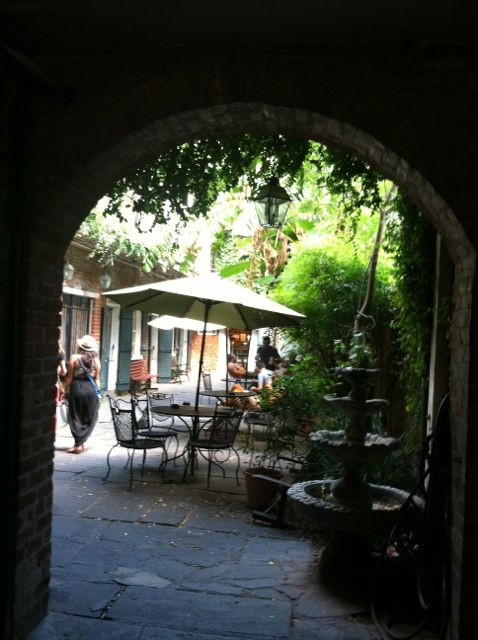 It had a nice courtyard with the actual shop being in the rear, in which I bought some coffee and a bagel.

As pretty as that courtyard was, I chose an inside seat—out of the heat and humidity—since I planned on being there for a while.

No sooner had I sat down, a girl carrying a guitar case took a seat nearby, and after settling into her seat, she took out a cell phone and proceeded to have a long, loud conversation that was impossible to ignore.

Snippets of her conversation included:

"I'm supposed to write down how many times I say the word 'feel,' which is proving to be very interesting." The fact that she said that word five times within the next five minutes, with no pause of self-awareness, told me that she was only supposed to be doing it, but actually wasn't.

She went into a long story about how a friend of hers tries to give her advice when she talks about how hard things are for her, which after listening her long enough I definitely got the feeling that that was most times she talked to that friend. "I feel (#6) like she doesn't listen to me. She doesn't know me. She suggests I do things that I know aren't going to work. They're just not me."

The person on the other end said something, and then she said, "I don't know how a person like you, who hardly knows me, can be so generous and give so much to me. I can't give like that." And then she started crying.

She went on to cry about supposing to be in California in a month, and having no idea how she was going to get there. "I have no money. The girl I'm staying with charges me just $2 a week for rent. And I was late with last week's, and I have no idea how I'm going to pay this week's."

In retrospect, I've got to believe she said $20 and not $2, but that aside, she did figure out how to pay for a $2 cup of coffee in a coffee shop, and she obviously has a cell phone plan—assuming it wasn't actually a scam, her not really talking to anybody on the other end, but trying to gain some sympathy from me for some kind of solicitation.

"I feel (#7) like I can't establish a foundation. I keep moving around. As soon as I start making friends and start building a foundation, it's time to leave again. I feel (#8) like I'm always starting from scratch." More tears.

At this point, I had to put my earbuds in to preclude me from listening any further. Mercifully, she left about 20 minutes later, without approaching me.


I left there after a couple of hours, after completing my Friday blog entry, and I stopped by my hotel room for a little while.

Before heading out at about 2:30, I Googled the Camellia Grill, which had been recommended to me back in Raleigh from someone who used to live in New Orleans, and shortly after that I headed over there for a late lunch.

What a great experience this turned out to be! I was seated in Roland's section, who was an absolute hoot! He had all of the customers around his counter smiling and laughing. 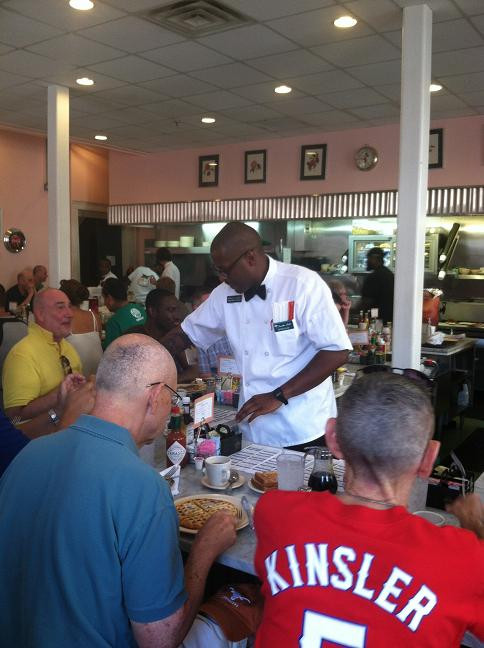 After he took a few orders, he went over to a customer that was sitting five seats away from me, and he shouted to the entire restaurant. "Lades and gentlemen? Ladies and gentlemen! May I have your attention, please? For just a moment!"

When it got quiet, he raised his hand over the customer and said, "We have a multiple Grammy Award winning performer dining with us today, Mr. Kenny G!" 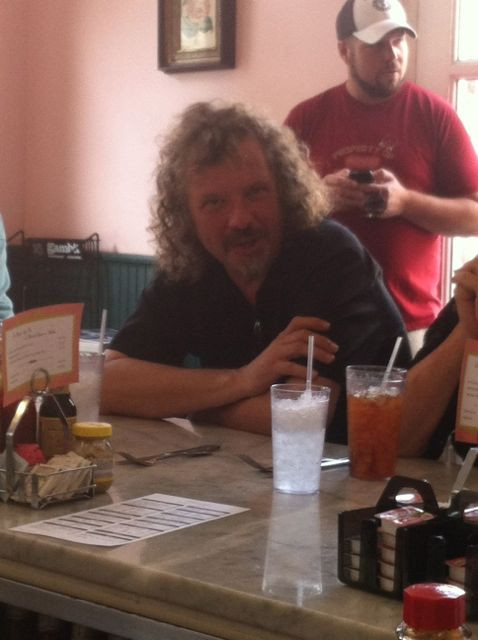 I got all verklempt, as I was first introduced to Kenny G in the early 80s when I was on a six-week business trip to La Gaude, France, which is in the South of France, pretty much on The Riviera. In fact, my hotel room for that trip was waterfront of the Mediterranean Sea, at a cost of $600 a night.

While there, I saw an advertisement for the Nice Jazz Festival, and although I wasn't a huge jazz fan, I thought, "Why not? It's here. I'm here. And I might see someone famous."

And what I arrived at was Kenny G's performance. I had no idea who he was, but I was absolutely mesmerized, and I distinctly remember thinking, "Oh my god. What incredible music. This guy is going to be famous one day." Within the year, he had exploded onto the scene.

Today, Kenny was with a female companion, and he actually seemed shy and embarrassed about the recognition, which is the only thing that precluded me from rushing over to him, telling him the same story I just told here, and asking him for his autograph.

Next Roland said, "And one last thing, while I have your attention. It's Beth's birthday today!" He pointed to the girl sitting directly to my right and added, "Happy Birthday, Beth!" And then to all of us, "Help me sing Happy Birthday to Beth." Which we did.

I got their Breakfast Po-Boy, which might have been the best damn thing I ate in New Orleans! 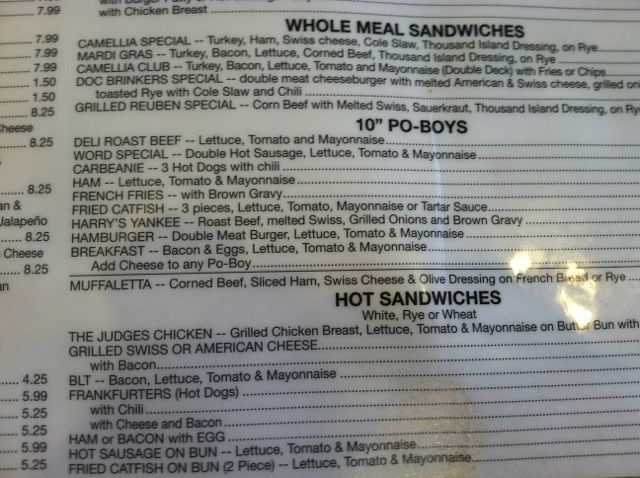 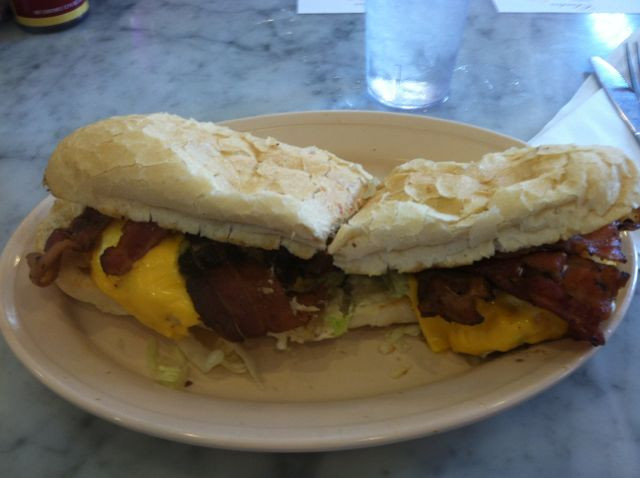 From there, I wandered over to nearby Jackson Square: 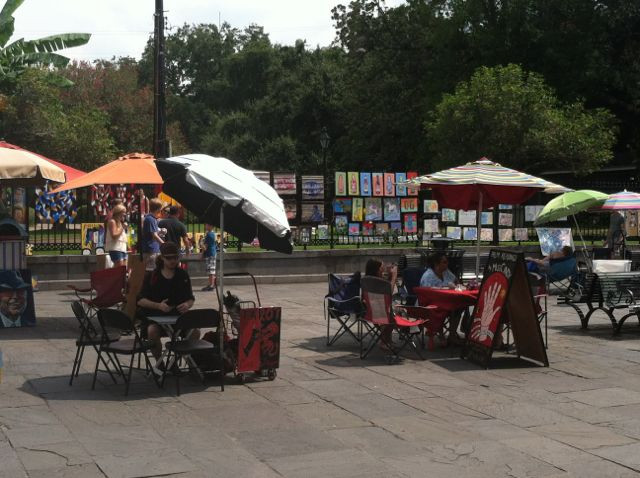 where one of the first things that caught my eye, and captured my imagination, was this guy: 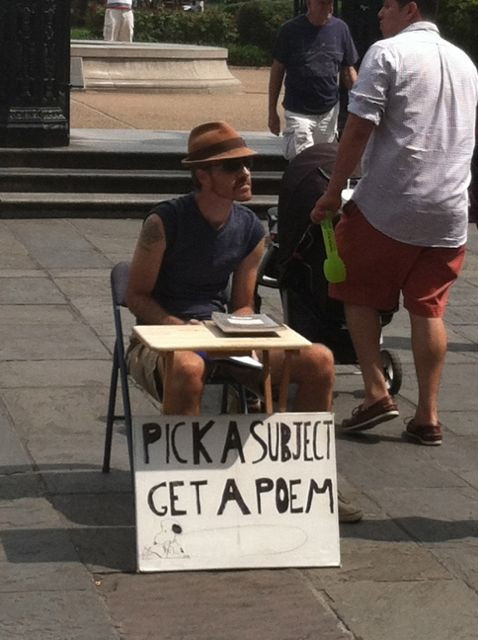 "Okay," I said. "My subject is two Cocker Spaniels—one's named Vincent and the other's named Frances."

He got out his pad and said, "Okay, tell me just a little bit about them. About their characters."

I said, "Well, they're two of the sweetest dogs ever. Frances stays busy, often digging or barking at passersby, and Vincent is the type that if he sits next to you long enough and you don't pet him, he'll take his paw and tap you a couple of times with it to let you know he's there."

"Okay," he said, "You can come back in about 15 minutes, and I should be finishing up," and he began his creative work: 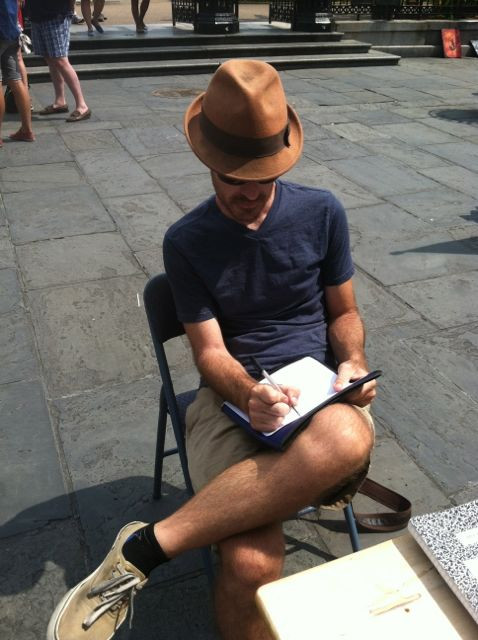 This is what he wrote, and for which I was happy to give him a twenty-spot.

Two Cocker Spaniels
loyal and friendly
barking loose tongue
and fancy free
determined to love
and be loved in return.

Couch companions
who bury their nose
in your neck,
nuzzle their way into
your heart
one panting breath at a time.

Here are a few other things that caught my eye as I walked around today: 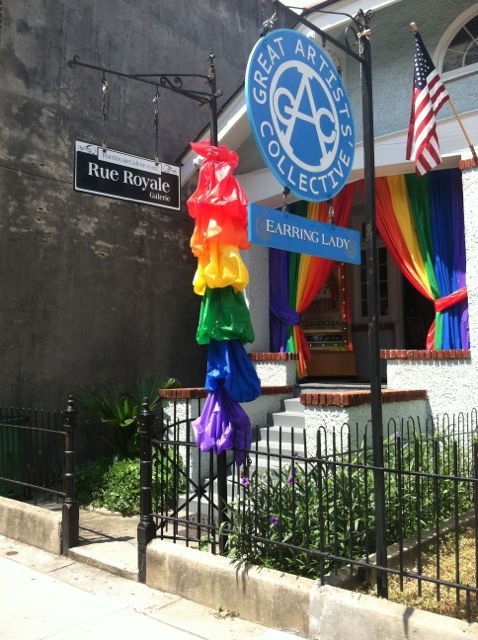 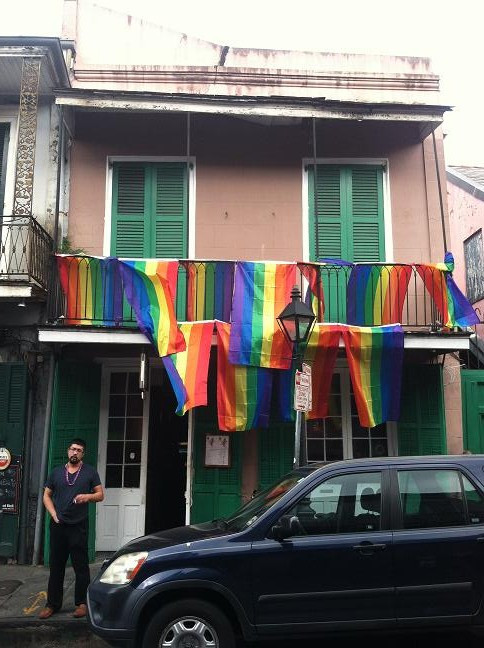 A reminder that street drinking is not only legal, but encouraged! 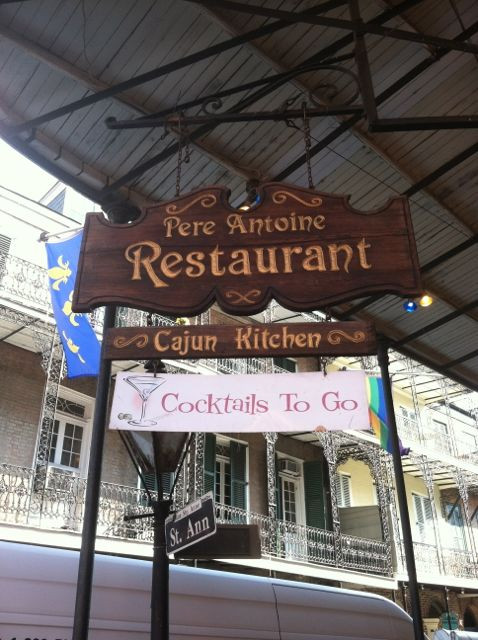 I like the rail work on the balcony of this dwelling. 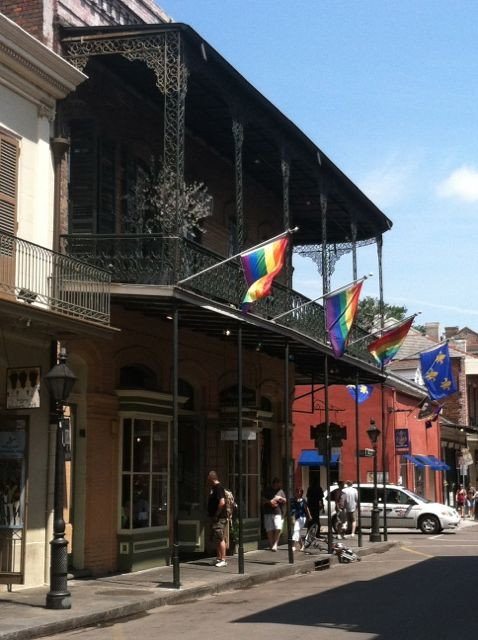 I don't own any, or even like, plants, but if you're going to have them,
this seems like a tasteful way to do it. 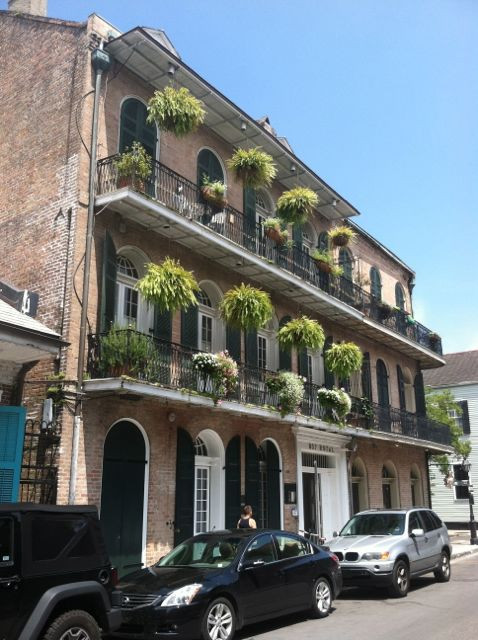 At about 6:30, I headed up Bourbon Street to check out one of the things Southern Decadence is known for, which is the equivalent to what straight guys ask straight women to do in order to get beads at Mardis Gras time.

My hotel was in the 100 block and most of the gay bars are up, starting at about the 900 block, so one has to walk past the "straight section," where on some level, I guess, the barkers trying to get you to come into the titty bars, have to assume you're straight (if you're not walking holding your boyfriend's hand), which means you get barked at often on strolling through that part of Bourbon Street." 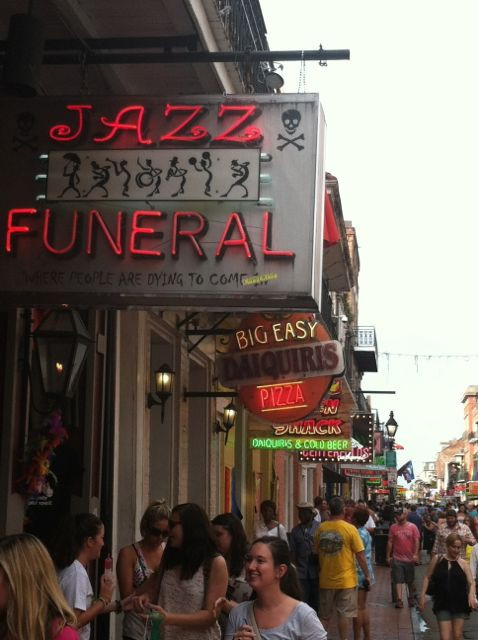 When I arrived up to the "gay section," I stepped into Oz, the bar in which we saw the dancers yesterday, and where there were dancers once again, along with the lights, music, and dancing crescendoing to a frenzy induced by copious amounts of alcohol and gyrating gay men. 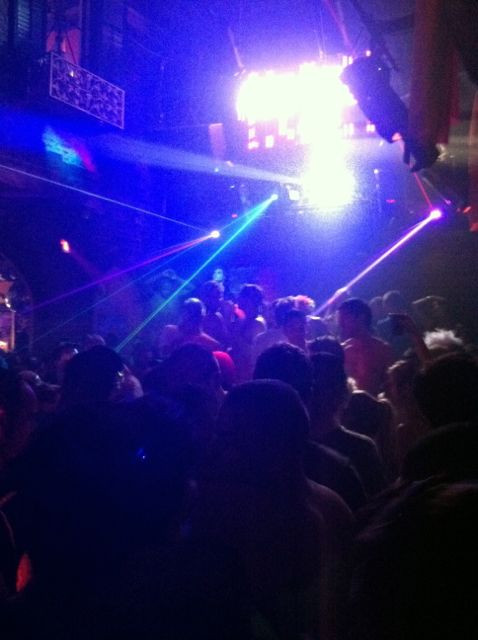 Outside, the bead-throwing and the bead-earning was in full swing, with bead-throwers on the Oz balcony, this guy in particular being the ringleader (so to speak): 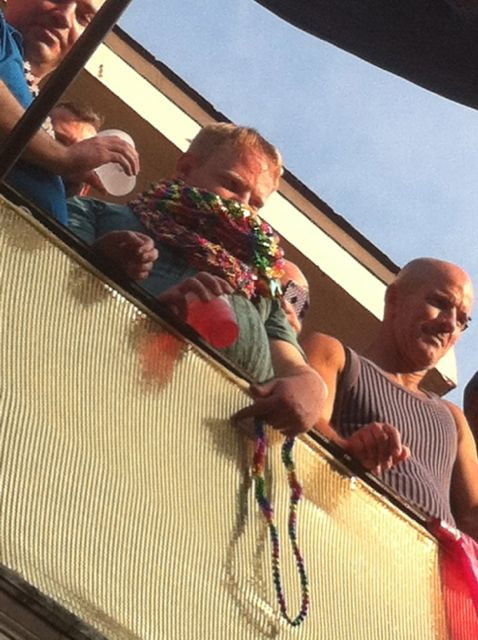 You'll have to catch me outside of my blog if you want to see a few pictures of the bead-earners.

At one point, the protesters thought it would be a good idea to parade through this revelry, even after (so I heard from someone who was there earlier) getting lube thrown on them the last time through. 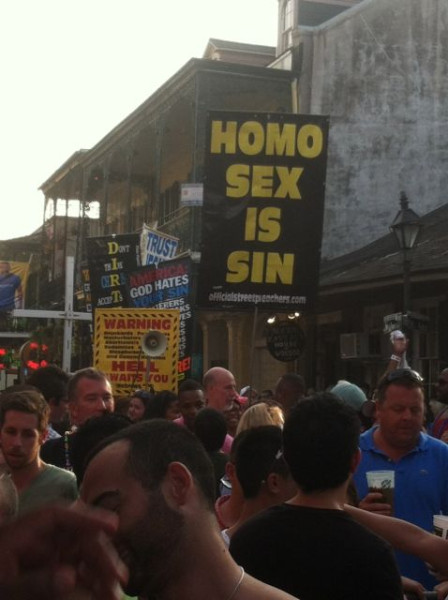 And then, a car thought it would be a good idea to drive through this throng of people, but it could only do so with the help of this guy, who in spite of his outfit, was actually helping to direct traffic. 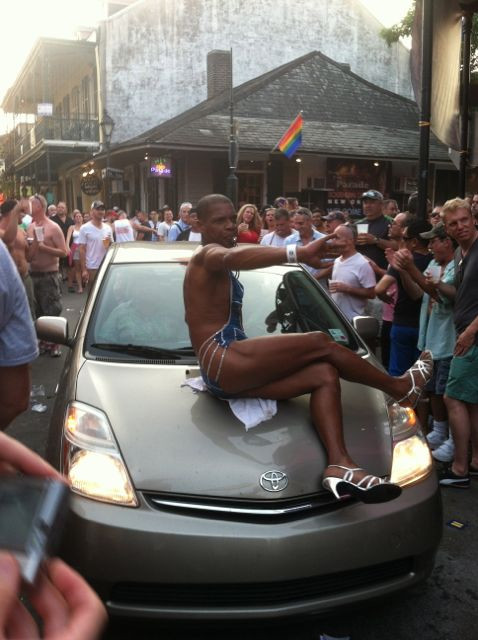 I ended up eating dinner at a place called Jimmy J's Cafe, which was right around the corner from our hotel, and where a couple of the guys from the group I was traveling with had eaten yesterday. When I entered, two of the guys from our group were already there, and shortly after that almost the entire rest of the group came in.

I had an order of Fries and a killer club sandwich there, which I only ate half of and took the rest to go.

I sat with one of the guys in our group, Stephen, who had the Shrimp and Grits, and I thoroughly enjoyed our conversation.
Collapse