~Saturday~ My friend Bob and I had the pleasure of seeing this original adaptation of interviews with former slaves from North Carolina.

The program featured excerpts from The Slave Narrative Project1 in the late 1930's, and was actually "staged" on Horton Grove Plantation—the plantation holdings of the Bennehan-Cameron families were among the largest in pre-Civil War North Carolina, and among the largest of the entire South. By 1860, the family owned almost 30,000 acres and nearly 900 slaves—in Durham, NC. 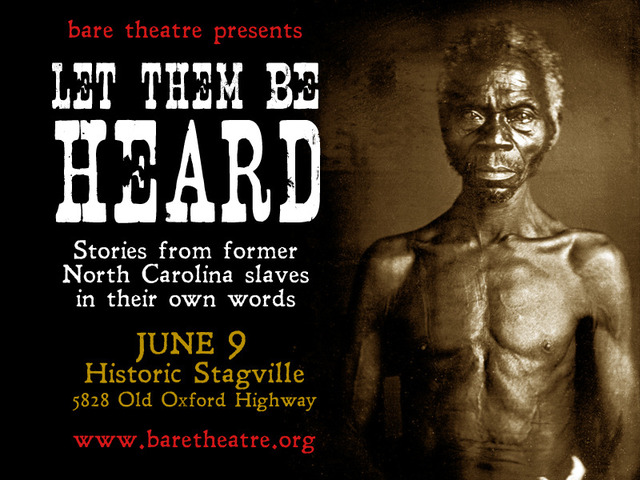 After being encouraged to put on some bug spray, more for ticks than mosquitoes, our group of 30 or 40 were led to the "set" of the first scene of the five-acts, which was held in one of the two-story buildings that housed four slave families in its day.

We crowded in, with some people sitting on the floor and some standing, facing an old lady sitting in a rocking chair holding some weaving project she was presumably working on before she fell asleep. Once we settled in, she woke up, and told her story of living on a plantation, and of her "massa' and her "missus."

For the second act, we moved into a second room, where a man was sitting on a chair in front of the room, who was a preacher as well as being a slave, and he told his story.

For the third act, we were stopped just as soon as we exited the housing area, and a woman told us her story from the front steps. I found this story to be the most riveting and compelling, partly because the first two stories had made it sound like it was bad, but not all that bad being a slave.

Well, this slave's story, juxtaposed to the previous two, packed a powerful punch to the gut.

The fourth "act" was "in motion," which is to say that our group walked along a lantern-lit (it was dark, as we'd gone to the 9pm performance) path, and on the way we "happened upon" another slave, who told us his story as we inched our way toward the "Great Barn," the last building on the property—and it was huge—built completely from slave labor.

Once in the barn, for a final act, we heard three more stories, one of which focused on the (completely valid) rage of the slaves against white people in the aftermath of Emancipation and to the person who had come to interview him for his story. Intense.

My thoughts and observations:

In conclusion, I found this performance fascinating, as well as educational, and I would highly recommend it if they stage it again next year.


1Born in Slavery: Slave Narratives from the Federal Writers' Project, 1936-1938 contains more than 2,300 first-person accounts of slavery and 500 black-and-white photographs of former slaves.

These narratives were collected in the 1930s as part of the Federal Writers' Project of the Works Progress Administration (WPA) and assembled and microfilmed in 1941 as the seventeen-volume Slave Narratives: A Folk History of Slavery in the United States from Interviews with Former Slaves.