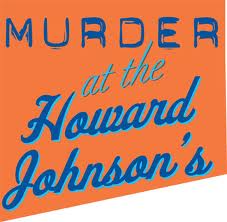 Synopsis: Is all fair in love—even murder? Self-absorbed Arlene is married to blundering car salesman Paul, who adores her. Arlene’s lover Mitchell, a dentist who fancies himself an irresistible ladies’ man, joins her to plot the murder of her husband. But wait—a betrayal shifts the alliances and the intended victim. A rambunctious suspense comedy in a Howard Johnson’s Motor Inn, where the target keeps changing and the laughs keep coming!


I left my house at about 6:00 this evening, with a wicked storm approaching, arriving at Thompson Hall on NC State's campus and parking in the adjacent deck to protect my car from any hail that might result as part of the storm.

I hung out in the lobby of the Kennedy-McIlwee Theater and killed an hour using the campus' free wi-fi and out of the elements of the storm as it blew through.

At the time I purchased my ticket, which was on Monday, I got the last ticket in the very center of the front row. There ended up being an empty seat to my left, and an elderly couple sat to my right, the man next to me and his wife to his right.

After starting 3-5 minutes late, and listening to that (I'm sure he's a very nice) man who always gets up in front of the shows in this theater series and talks way too long, the show finally started. If you're going to go on that long, start your speech at 7:20.

I thoroughly enjoyed this show. I cackled. I laughed. It became a part of me.

I just checked the Wikipedia entry on this show, and I was surprised by a couple of things:

Some of the things that I liked about this play:

And, oddly, one of the things I enjoyed the most about this performance didn't take place on the stage, but in the seat to my right. I loved listening to the man of that elderly couple just cackling into his hand at various lines and antics taking place on stage.

He reminded me of one of those curmudgeony old men who'd rather die than show any emotion, but you could tell he couldn't help himself from laughing at what was going on and being said at times during the show.

I would recommend that you go see this show, but I don't want to tease you, because all of the remaining shows are sold out, including extra shows they've added due to its popularity.
Collapse