~Saturday~ I was up at 6:00, and I put the filling in the deviled eggs, before showering and heading over to Bob's for the 2013 MICU Yard Sale. Their MICU (Medical ICU) sale was part of the larger Mordecai Community Sale (as it is every year) that was going on today.

I stopped at Krispy Kreme on the way to pick up two dozen doughnuts for the volunteers working the sale today. The "Hot Doughnuts Now" light was on, so I got a dozen of those "just glazed" ones, and then another dozen of a mixed variety.

I arrived at about 7:10 and several of Bob's colleagues were still bringing things out of his house and setting them out in designated areas about the yard. Here's a shot of the yard at one point during the morning: 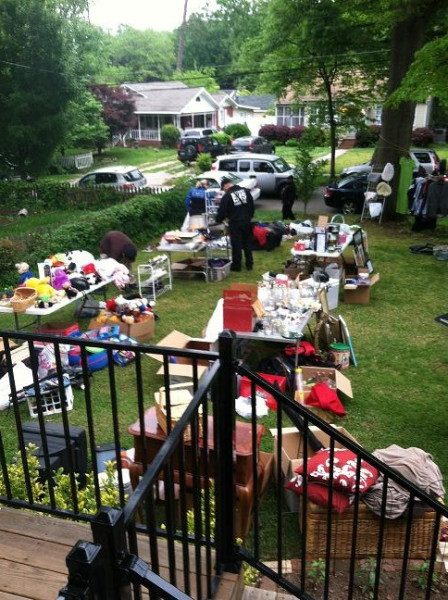 Bob really puts a tremendous amount of his energy into this event each year, most of it in preparation for the event—and especially in the week or two before the event when lots of people are dropping off donated stuff that he gets to price and store in his home until the event.

But that's not to say he's not one of, if not the, busiest person on "sale day." Here he is handling something that's come up during the day: 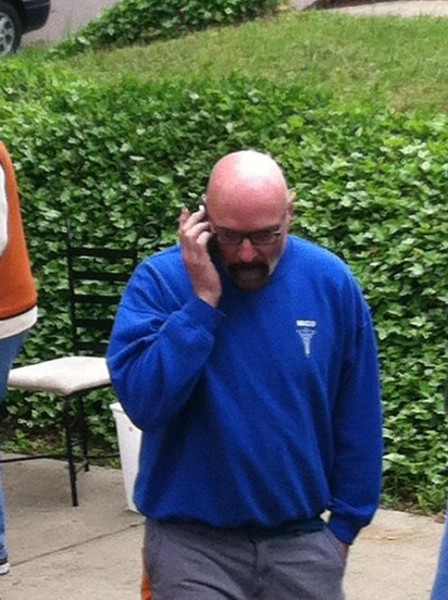 I mostly sat on the porch with Vincent and Frances, commanded the music (which amounted to putting on a playlist with 200+ songs on it), and directed people, usually to Bob or Joyce who were usually the ones working the "floor," whenever anyone asked me for the price of something, assuming that I had something to do with this sale, since I was sitting on the front porch.

I saw a lady pick up a book I had donated and when she asked me the price for it, I tried to be personable, about which I posted on Facebook later:

To a lady buying my 1000 Places to See Before You Die book, I said: "I've been to three places in this book," to which she replied, "I don't go nowhere but Topsail Beach." "Well, there's a 1000 more places you'll never go," I thought handing it to her. #PrettySureTopsailsNotInThatBook

I did help put the remaining stuff back into the garage at the end of the day and helped count the proceeds of the day, which were very good. Congratulations Bob, and the MICU!

After that, Bob, Vincent, Frances, and I had lunch at my place, to which Vincent rode with me, and Frances rode with Bob—presumably their first time traveling somewhere in separate vehicles. Bob and I enjoyed black-peppercorn-marinated turkey burgers, some deviled eggs, and a cold vegetable salad with toasted sesame soy and ginger dressing.


I got in a 30-minute nap before showering again and heading out to Twanda's graduation party, which was a large, large time. There were 50 or 60 people there, including a few of my work colleagues. And there was a ton of delicious food!

Twanda used to work with us and left last year when she got accepted into the Masters of Science in Analytics degree program, which is an accelerated Master's program that completes in one year. This party was to celebrate her completion of that and her new job working at SAS in Cary. I can't think of a more deserving person for these achievements. Twanda is quality people.

I'd brought my bottle of Blanton bourbon with me, which I received last year from a work colleague in appreciation for an edit on her dissertation, and I was happy to find that it was such a "conversation piece" and "friend maker" at the event. A lot of people had "a taste of happiness," but I drank a good portion of the bottle myself.

I had a great time there, in spite of hugely overeating (which was no one's fault but my own—well, maybe the Blanton's to some extent), which I will pay for over the next several days.


At home, I took a two-hour nap, after which I showered yet again today, and then met Joe and Bob out at Flex, where it was "Beard Bash" night. Whatever.

Still feeling the effects of being "over-served" earlier, I only had one drink there, and we left at a little before 12:30, mercifully, before the beard contest started.
Collapse