~Sunday~ I was up at 6:00, showered, packed, and was doing one last check of all the drawers to make sure I hadn't left anything in any of them.

Although I was pretty sure I hadn't put anything in the nightstand drawer, I opened it to check it anyway, and squealed when I saw this in it: 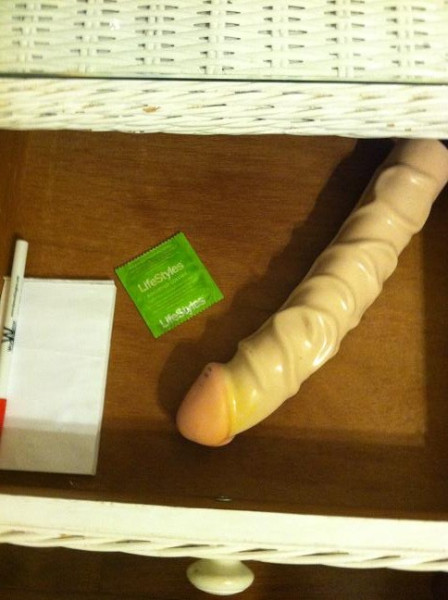 Joe met me downstairs at 7:00 and since the office didn't open until 8:00, we put our room keys in the drop box, and then hailed a cab for the airport.


When we got to the airport, Southwest had had a "system-wide outage," so things were a bit chaotic. None of the kiosks were working, so everyone had to get in the line to see a check-in agent, regardless of your situation.

After moving halfway through the line, the kiosks came back up, and Joe and I got out of line and checked in with those, which thank goodness, actually worked.

A little while after being at the gate, Joe had gotten in line to get some coffee at Dunkin' Donuts, and then the gate agent came on the loudspeakers saying, "Hello. It's Pam again," as if we were all old friends.

She then went on, in this very folksy chat to say that our flight (which was going to Raleigh-Durham via a short layover in Tampa) might be oversold and that they might need a few people to give up their seat, and that she knew several people were going to Raleigh-Durham, and that they'd be offering a $100 voucher if anyone who was, would wait for the next flight, which a little less than an hour later and a direct flight, and if anyone would be interested in that to come up to the check-in area.

I was the second one in line, as I was standing right near the check-in area. She took the guy's name in front of me, and then mine, and when I told her I was traveling with Joe, she said, "I'll just put a little 2 after your name, as I might only be able to offer one of you the voucher."

Well, after a lot of drama, Joe and I ended up being "pulled back" from halfway down the jetway to board, where I received a $188 voucher, and we both were put on that next, direct flight.


We had an uneventful flight back, with a seat between us, and Jen picked us up at Terminal 1 at a little after noon.

Back home, I found some flowers from Bob in a vase on my kitchen table, and a heart-warming card from Robert noting the passing of what would have been our 11th anniversary. My heart was full.

Joe and I met later at The Borough, where we had dinner and a few drinks.

After that, we went to Flex, where karaoke was going on, but neither one of us was into it at all, and we left after one or two drinks. I'm so glad I took tomorrow off!
Collapse