~Saturday~ I was up at around 8 or 8:15, since I sent directly to bed when we got home last night, and I was out within minutes of my head hitting the pillow. I started off the morning with the standard complimentary breakfast on the deck near and below my room, which by now has become our de facto breakfast spot.

I was behind two guys in the breakfast line, and they walked in front of me all the way to our spot and took the table we usually sit at, so I took the "high boy" next to it. At one point, I posted this Facebook comment about one of them:

The way the guy sitting on the deck next to me is phlegm-hacking, I predict he's just minutes away from lighting up a cigarette after his breakfast. #NotHusbandMaterial

Joe wasn't up yet, so I sat alone there—enjoying my breakfast and catching up on Facebook—until they eventually left, and then I moved to that table they had vacated before Joe came down.

I started drinking whisky and diet coke right at noon, as I'd bought a 1.75 liter bottle of Canadian Club that I needed to finish up before leaving tomorrow. :-) 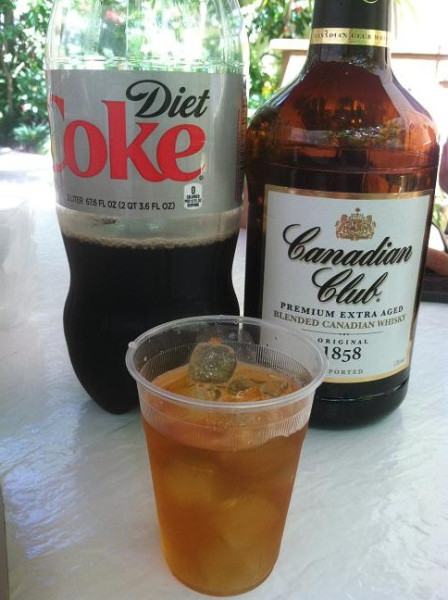 Later in the afternoon, Joe and I walked to get some lunch, and we passed this car, as we had all week, and I once again thought of 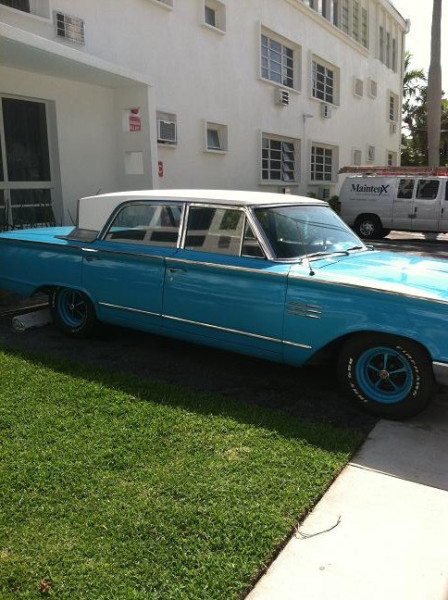 We decided to have lunch in an McSorley's Beach Pub that was near the liquor store that we went to used to, but when we got to the bar, the bartender told us that they don't serve food at all in the place.

"I would recommend you go over to The Parrot Lounge to eat. They have great food there. Don't be fooled by the Red Dog Cantina when you go by it. It looks nice, but their food is terrible. It's a big tourist trap."

To which Joe replied, "Oh, we ate there yesterday."

With only a slightly embarrassed expression, she asked, "Oh. Did you like it?"

We both indicated that what we had was pretty good. Yeah.

That drama aside, we did indeed eat at The Parrot Lounge, and I had their Angus Cheeseburger, which was outstanding.

Before heading back to the resort, we stopped by Subway and bought sandwiches to eat either before heading out to the bar tonight, or once we got back.


We waited for just a few minutes for a supposed "Party Bus" that the Worthington House had just signed up with to serve the resort, but it was the "maiden" ride, and it wasn't clear when it would arrive, so after about 10 minutes, we decided to catch a cab instead. Our destination tonight was Scandals Saloon, where it was Country Night, and they had line-dancing and two-stepping.

Shortly after arriving there, my sister Vivian checked in on Facebook in a bar in San Francisco with a picture of her bourbon drink, so I posted this one: 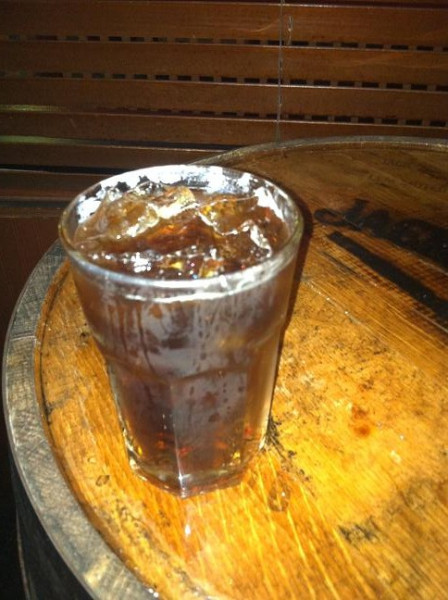 with a coast-to-coast virtual toast!

We had a fun night here. The people were friendly. I was able to do 6 or 7 line dances that they did they same way we do them in Raleigh, so that was a ton of fun. Capturing the ones I remember for posterity: Tush Push, Boot Scootin' Boogie, Reggae Cowboy, Chill Factor, Cruising, Dizzy, and the Barn Dance.

I asked a big, strapping, cowboy to two-step with me, and I got the most eloquent "no" that I've ever heard, "Oh, I'm sure there are a lot of guys here who would dance with you." He generously left off the obvious, "But I'm not one of them."

We talked to a brother (Ruben) and sister (Lucy), who were sitting at the bar, and were real nice.

We left there not too late, as we had to be up pretty early for our flight back tomorrow. I ate the hell out of my Subway sandwich when I got home.
Collapse