~Friday~  I was up at about 10:00 this morning, and had breakfast on the deck by my room, which Joe and I have dubbed as "our private Idaho."

I started drinking right at noon, and pretty much kept a buzz on for most of the afternoon, sitting by the Alcazar pool in the shade on my laptop, while Joe took in the sun poolside.

We had a late lunch / early dinner at the Red Dog Cantina, where we split a Queso and Chips appetizer, as well as a Crispy Calamari appetizer. For our entries, I had their Santa Fe Chicken Salad (hold the beans) and Joe had their Burrito Perro. 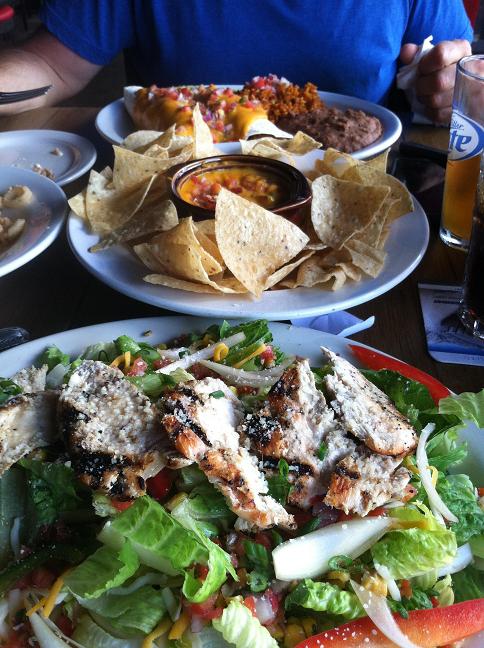 It was also Happy Hour, with buy one get one free beer and well drinks—which we, of course, took advantage of.

We stopped at a little grocery store, where I bought a bag of Doritos for drinking munches back at the resort, and an ice cream sandwich for tonight's dessert.


Once home, I took a nap, and then spent about 30 minutes in the Alcazar hot tub, before Joe and I caught a cab back out to Wilton Manors. We had a sketchy cab driver who immediately handed us a business card with his "other" business advertised on it. He also had a huge briefcase between the front seats that he kept closed, with his arm resting on it, the entire time.

Tonight was Bill's Filling Station night, and we saw John there again. We drank there until late in the night, when we crossed the street for some snacks at Alibi's this time having Potato Skins and Chicken Tenders. The sauce for the potato skins was hot—primarily due to a lot of horseradish sauce, I would say.

We caught a non-sketchy cab ride home. I went directly to bed, and was asleep, I'm sure, within five minutes of hitting the pillow.
Collapse