While waiting for Joe and Bob to arrive at 10:00, I read some of Merry Christmas, Alex Cross, starting again from the beginning. I had started it back in January, getting as far as chapter 19, but then my (Games & Learning Design) grad school class started up, and reading for leisure ceased to be a luxury.

Since it had been so long, and it's easy reading, I just started from the beginning again. Not to mention, I have nothing but time now that my class is over.


Bob drove us to the airport, complete with a playlist he had created starting off with "Where the Boys Are"—in an allusion to the all-gay, clothing optional, men's resort in Ft. Lauderdale to which we were en route. That was followed by other songs about vacation, the beach, and boys. So fun, sweet, and thoughtful.

I was not impressed with the signage at the Southwest Airline check-in area at the Raleigh-Durham Airport. Joe and I had both already checked-in online yesterday, and we weren't checking any bags, so we got out of a long check-in line and went straight to security.

There, they told us you have to have a printed boarding pass to go through security. Joe had printed his, but I only had an electronic one, so we went back to the line, which was already long when we'd gotten out of it and was significantly longer when we returned. Not pleased.

When we finally got to an agent she said, "Oh if you're not checking a bag, you could have just stepped up to that kiosk over there and printed your boarding pass instead of waiting in this line. And we were supposed to know this, how???


Once again, for about the 200th time in a row, I got through security without my liquids—one of which is more than 3 ounces—not being placed in a plastic bag and taken out of my suitcase before going through the x-ray machine. Not sure why it never gets flagged.

We boarded on time, and without incident. As "Todd" and I always do, we immediately started naming the "characters" sitting around us, so we could talk about them freely as we progressed through the flight.

I put "Todd" in quotes, because during this trip, Joe and I—in honor of this PostSecret: 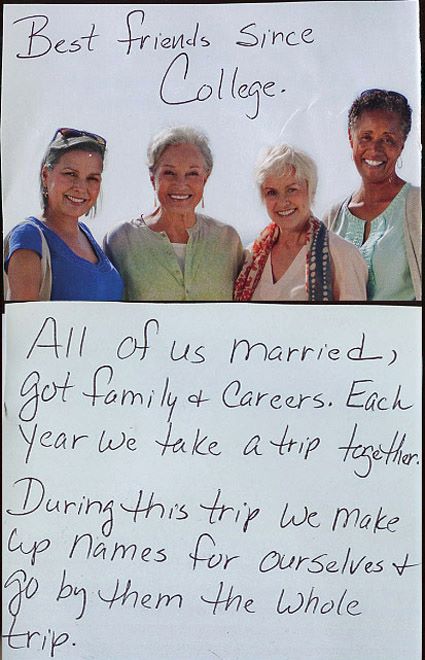 have agreed to call each other Todd and Nate during this entire trip.

Before it was time to "turn off all electronic devices," I sent a quick email to the Worthington Guest House reminding them about our arrival this afternoon, and to not mention a package I had shipped there if it was already there when we arrived.


We arrived at the Worthington at close to 2:00, where Joe and I checked in separately, because we had different rooms. "Scott," the guy checking us in—who put the sugar in gay—was very, very nice, if not the most masculine guy on the planet. Not that there's anything wrong with not being masculine.

I made eye contact with him and the other two guys in the office while Joe was filling out his paperwork, but I didn't get any sense that they knew "I was the guy" who had been sending the emails about the package.

After I completed my paperwork, Scott gave us a tour of the resort, which is actually three separate guest houses connected together by nicely landscaped walkways, and then he showed us to my room. I put my stuff in there and followed him and Joe upstairs to Joe's room to see what his looked like.

All three of them squealed in unison, "THANK GOD! We thought it was you, and none of us dared say anything!" And all of us had a good laugh about it.

I sent an email to Joe's sister, Kathy, to let her know that I had it in hand, as she was the one who had mailed it there on my behalf.


Pretty much right after getting settled in, we tried to find a liquor store (First things first!) with vague directions from the guys at the front desk, and ended up having lunch first, at Le Marche.

There was a bird caught inside the store, and not too long after we got our food and took our seat, he made a bee-line for the door when it opened and flew out. Joe and I both had their Turkey BLT Panini, which we were both very pleased with.

We eventually found a liquor store, which was staffed by a young kid, who said he was from Lebanon, TN. To which I said, "Bet you're glad to be outta there!" and to which he replied, "Not really! I loved it there." Oops. Such much for my stereotypes.

Next, we stopped in Pops Corn and Yo Mama's Ice Cream shop, because I wanted some ice cream. I didn't like their choices, but while we were in there, one of the salesclerks "up-sold" us some chocolate-laced caramel popcorn.

Back at the resort, we hung out in the pool and hot tub area for the afternoon, and later walked the two blocks back to the beach and had dinner at "The Deck" restaurant. We both had fish & chips, which we were both pleased with.


Later in the evening, we hopped a cab out to Wilton Manors, the "gayborhood" of Ft. Lauderdale, where we started at Georgie's Alibi, where it was Dirty Trivia Night. The emcee's voice was grating as f*ck, and I was glad when the trivia was over.

The questions were of this ilk:

The woman who won the title of world's strongest vagina won it for being able to do what?

We walked across the street to Bill's Filling Station, where the first thing we noticed was the smoke. We knew you could still smoke in the bars here, but since people didn't do it over at Georgie's (they went to an outside area to do it, it seemed), we didn't really think about it when we were over there.

We met a guy named John there, who was from Canada, but who also had a place in Ft. Lauderdale. He gave us the scoop on "where to be when" for our next three days there, and we noted: Alibi's tomorrow night, Bill's Filling Station Friday night, and Scandals on Saturday.

After a few drinks there, we went back to Alibi's, where we had a midnight snack of chips and salsa, chicken tenders, and some French fries.

Our cab ride back was uneventful. And about $14 without tip, which I'm capturing solely for posterity.
Collapse