~Saturday~ I am not a shopper at all, but I am a writer, and so that's what I mostly did at the flea market today.

I could probably count the times on one hand that I've been to the flea market over all 23 years that I've now lived in Raleigh. Today, it was a "perfect storm" of circumstances that took me there:

The method to my madness was to saunter up to where people were standing around, looking at, and talking about things, and then step away to make notes in my iPhone Notes app about what I'd heard. I also took a few pictures over the course of the hour-and-a-half or so that I was there.

Guy to the owner of the booth next to his, as he was returning to it after being gone a bit:

A guy said he'd be back to buy all your stuff.

An excited kid catching up with his family:

Mom! I saw this guitar, and I thought it was perfect!

Lady to the guy she was with, while they were passing me:

They have some sunglasses in that bin over there.

Once you said bin, you lost my interest.

Another kid running by:

A vendor selling sports memorabilia to a customer:

I got two corners in my house—one corner's Giants and the other corner's Jets.

A grown man to someone I didn't see about something I didn't catch:

Snooty-sounding lady, perhaps not really sympathetic to the spirit of a flea market:

Yet another kid zipping by:

Booth owner talking to a young lady holding one of his items in her hand:

You can have that for a dollar, honey.

Yeah everything I got's cheap. You don't understand. I gotta sell it. Been hauling this stuff around too long.

Vendor, indicating a customer's t-shirt, and saying to him:

By the way, what branch?

Marine Corps, here. Thank you for your service.

Daughter to mother hanging up phone:

What did he say when you told him I wanted to get it for him?

He didn't say anything.

Vendor to a customer buying a coffee cup:

And tell them not to wash it in the dishwasher!

Insurance salesman to young man he'd just sold something to:

Go to that website. You'll be excited about what you see.

Vendor to the crowd at large, pointing at a pretty woman walking by his booth:

Lady, who kept walking by without even looking back, but retorted:

He takes it hard. Everything that happens to Charles, he takes hard.

Older lady to her husband as they sit on a bench:

What about lunch? Are you hungry?

What'a you wanna do, get a hot dog?

Are they busy right now?

Vendor to someone looking at his stuff:

You were lookin' at that before, weren't you. Oh. Maybe not. That might have been somebody else.

Kid, being ignored while trying to get his mother's attention:

Lady customer responding to a vendor trying to sell her a planter:

I even have a planter at home—that I need to plant something in—that's a cow.

You've been a good girl! Gonna go get in the car? Gonna go for a ride home?

A man about one of his three dogs:

This one's name is Peggy.

I saw kids on leashes, and dogs in baby carriages.

This song was playing in one of the vendor's booths, and he was singing—incredibly off key—along with it, which I'm pretty sure wasn't drawing in any customers.

I only came close to buying one thing, and that was a book of Jane Austen's Persuasion, about which I'd recently read an article. But it was in a big, thick volume that included three of her other novels, and I didn't want all that.

However, I did like this quote at the booth: 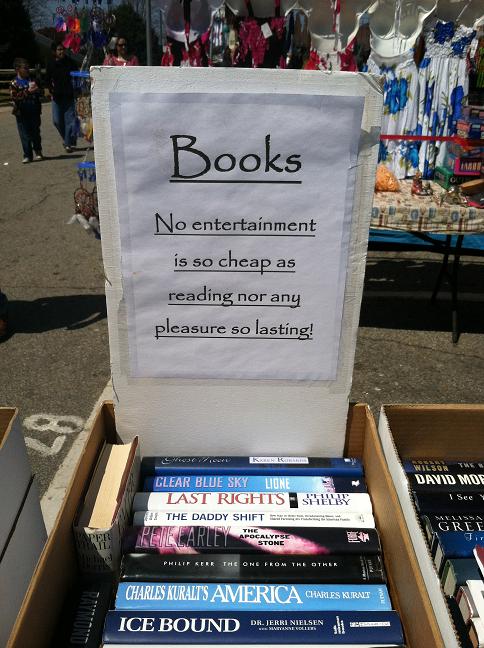 which is hard enough to parse when it's punctuated correctly. What makes people think they can just omit a comma?

I was absolutely stunned that there is evidently a market for these: 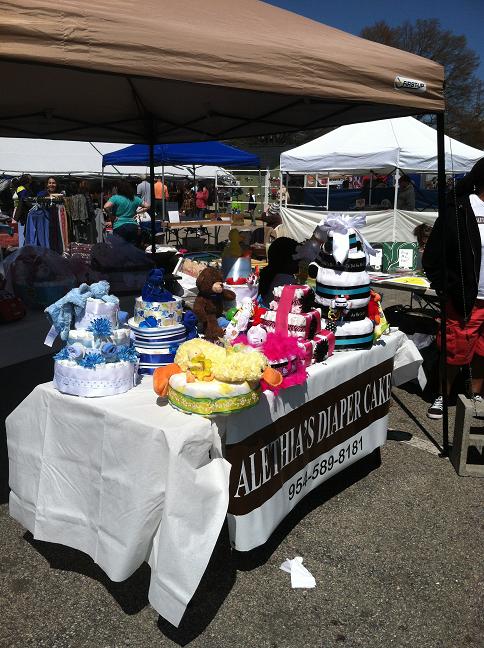 But as I stood there, somebody walked by and said:

And then a couple walked by, and the lady's response to the man's question enlightened me about their market:

They're for baby showers."

That last thing I looked at was a huge heap of junk that caught my eye for some queer reason. I only saw one thing that I really liked: 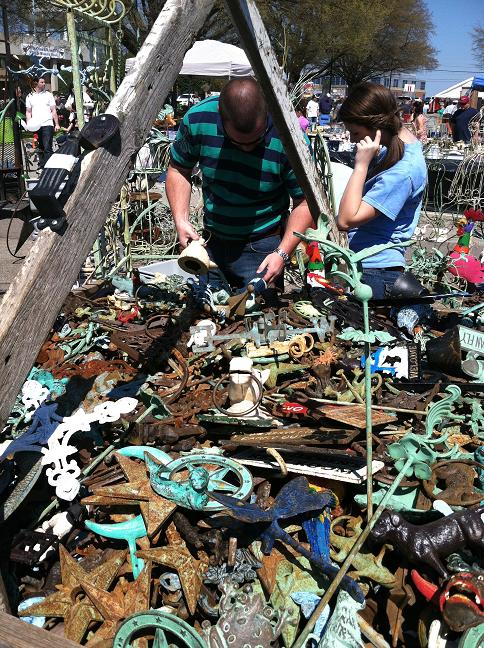