~Friday~ My friend Bob is a huge music fan with a brain like a database of the many facts about songs—such as their artists, the years they were released, who recorded various versions of them, and so on. This is also true about movies. It's rather remarkable.

Not surprisingly, I suppose, he has a massive record and CD collection, as well as movies on both VHS and DVD.

Fairly recently, he acquired an iPod Nano, with which he has discovered he can now bring to life "albums" that to this point in his life have only danced around in his head—compilations such as, "Country Boys," "Country Girls," "Country Duets (I & II)," and "Flowers," are the names of some of the ones he's created to-date.

Two of his more recent ones were songs that have places (cities, states, or regions—even one or two fictional places) either in their titles or in their lyrics. In conceiving the playlist, he imagined it as if a traveler were moving around the country experiencing these variously referenced places.

Here is a cartographical representation of each of the journeys and the songs that go with them: 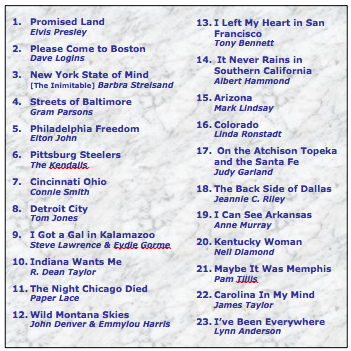 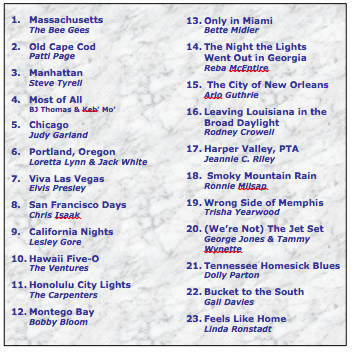 I'm lucky enough to receive copies of these playlists, which I'm enjoying immensely. Thanks, Bob, and keep creatin'!
Collapse