~Friday~ Tonight I had a real treat—figuratively and literally—enjoying Cooking with Titina, a Christmas present from my friend Jen.

Cooking lessons with Titina is a combination of meeting new people, learning new recipes, doing a little cooking, and then eating the hell out of everything at the end.

Jen and I were the first ones to arrive, and after shopping around in the fabulous little Italian store in which the lessons are held, Titina invited us to come into the kitchen and dining area. Although I'm not a wine drinker at all, I was caught up in the moment and complemented our meal with a bottle of red, which turned into two bottles of red, before the night was over.

Well into my first glass of wine, other people taking the class started trickling in and we met Sarah, Barbara, Ron, Terry, and Megan. Interestingly, although I suppose not so surprisingly with it still being fairly close to the holidays, four of us were there as a result of gifts—mine from Jen, Sarah's from her parents, Barbara's from her husband, and Megan's from Terry, her mother, who was there with her.

This was our menu for the evening, with the English version of it on the second line, and we started off with bruschetta that was out of this world, although it's not listed as part of the menu:

Sabadas
Cheese Fritters with Honey
The first thing we did was to don some aprons, which turned out to be both a blessing and a curse—well a blessing to everyone, and then a bit of a curse only to me, later. 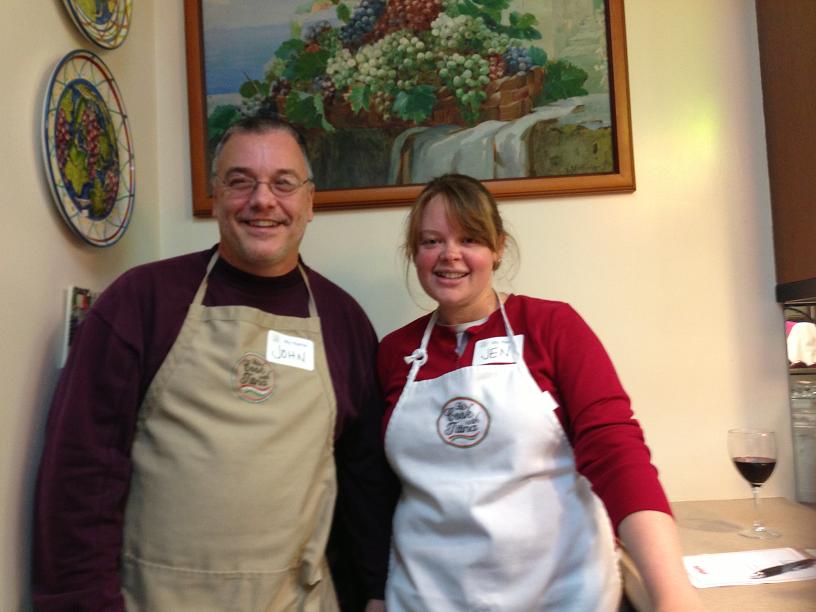 You'd never know by looking that I don't drink wine at all. 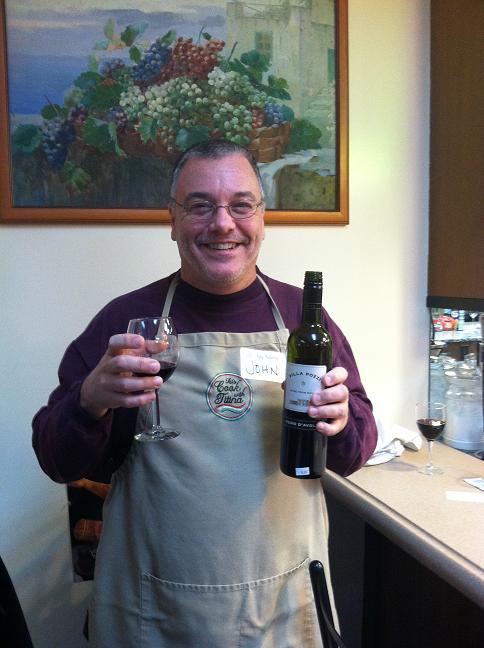 Here are the other people who joined us for the class, in order of closest to me to furthest away from me: Sarah (a blur), Barbara, Ron, Terry, and Megan. 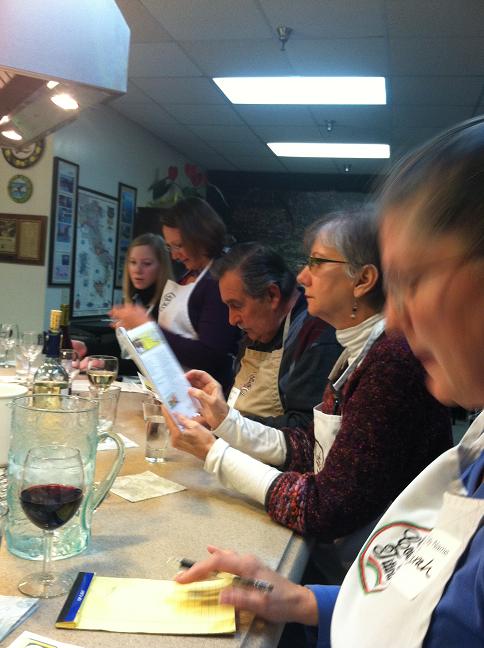 And here's the cooking area, around which we were seated. 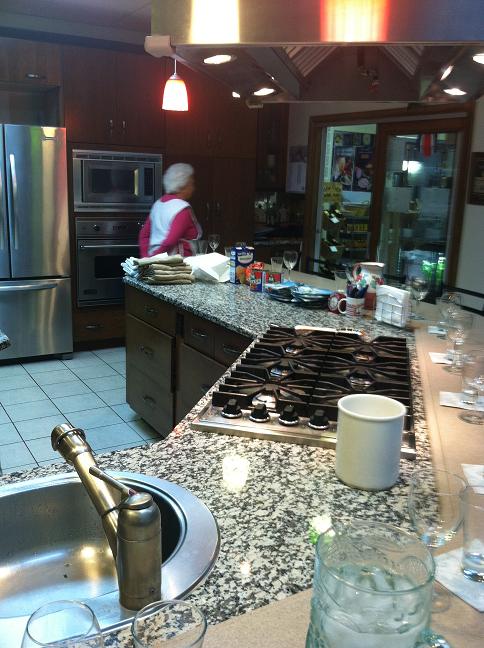 We started off with the most incredibly delicious bruschetta, especially considering that it didn't have any cheese on it at all—I always put mozzarella on mine. On the side, we had some salami and, although you can't see it because I wrapped the salami around it, two kinds of hard white cheese with it. 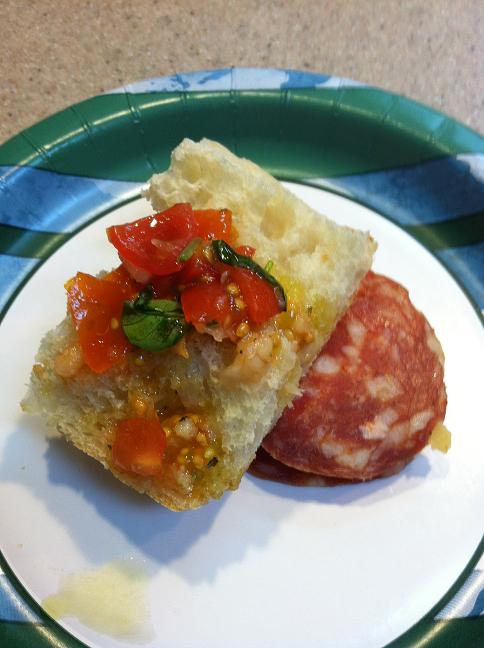 We took turns helping Titina cook the various courses, and although I'm not sure if she had picked up on my proclivity for "San Francisco sausage," Titina called on me to help with one of the main ingredients—of both a mild and spicy variety—in tonight's entree. 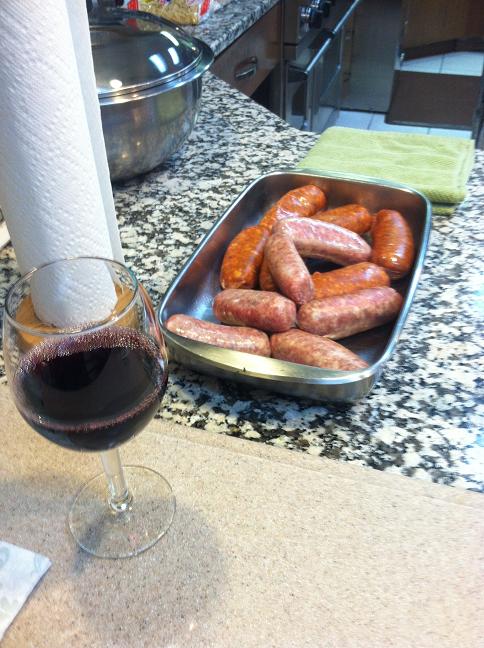 Here she is—just a little too comfortable with a pair of scissors around some sausage, in my humble opinion. 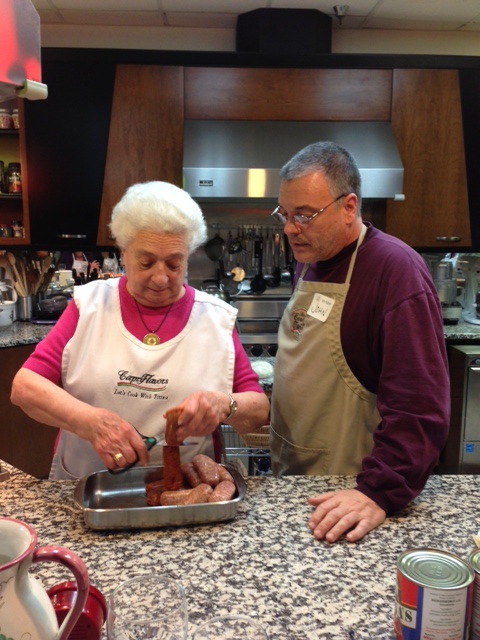 And here I am performing a bris independently, while saying to Jen the whole time, "It's taking everything in me not to say what I'm thinking," and her responding, "Good." 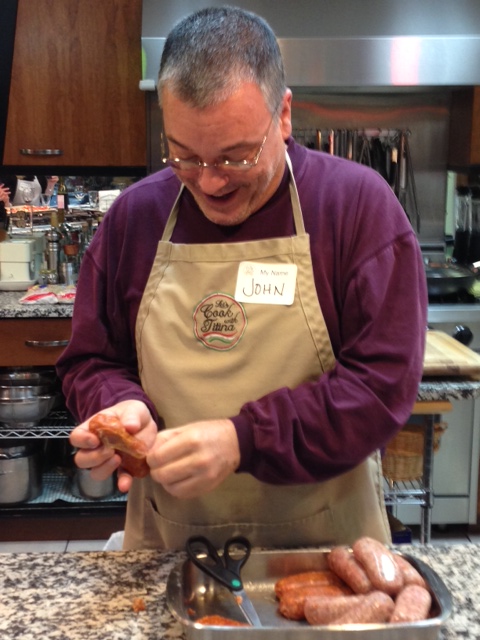 Other people helped with the other dishes of the meal, too, of course, and here's a few pictures of them doing their parts: 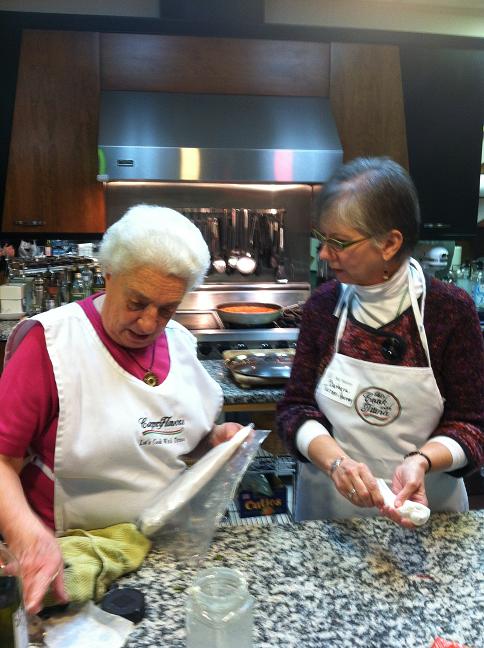 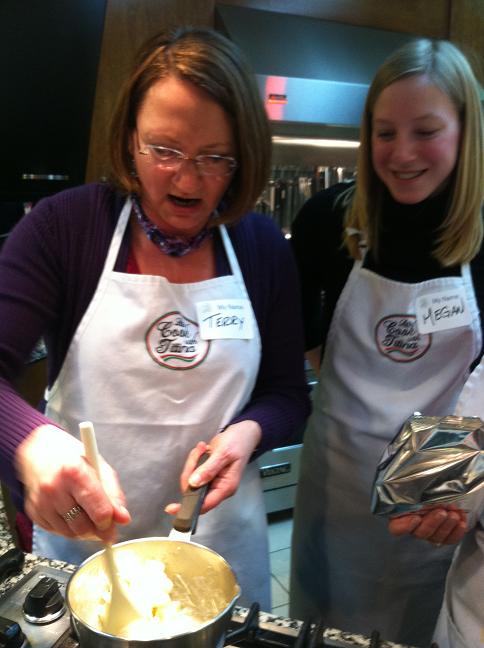 It doesn't look like I got a picture of Ron doing whatever he did to help out. He might have done his part when I left the room for a bit, to use the restroom and to buy our second bottle of wine.

In the restroom, I was "distracted" by this urinal art: 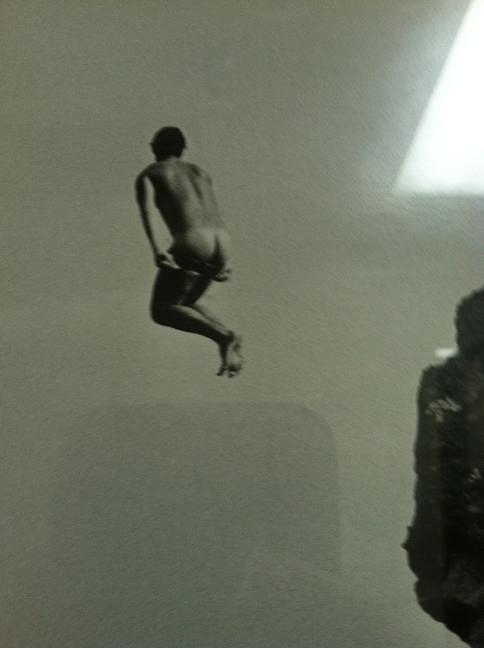 so much so that I totally forgot I had an apron hanging in front of my... when I started peeing. TMI, really.

As she should have been, Jen was horrified to find out that the wet part of my apron was not due to accidentally splashing water on it while washing my hands, although I did do that as well. No, I don't drink wine at all. Why do you ask? 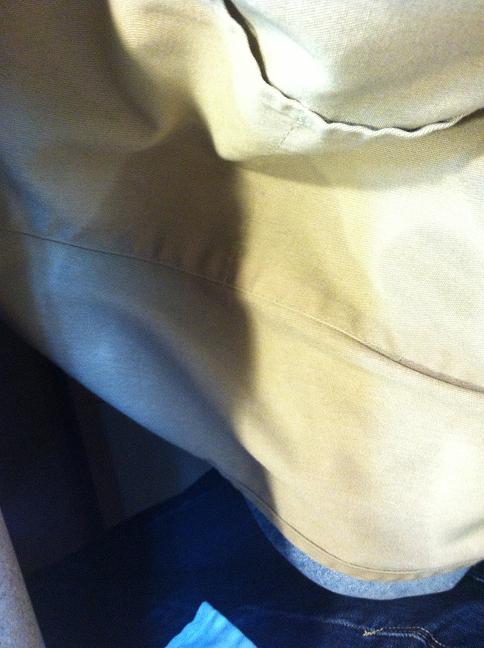 My next assignment was to drain the pasta, which I'd also had the responsibility of stirring, but had "outsourced" most of that part of the job to Bonnie, who was: 1) Titina's (presumably paid) assistant (in the background), 2) already on that side of the counter while it was cooking, and 3) wasn't drinking. 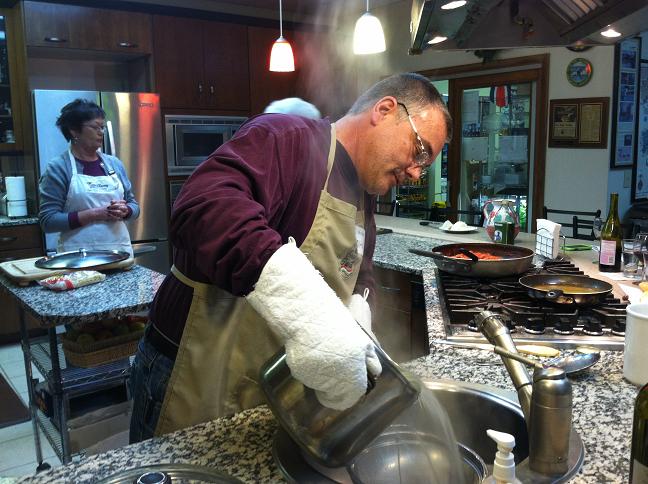 Here's Jen finishing up the last little bit of cooking before sitting down to enjoy the fruits of our labor. 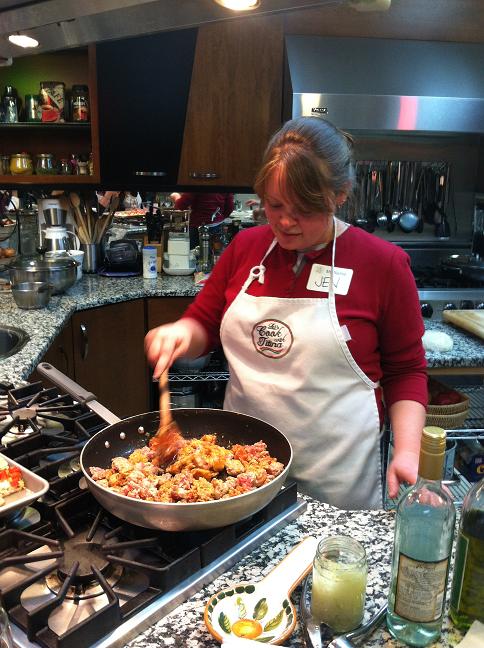 We took our seats out on the beautiful veranda—actually that's a wall mural, as in reality, it was cold, dark, rainy, and Raleigh, not Italy, outside. 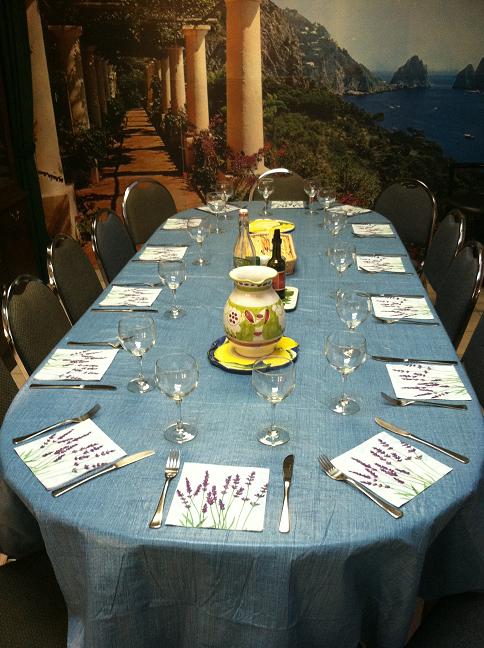 And here are the finished dishes: 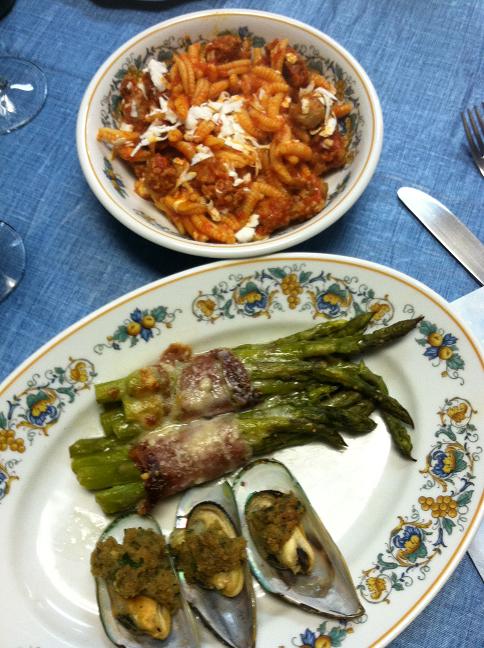 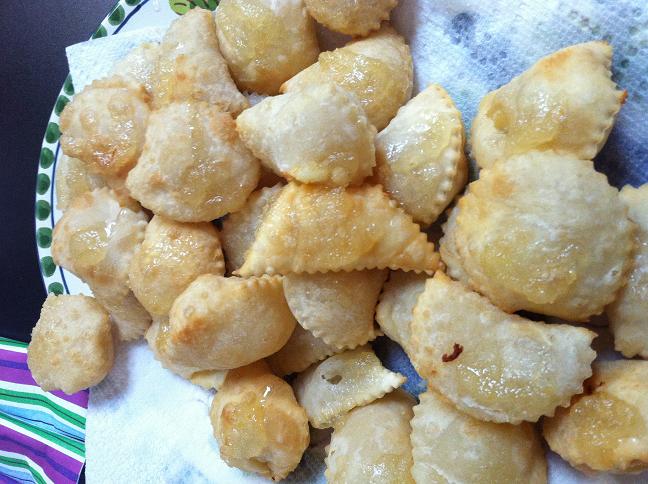 All in all, everything was absolutely delicious, the company was great, and it was just a lovely, lovely evening. I highly recommend it to anyone, and I know for a fact, that it makes a great, great gift.

Thanks, again, Jen, so so much!
Collapse