~Friday~ Last weekend, when I had dinner with my friends Jeff and Ed before seeing American Utopias with them, Jeff was telling me about a play that, as the Professor of the Practice of Theater Studies at Duke University, he is having his senior students explore for their capstone course.

The play is called Picnic, a 1953 play by William Inge, with a 1955 film adaptation starring William Holden, and Jeff is having his students explore the question as to whether the play would still "work" with a more diverse cast, including potentially, a non-white person as the protagonist. And while discussing it that night, he said, "If you've never seen the movie, it's worth renting."


I shared that with my friend, Bob, and he Netflixed it, and we watched it tonight. Thanks, Bob!

Emotions are ignited amongst the complacent townsfolk when a handsome drifter arrives in a small Kansas community on the morning of the Labor Day picnic.

It's an interesting question that Jeff poses, and I'm sort of ambivalent about it, as it brings up so many factors for consideration:


All that to think about aside, I enjoyed the movie, and I look forward to watching Bus Stop next, which during that same conversation last week, Jeff also recommended I watch.

I'll close with a pointer to some interesting trivia about Picnic, one of which is that William Holden was made to shave his chest hair for this film, in order to make him look younger than the 37 years he was at the time.

~Friday~ One of the reasons I don't want to change my cell phone plan is that I am "grandfathered in" (at least so far) with an unlimited data plan. To that end, I don't ever pay attention to how much bandwidth I'm using each month, but I have often wondered what it is.

I logged into my account yesterday to change my credit card number—since the one that my cell bill currently gets charged to each month was stolen and I have a replacement for it—and while I was in there, I saw this "Data Usage Over 6 Months" report: 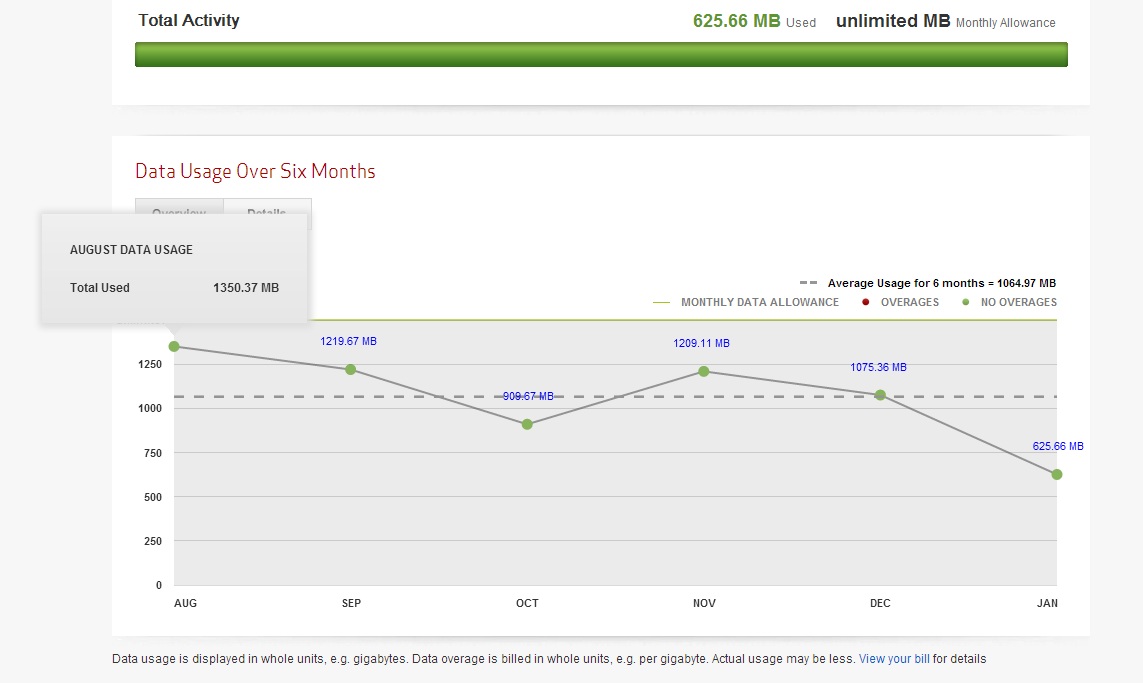 Since I would say that I have a wireless connection about 50% of the time, and when I'm connected to that my usage automatically switches to that, I'm going to estimate that my "real" usage is probably close to 2G a month.

Although, I have no intention of changing plans—and hopefully my "grandfathered in" status won't change, at least until my next renewal, which is in April of 2014—I like having an idea of my usage numbers.


On a tangential note, I have a 700-minute (that was the minimum I could get) plan for talking, of which I used 70 in the month of January, and about 15 of that was my call to my parents.

I hate talking on the phone.
Collapse