I've made deviled eggs many, many times now, and I'd already peeled, sliced, and de-yolked the eggs, and mixed up the filling last night, so I didn't really have any qualms about that goal. It was just a matter of putting the filling in my Pampered Chef Easy Accent® Decorator: 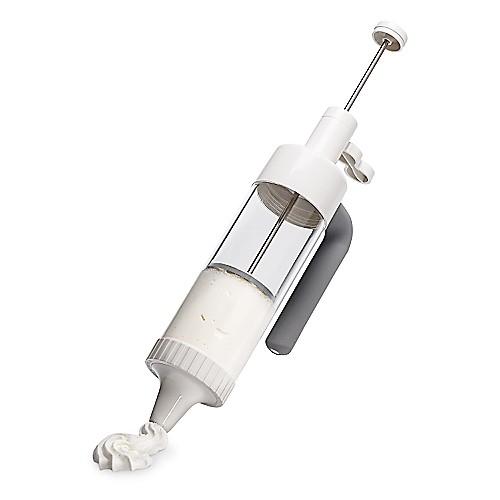 and filling the ready peeled, halved, hard-boiled eggs in waiting.

The bread was another story. I have been trying desperately for a week now to make some "chourico bread" to take to my sister's for our Thanksgiving Day meal—all to no avail, except in probably gaining five pounds in the process of "practicing."

Chourico is Portuguese sausage and my grandmother (on my Dad's side, the "Portuguese side" of my family) used to bake it into rolls that we called "chourico bread," and that's what I was trying to simulate—without all the work of actually making the dough homemade, of course. This is 2012.


So, on Sunday, I bought Take 'N' Bake bread, thinking I might be able to open it up a little and get the chourico in there somehow. Well, I ended up making a slice in it, and when the roll cooked it opened up and the chourico was just sitting in there, not at all "integrated" into the bread. Not what I was after. So I ate the rest of the rolls over the course of the day and the beginning of the next day.

Next, on Monday, I tried some Grand biscuits, and these worked pretty well, as I was able to open up the dough a little, stuff the chourico in there, and then mold the edges closed again so that the chourico would bake inside them. This was progress, but the "chourico bread" my grandmother used to make were not biscuits, they were rolls. So I ate the rest of the biscuits over the course of the day and the beginning of the next day.

On Tuesday, I bought some frozen yeast rolls that looked promising. After letting them thaw, I unfortunately found that the dough was more like the take 'n' bake dough than like the biscuit dough, in that I would have to slice them like I did the take 'n' bake dough, and I'd already learned that that wouldn't give me the desired effect. So, on these, I just mashed my thumb into the middle of the dough, making a dent, put the chourico in the indentation and then tried to close them back up. That closing back up part didn't work so well, so these turned out to be a little better than the take 'n' bake, but not as good as the biscuits. So I ate the rest of the yeast rolls over the course of the day and the beginning of the next day.

Enter Wednesday. My friend Bob knew I was looking for some dough to be able to manipulate before cooking and he told me about a product he'd seen while out shopping, which sounded perfect, so during my lunch hour, I walked over to the Cameron Village Harris Teeter, and I bought:

This seemed like the perfect solution, in 3 easy steps. A 2012 dream.


That brings me back to this morning, and making three loaves of this bread—two of the Country White, to which I was adding the ground up chourico, and one Stoneground Wheat that I was making the way it was. I started with one of the "Country Whites."

The first easy step was to mix the packet of yeast and the packet of sugar with "very warm" water (which was noted as between 105°F to 115°F, , which was admirable, but I had no device to measure it) "until the yeast is activated." It included a nice note that, "Yeast is activated when it starts to foam," which was supposed to happen within 3 minutes.

At 3 minutes, I was looking into the mixture asking, "Is that foam?" Wait. "Is that foam?" At about 3.5 minutes I decided that the cloudiness that the mixture had turned was foam, and moved on with the recipe, eventually setting it aside for 25 minutes to rise. "It'll rise, but it won't double in size," the instructions noted.

I repeated this process with the next Country White, but this time, concerned that maybe my tap water—even all the way on hot—wasn't warm enough, I heated some water on the stove first, and used that instead. After about a minute, these little things popped up in the yeast/sugar/water mixture, and I thought both "Uh-oh," and "So that's what they mean by 'foam.'" Uh-oh, because that meant the yeast in the first one hadn't been activated.

The same thing happened with the third one, the Stoneground Wheat mix, except that those little pop-ups only happened in the middle of the mixture, not all throughout like the previous one had.

Needless to say I was stressed out at this point. And the clock was ticking, with this 25-minute to let rise and then 25 minutes to cook, or maybe a little longer as the instructions noted, "You may have to cook a little longer for 'mix-ins,'" which chourico was definitely considered.

So a recap: It appeared that loaf one's yeast hadn't activated, loaf two's activation seemed the most thorough, and loaf three's activation was partial.

Imagine how non-plussed I was then when I removed the covering—after the 25-minute period for the dough to rise—to see that the only one that had risen was loaf one—the one whose yeast I thought hadn't activated at all! Huh???

And that's how they ended up cooking, as well. The first loaf came out the best, but it was far from "perfect," being a little on the dense side, not light and fluffy. The other two loaves were thick, one-inch high, slabs of dense dough.

While that last loaf was cooling, I ran to the grocery store near my house and picked up two packages of: 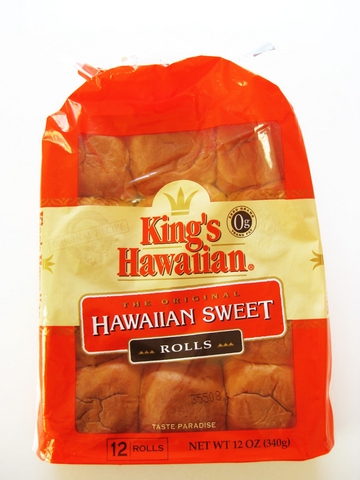 
Robert and Joe arrived at 8:30, and shortly after that, we were off to Greenville.

Nearing Greenville, I checked in with Vivian, and she told me that mom and dad had gotten out to their car in their driveway in Jacksonville to find one of their tires flat, and that my niece and her husband were on their way there from Richlands to help them out. It turned out to only be a bent valve stem, and once straightened out and filling the tire backup, they were on their way. Thanks to Meagan and Chris for their help, once again!

We did what we do best and drank while we waited for them to arrive in Greenville. In addition to the seven of us (Me, Robert, Joe, Vivian, Jeff, Mom, and Dad), Jeff's sister JoAnn was there with her husband, Larry, and a friend of Vivian and Jeff's, Richard, also joined us.


Once mom and dad arrived, we had a most delicious meal, with the table settings, the house decorations, and the food all being just so. Vivian really is amazing. I am so thankful for her.

I'm glad about these pictures I took, but I wish we'd taken some of the people! As always, Vivian had a decorating "theme" going, which she does every year for both Thanksgiving and Christmas. This year's decorations looked like this: 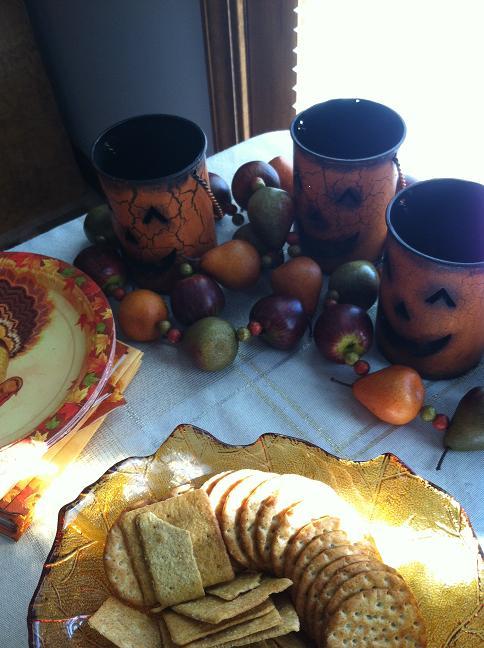 The goodies on this table included crackers and dip, toasted pecans, cheese straws (both regular and Asiago flavors), and some M&Ms. 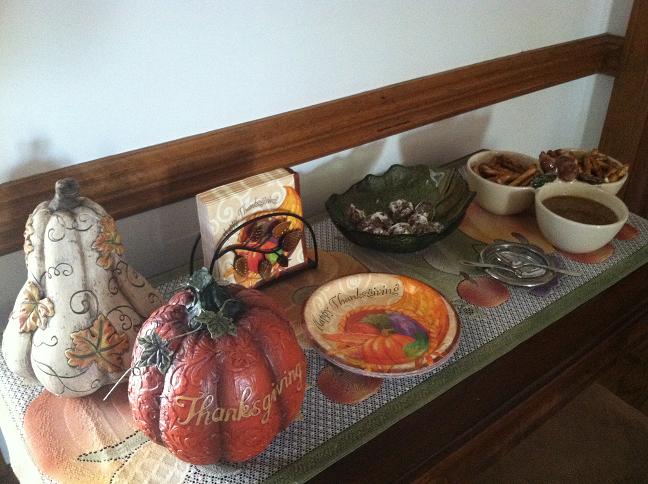 This table had pretzels to dip in the most delicious Rothschild Honey Mustard Pretzel Dip, and some rum balls—which were jam-packed with rum. 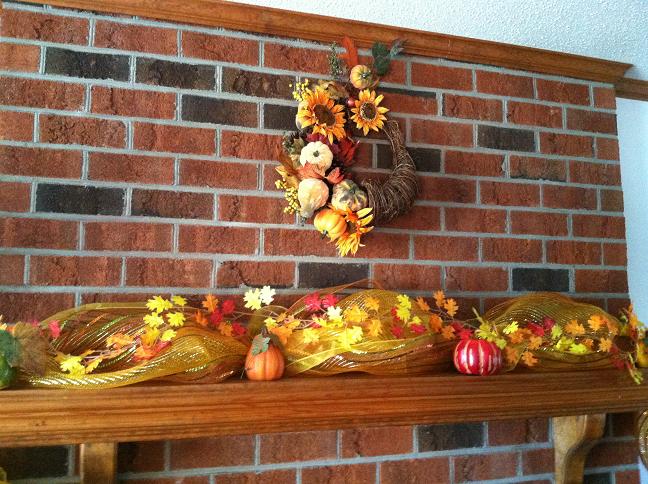 Evidently, mesh is "all the rage" this year! 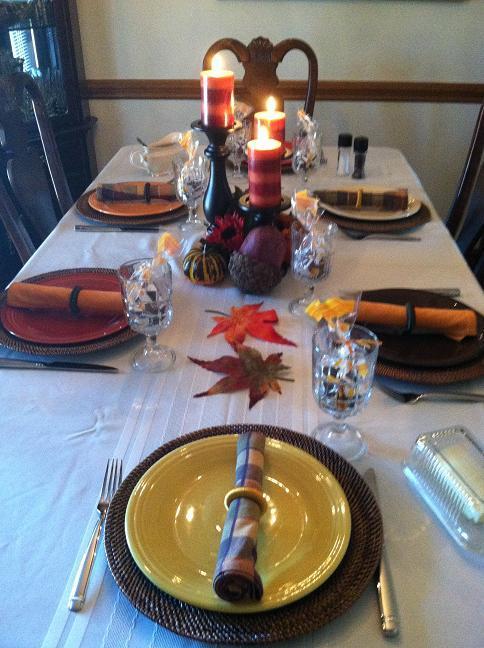 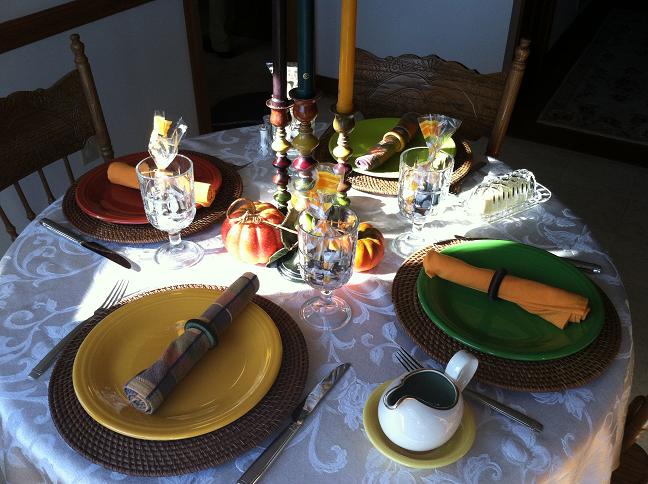 The Chef Carving the Bird 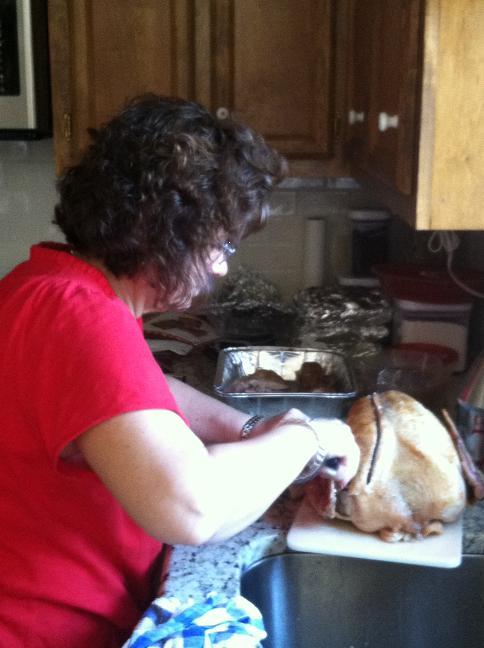 She cares, she cooks, she carves! [In a complete digression: It just now occurs to me that word "cares" and the word "carves" are only separated by one little letter. ♫ You better run, you better take cover. ♫]


After dinner, Robert, Joe, and I took a half-hour walk around the circle on which Vivian and Jeff's house sits, and when we returned mom and dad (mostly dad) was ready to go. And shortly after getting them on the road, we departed ourselves.

Back in Raleigh, I napped for a couple hours, and then read a good portion of Hello, Gorgeous, with the intention of going to Trailer Park Prize Night for the 12:30 show, but that didn't happen.

I ended up turning lights out at 11:30, in anticipation of having an early and full day tomorrow. Happy Thanksgiving to one and all.
Collapse