~Friday~  I was up at around 8:30 and set out for a "day in the city," leaving my gracious hosts to work from home.

I stopped at the close by Tal Bagels, where I had an egg and cheese bagel and some coffee for breakfast. Here are a couple of Facebook status updates I made while there:

I walked down about four more streets, where I picked up the Downtown #1 Subway to 42nd Street. I made a Facebook status update during the ride:

Exiting at 42nd Street, I walked a couple of blocks to 5th avenue and toward the New York Public Library, during which I heard this exchange:

Actually, I only heard the solicitor ask the question, and I just imagined, that if anyone would ever respond like that, it would be a New Yorker. Every once in a while I use a little poetic license in story-telling.

I entered the New York Public Library, which I've been in before, and which is absolutely beautiful, not to mention huge. 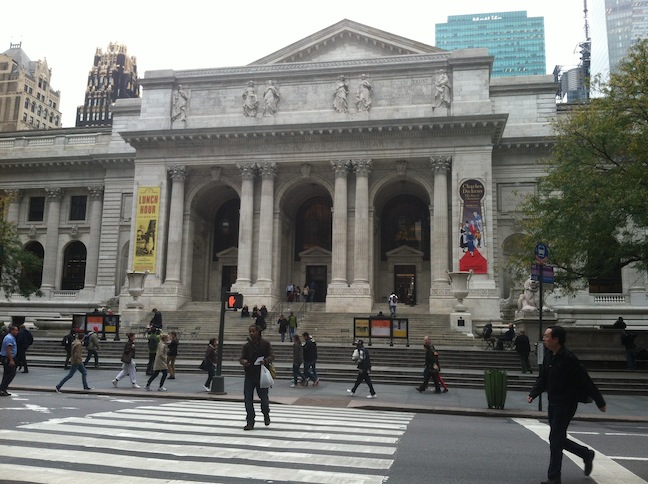 I sat in the quiet section and noted this about the young lady sitting on the other side of the table from me:

After being there for three or so hours, I packed up and took a break, going to Devon & Blakely, a little coffee/pastry/sandwich shop right across the street from the library, where I had their Orea & White Chocolate Cookie Bar: 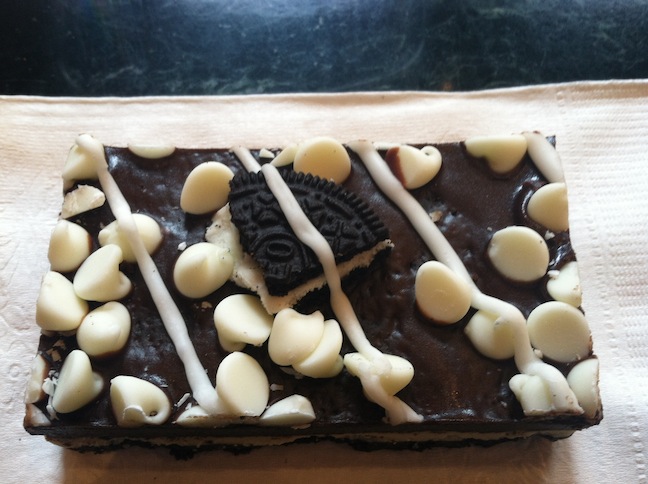 I went back into the library and the quiet area, this time taking a seat in the very back of the room at the very end of the table. After about an hour, a girl sitting across from me and to the left, whispered, "Excuse me. Would you please stop humming?"

I was horrified and apologized profusely, as I was totally unaware I was doing it, and I said as much.

Undoubtedly, I had been humming Barbra songs.


My original plans for the day included heading back up to Paul and Juan's before going to the theater, but I was at 42nd Street, and the play was at the Laura Pels Theater was at 46th, so it hardly seemed worth taking the subway all the way back up to 99th and then back down again, just to change my shirt. So I didn't.

I made my way over to the theater even though it was still about an hour-and-a-half until the show started. To my surprise, the box office was already open when I arrived, so I got my tickets from Will Call and then went and grabbed a bite to eat. 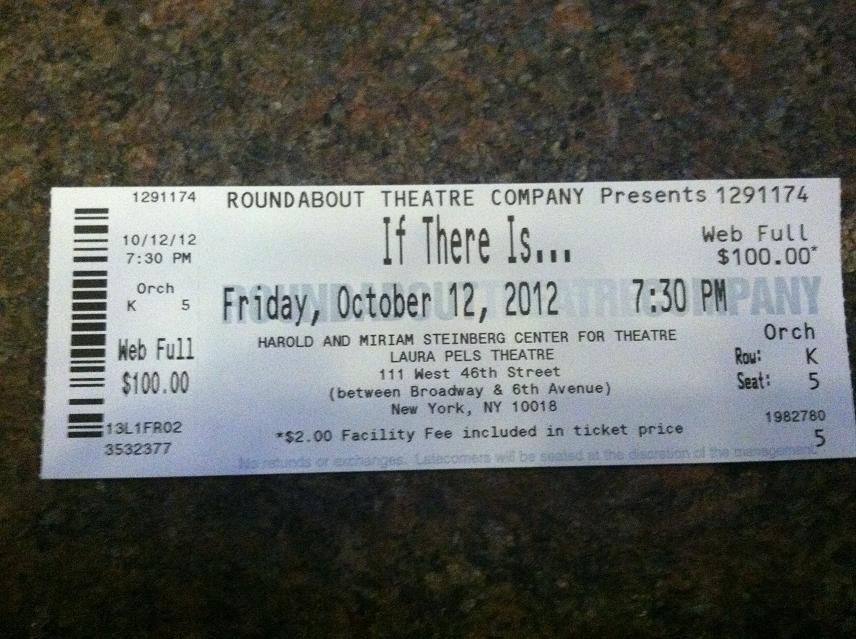 I was committed to not eating at any chains while I was in New York this time, so I had a sandwich at nearby Smilers Deli on 5th Avenue, before returning to the theater at around 7:00 for the 7:30 show.

I saw If There Is I Haven't Found It Yet, solely because Jake Gyllenhaal was starring in it.

To avoid any spoilers, I'll just say this, "If you have to pee when you get there, go before this show starts. It's about an hour-and-a-half with no intermission, and water plays a big part in this play."

The direction of this play was "pushing the envelope," to the point that some critics called it distracting. Personally, I thought it "worked." With that said, my eyes were on Jake whenever he was on stage.


After the play, since it was still fairly early, especially for a Friday night, I took a "'tween" (the day between National Coming Out Day (Thursday) and the day I see one of the biggest gay icons alive (Saturday)) pilgrimage down to the Village, with a stop in Christopher Park, before going on to The Stonewall Inn.

If you don't know the significance of The Stonewall Inn, you should take a second to scan that Wikipedia article, especially if you're gay. 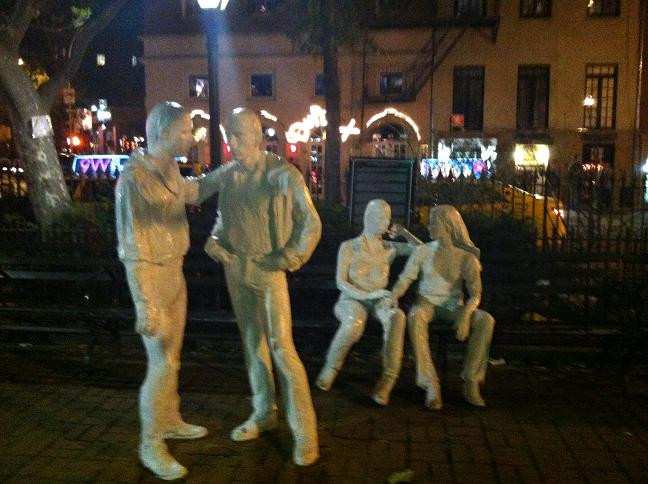 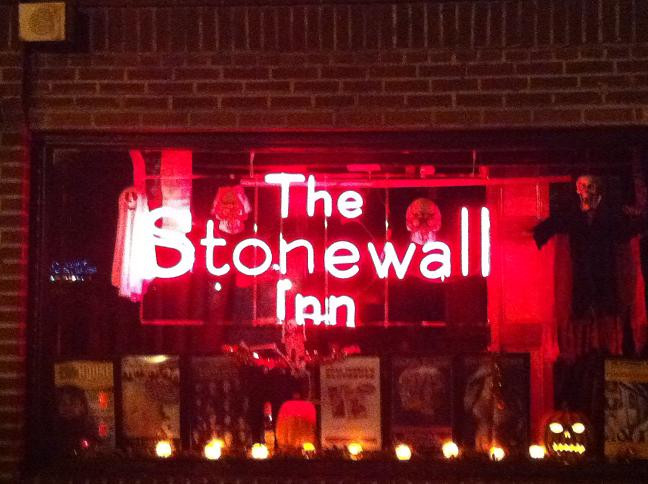 The Stonewall Inn was hopping with folks, with a Drag Queen, who reminded me a bit of Joan Rivers (and probably close to Joan's age), performing for a bit before calling up this accordion-playing macho man: 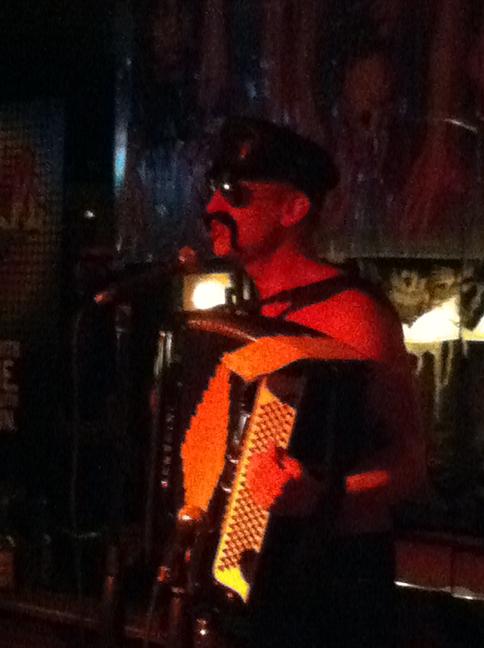 I caught the Uptown 1 (subway) Train back up to Broadway and 99th, and it was jam-packed in spite of being close to 11:30. Of course it was a Friday night. And of course, it was New York Fucking City.

My hosts, Paul and Juan, were still up and the three of us watched an episode of 30 Rock before going to bed.
Collapse