~Tuesday~ I was up at about 8:30, and Jen was up shortly after that. I prepared my bagel, which was now a day old and rather hard, and when I pressed down on it with one of Casey's very sharp knives, I sliced into my thumb.

After posting about it on Facebook, someone commented, "If there are no pictures, it didn't happen," so I naturally addressed said comment: 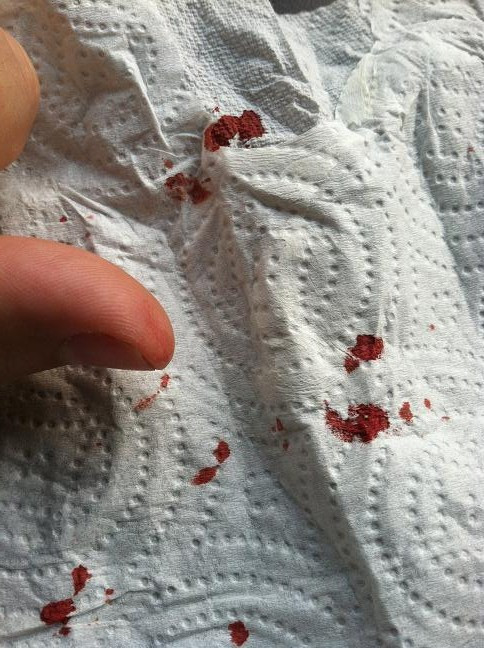 At about 10:00, we walked to Pioneer Square to take the Seattle Underground Tour, and on the way we passed a store with this sign hanging above it: 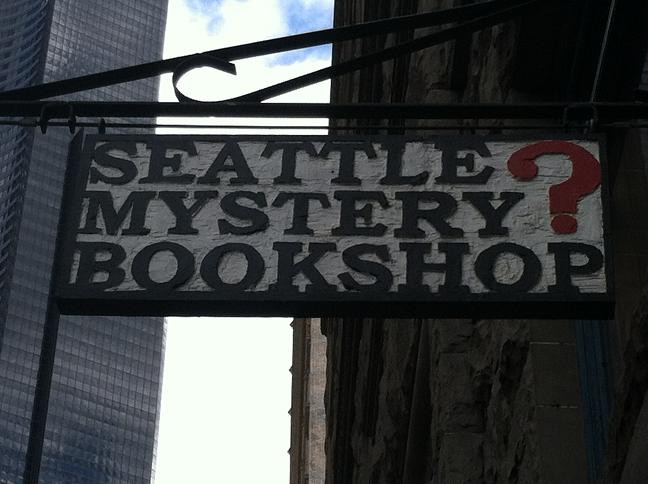 Since we were in absolutely no rush, and mystery is one of Jen's favorite genres, we stopped in for a bit. They had some cool, old books in there, including some first editions that were locked up: 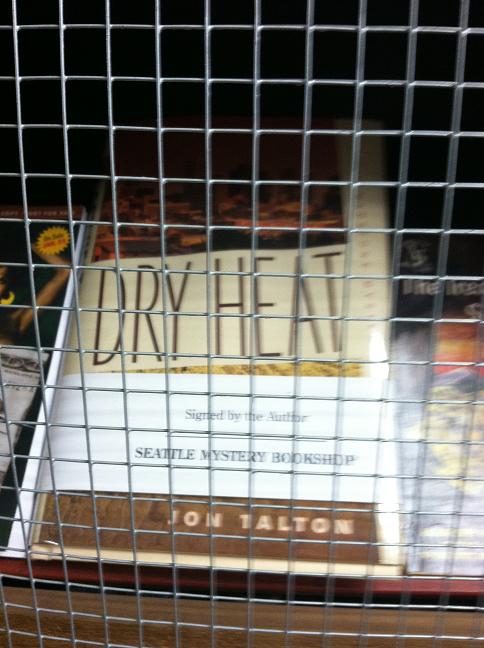 While looking around in there, one of the workers said to me, "Let me know if you have a question that I can answer for you."

She was still laughing when she said, "That's a good one."

Jen saw a signed edition of one of Dick Francis' books that was going for $5000. 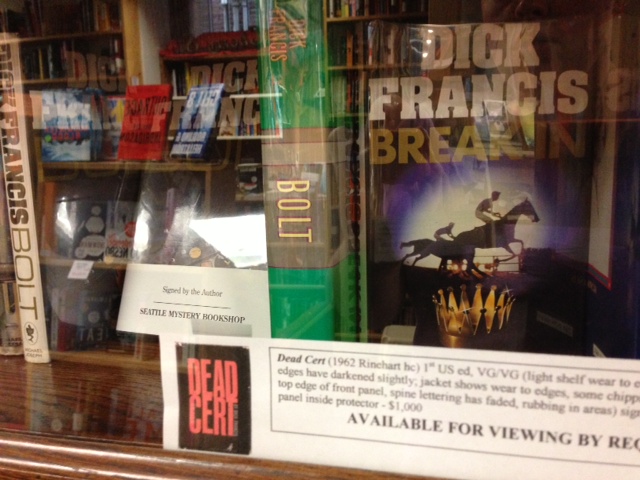 We looked around in there for about ten minutes or so, and Jen bought a book before leaving—it was neither a first edition nor a signed edition (Discuss!)—and we were back on our way to Pioneer Square for The Underground Tour.

We arrived at the square just missing the 11:00 tour, which was not an issue, as—again—we were in no rush, just enjoying a leisurely day.

We stepped across the square and into Magic Mouse Toys walking through that to see the various and sundry things for sale there.

Next in our quest to kill an hour before the 75-minute long tour, we had a quick snack at the nearby Taco Del Mar, after which we headed back to the tour headquarters.

It was a little on the cool side, and Jen left for a few minutes in search of a scarf, and as soon as she returned we went in, as they'd started letting people in for the noon tour.

I thoroughly enjoyed this tour. It started off with one of the two tour guides giving us a little background of how the underground came to be, while we sat in the restored:

I had no inkling of this part of Seattle's history, which you can learn more about in the Seattle Underground Wikipedia entry.

From the Seattle Underground Wikipedia Entry 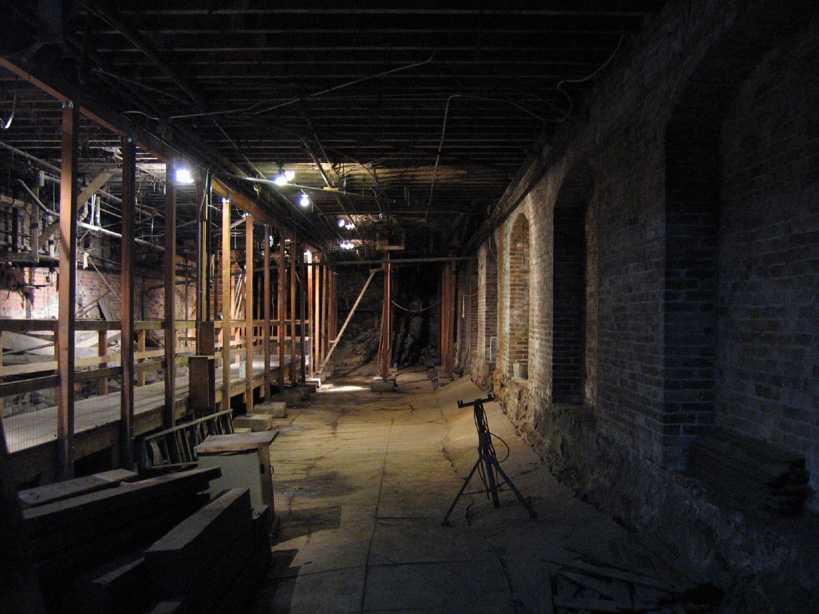 There were two tour guys, Jerry and Amy, and Jerry was just adorable and did the introduction to the tour in which we sat in benches in Doc Maynard's Public House—as seen in the picture above, although that's not us.

Then, for the actual walking down under the city, we broke into two groups, and Jen and I get in Amy's group. At first I was disappointed, but I ended up liking Amy.

She had somewhat of a dry sense of humor (which I like) and was a little quirky about some things, but overall, I thought she told a good story and she made me laugh.

There was an entire story using seamstresses as a metaphor for prostitutes that went right over my head, but fortunately was exposed when I said to Jen, "I wonder if there wasn't some hanky-panky going on with those seamstresses."

It all came together (so-to-speak) after that.

An Old Tiled Sign in the Underground
Photo by: Jen Riehle 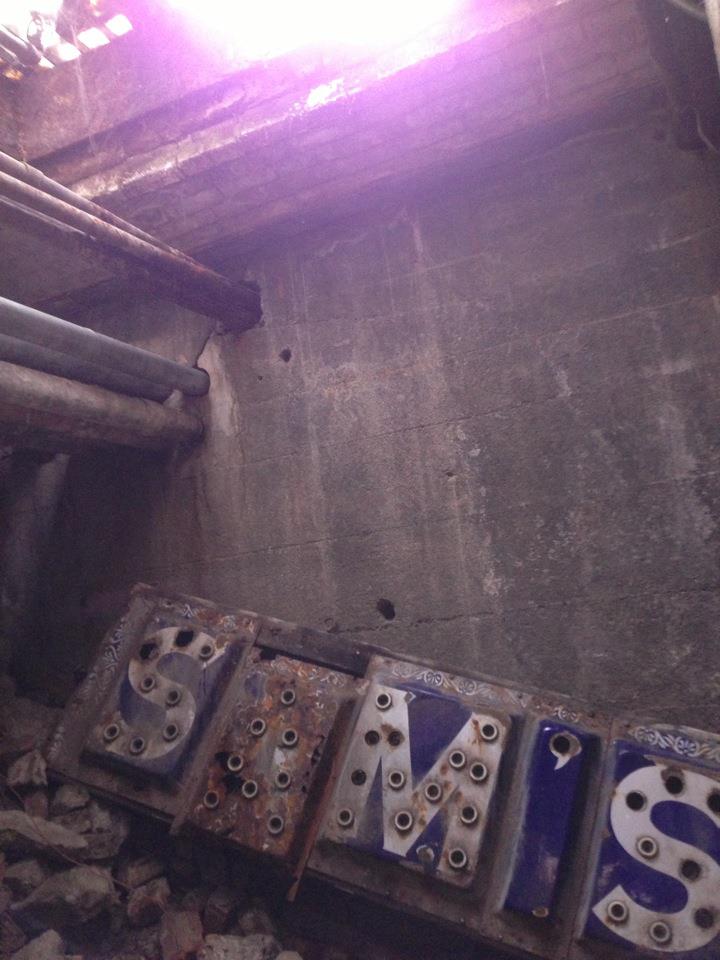 After the tour, we did a quick walk through the Pike Public Market:

The Entrance Arc to the Public Market 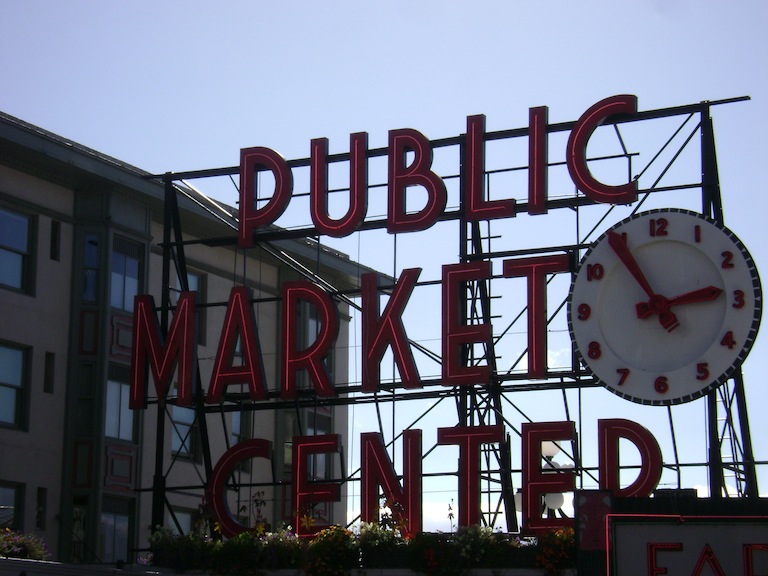 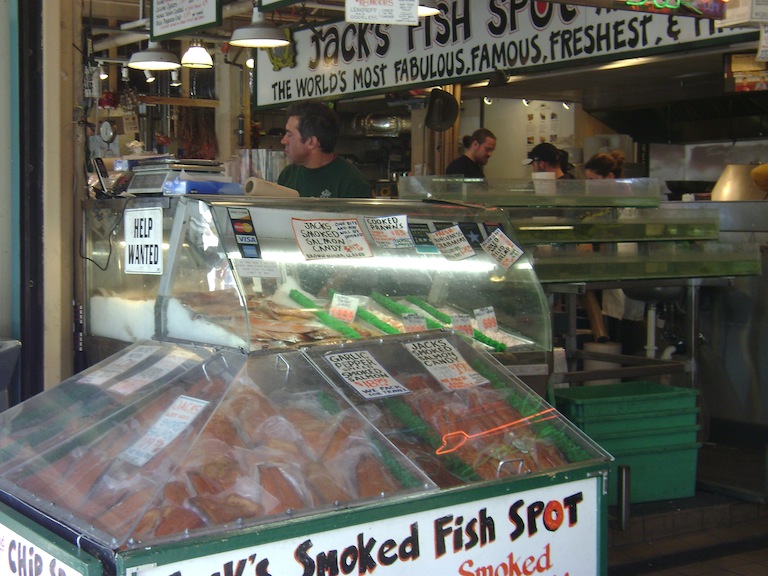 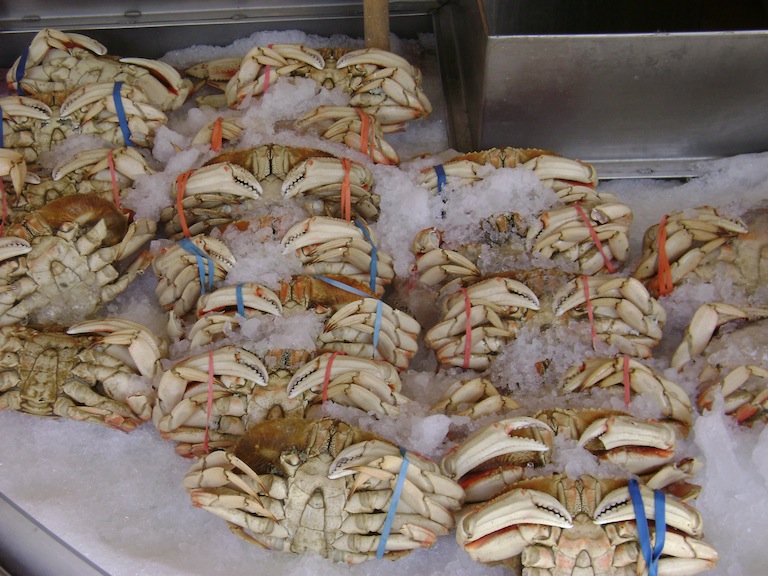 And then we stopped for a light lunch at The Pike Brewing Company, and some liquid refreshment, of course.

We tried a "local cheese" tray, which in retrospect I should have known was not going to be the innocuous variety of Cheddar, Swiss, and maybe Havarti that I had envisioned, but instead a variety of five stinky cheeses—only one of which I really liked, and that had to be couched in a mouthful of my salad to cut the pungency.

Along with that, however, we had an order of their killer Garlic Lover's Artisan Cheese Bread, and the salad that I mentioned served as a vehicle to disguise the cheese. The bourbon and Diet Coke was delicious.


After lunch, we made our way back to Casey's, stopping to drop a couple of Jen's postcards in a mailbox we passed, and once back packed up our stuff to head over to the conference hotel to check in.

I deflated the deluxe, full bed-sized mattress I'd been sleeping on in the middle of Casey's living room, and I moved his two chairs and couch back to their original indentations in the carpet.

We walked over to the Monorail, which was at the base of the nearby Space Needle, and we caught it downtown to our hotel, The Red Lion, which was just a short couple of blocks from where we disembarked.

My room was ready, so I went right up to and got settled in. Jen had to wait about 20 minutes for her room, but they gave her a coupon for a free beer on the Garden Terrace, so she did that while she waited.


Sarah iMsged us upon her arrival at about 7, and kept us updated during her progress on the light rail into downtown from the airport. She sent a couple of iMsgs from the train to me that were an absolute scream:

Once she checked in, the three of us walked over to Pike Market to have some seafood for dinner, but several of the places down there were closed, and after checking the menu on the one we saw open, we decided to go to back the The Pike Brewing Company, where Jen and I had had lunch.

We split an order of that bread we'd had for lunch, sharing it with Sarah this time, and I got a bowl of their "Pike's Famous Dungeness Clam Chowder" and a turkey sandwich, which was delicious.

We had the hottest waiter ever, and when we left, I wrote, "You're beautiful" on the back of my signed credit card sheet.

We were all pretty beat when we got back to the hotel, so all went to our own rooms and presumably to bed. I know I did.
Collapse