August's Challenge Entry | All Challenge Entries | October's Challenge Entry
Well, I've done it yet again. I've squandered away another month walking for at least 30 minutes a day. And even though New Balance winces whenever they hear me say it, I used a pair of their shoes only to walk between one and three miles a day.

It's the end of September, which means I have three-quarters of the year behind me in this ambitious Walk Challenge 2012 that I ventured on back on the second day of the year. Although it still bothers me that I had to miss some days in May, it's still all pretty remarkable, and it's an achievement I'll look back on with pride.

Here are the walking numbers for September (click to enlarge): 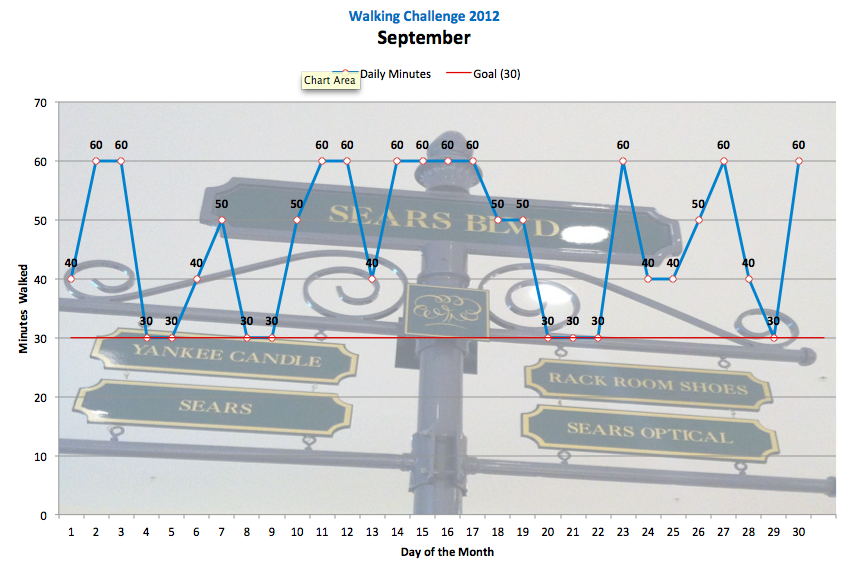 Background photo: Early this month, it was late in the day, I hadn't gotten in my walking yet, the gym was closed, and it was raining outside. So, in order to get that day's commitment in, I decided to walk around Crabtree Valley Mall. This is a shot of some signs that are posted in the mall at the major intersections.

It seems rather ironic, or perhaps just coincidental, that I'm devising this section while eating. It certainly isn't as ironic as rain on your wedding day.

I'm on a flight between Chicago and Seattle, and I've just purchased my first plane meal ever. My layover was too short to allow time to buy food in the airport, and I'm not going to make another four hours without eating. Even though I know that as soon as I arrive in Seattle, I will be diving into my host and friend, Casey's, banana bread!

For the record, I got a Bloody Mary and the "Fruit and Cheese Plate: Cheddar, Swiss and Muenster, along with gourmet crackers, red and green grape clusters, almonds, walnuts and cranberries." And for the detailed record, there was one cranberry in it and no walnuts.

Here's the September chart for calorie intake and calories burned. 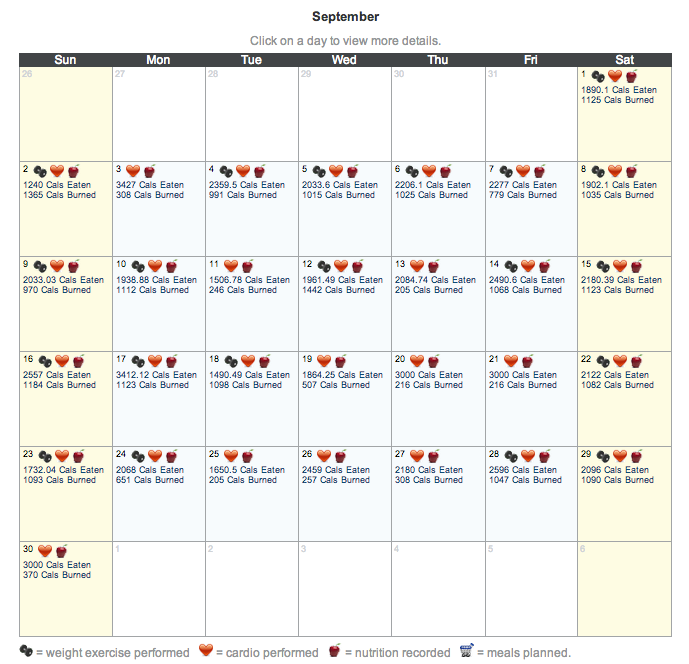 The calories burned include those from both my daily walks, and for other exercise I do at the gym, 5-7 days a week, including: 3 stretching exercises, 300 ab crunches (with weights added to the bench), and then either an upper body or a lower body workout.

Well, I had high hopes of loosing some more weight this month, but that didn't happen. The good news is that I didn't gain any either.

Here are the official September weigh-in numbers (click to enlarge): 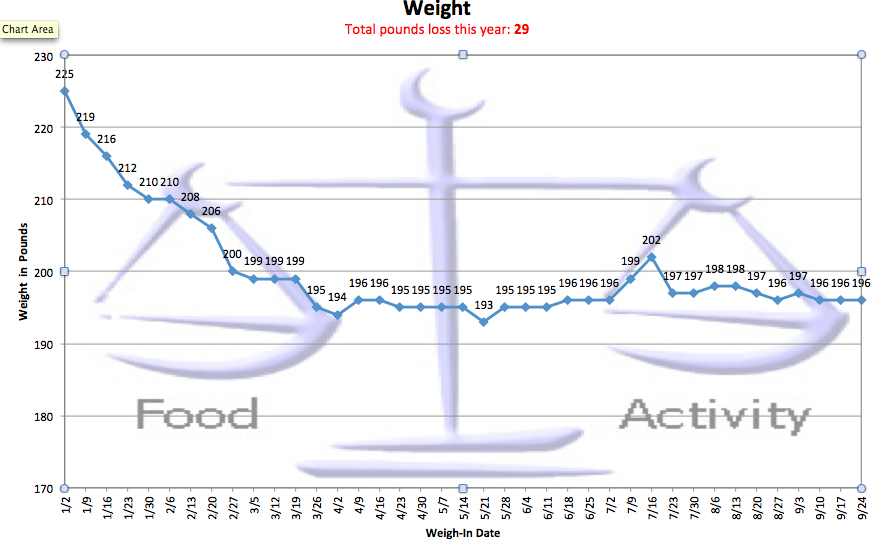 Background photo: A scale intimating some sense of balance between my eating and my activity.

Looking forward to the last quarter of the year, it's going to be an eating challenge.

Going through security, there was a soldier in front of me and the TSA guy said, "Thank you for your service," which is something I always try to say to a soldier traveling in uniform, too. Or in uniform anywhere, for that matter. That comes from my dad's 30-year service in the United States Marine Corps, and for both my own cowardice and thankfulness that I never had to serve.

That same TSA guy said to me after checking my ID: "You have a birthday coming up! Happy Birthday." It's a shame that it was a surprise to get a TSA guy who was personable instead of acting like a prison guard.

I started off my "rant theme" for the day, with this posting to Facebook: Pet peeve: "It's 6AM 'local' time." What other time would you be announcing, the time at one particular flyer's destination? #SuperfluousWords #LocalIsTheDefault

As Jen and I sat at a table at the Bruegger's close to our gate enjoying coffee and a bagel, names were called for passengers as a last chance to board on another nearby flight, to which Jen said, "I've never had my name called for a flight. I wonder when they do that."

A couple of minutes later we heard, "Would passengers Martin and Riehle please come to gate C22 for immediate boarding." Too funny.

Jen and I were originally scheduled for a 10:40 flight today, but had been changed to this one due to an American Airlines schedule change. So, my heart sank just a little when the gate agent scanned my boarding pass, which was actually an electronic one on my iPhone, and said, "Oh, it says invalid." Fortunately and thankfully, a subsequent scanned worked.

This was an American Eagle flight, so my carry-on ended up being "valet-checked," and it was one of those planes where the "A" seats were the only ones on the one side of the plane with the "B" and "C" seats being on the other side of the aisle. Jen and I both had "A" seats, with two rows between us.

When Jen got to her seat, there was a guy sitting in it, who knew he was in the wrong seat, just hoping to have a seat to himself. When he went to take his assigned sit, a guy had taken it to be able to sit beside the girl that was with him and asked the guy if he'd mine taking his seat, so he could stay with her.

"Anything to help the marriage," he responded, which I thought was pretty idiotic for at least two reasons: 1) Who says they were even married? and 2) Even if they were, who says the marriage needed "help."

While we were waiting to begin taxiing away from the gate, and for everyone to finish inanely annotated musical chairs, I received an iMsg from Jen: "This music is AWFUL."

"FUNERAL music," I replied to her and then posted on Facebook: "Jen and I are three rows apart and we're iMsging each other about the DIRGE that is currently the ambience music on the plane."

After take-off, the girl that was sitting with the guy who kept his seat next to her in that exchange, laid across his lap to sleep. Straight privilege.

We had only about a 30-minute layover in Chicago, and I rushed a little getting to the "Nala gate" (K9) after having to wait for my "valet-tagged" carry-on luggage to be brought up to the jet bridge. I made it on time, but without time to grab a snack for the next, longer leg, of the trip.

Mercifully, I had a window seat in a three-seat row—on this flight from Chicago to Seattle—with no one in the middle seat, and a pleasant enough lady in the aisle seat when I had to get out at one point.

The in-flight wi-fi availability is slowly progressing. I was able to access—free of charge of course, as that's the only way I would access it—some of the wi-fi offerings. Here's a screen shot of what came up after connecting to the ongoing.com wireless network: 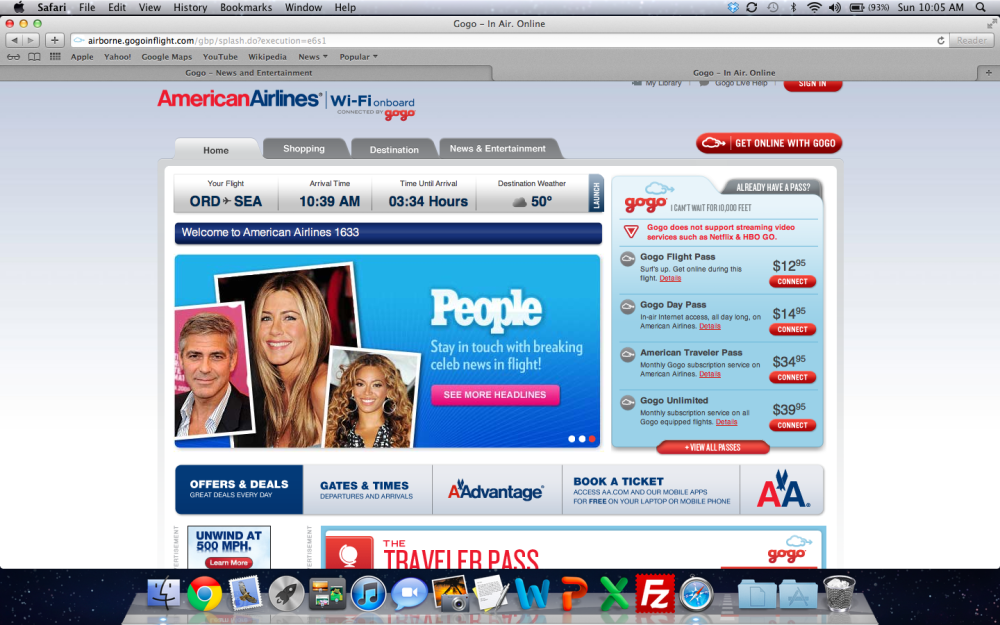 I did something I have never done on a plane today, which was to purchase food. I knew I wasn't going to love not eating for another four hours, so I bought the "Fruit and Cheese Plate," for a whopping 8 or 9 bucks. Since I was charging my card, I made it worthwhile and added some vodka to put in my Bloody Mary Mix. 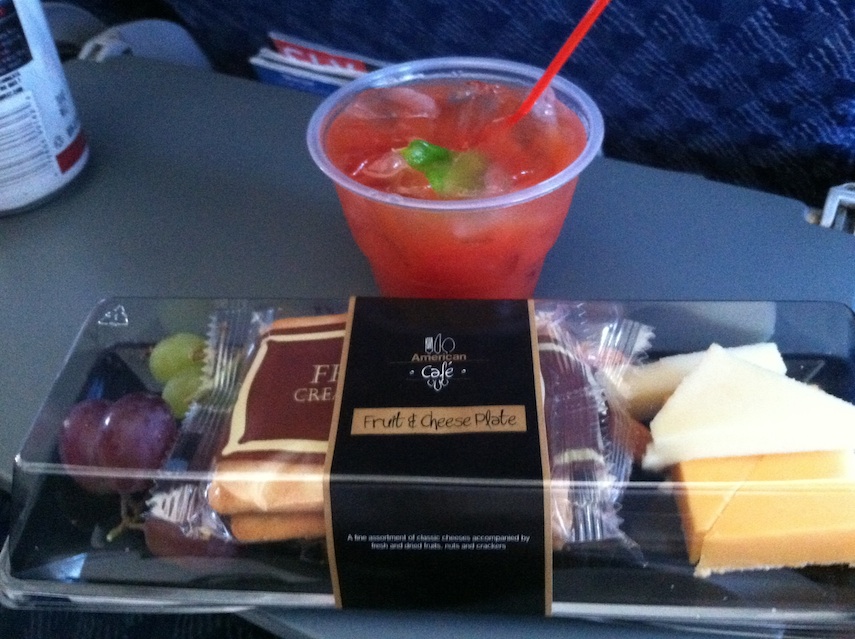 For the record, that "Fruit and Cheese Plate" was described as: "Cheddar, Swiss and Muenster, along with gourmet crackers, red and green grape clusters, almonds, walnuts and cranberries," and for the detailed record, there were four almonds in it, one cranberry, and no walnuts.

For most of the trip, I listened to all of my EmmyLou Harris songs on shuffle on my iPod, and I tookthree pictures capturing the change in terrain as we moved from east to west: 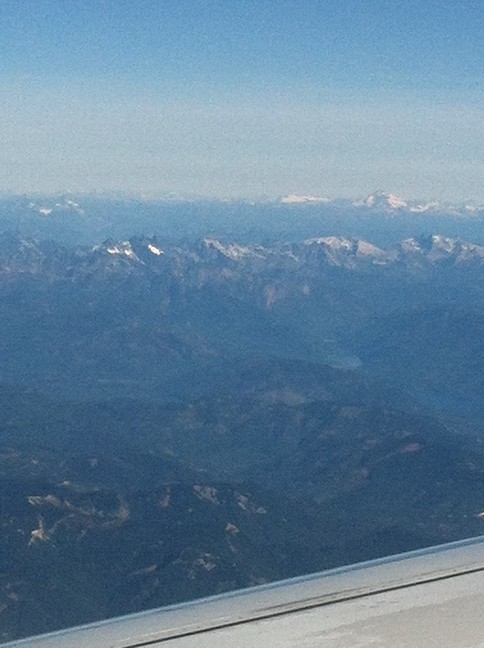 Casey was waiting for us at baggage claim and after claiming Jen's bag we were off to the city. Casey has a great apartment in a great location and shortly after putting down our bags we set out on a short walk to lunch, with our whole day still ahead of us, it being still morning upon our arrival.

Upon arrival at Casey's house, we pretty much put our bags down and headed out in search from some lunch.

We ended up at Mecca Cafe, a favorite place of Casey's close to his house, where the three of us split a cinnamon bun appetizer, which I followed with their "Clubhouse" sandwich, which was delicious.

We made a top at a nearby grocery store on the way home, where I bought two bagels—one cinnamon and raisin and one jalapeño and cheddar—for breakfasts while at Casey's, a container of cream cheese to split with Jen for her bagels, and a container of Yoplait yogurt. This is where we learned that plastic bags are not allowed, and there is a (5-cent) charge for paper bags if you want one, in Seattle now.

We spent a leisurely afternoon back at Casey's place, with a lot of "Internet time" in the afternoon, which fortunately, all three of us get into. It's also where we had our first piece of graciously-baked banana bread by our host: 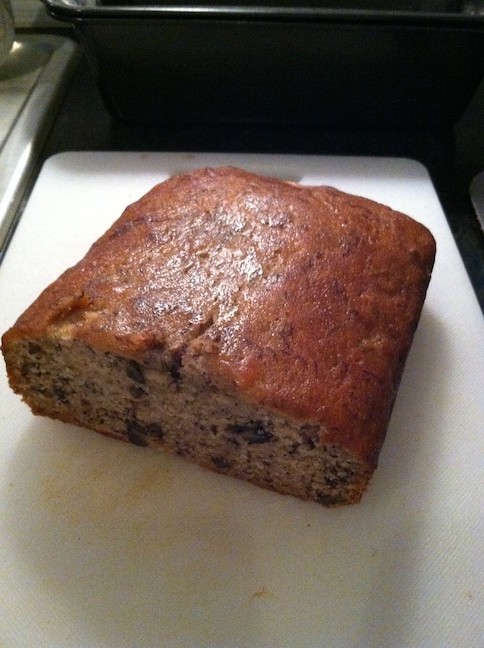 Jen met some of her relatives who live in the Seattle area for dinner, and Casey and I went up to Capitol Hill, where we had a nice dinner at the De Luxe Bar & Grill, and where I had their most delicious Mushroom & Swiss Burger.

When we got back, Jen was already home, and we called it a night fairly early, as Jen and I were still on East Coast time, and Casey generally keeps decent hours!

Thanks so much to our most gracious host and his wonderful hospitality during our first day in Seattle.
Collapse