~Monday~  It was "movie night" at Jen's tonight, as we're "between" seasons of both Downton Abbey and Glee.

While we were approaching the end of Downton Abbey, we decided to watch... 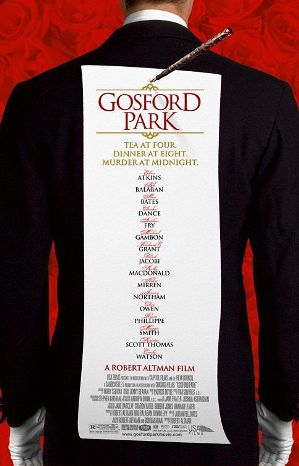 ...during our break, since it was written by the same writer of Downton, Julian Fellowes.

Overall, I enjoyed this movie, although I was surprised to read that it was nominated for a total of 61 awards (some British, some American), 7 of them being Academy Awards, including for Best Picture and Best Director. To me at least, it wasn't that good.

One of my complaints was that it was a little hard to understand the dialogue, and I don't mean because of their British accents. This line in the Wikipedia entry about the film is interesting to that end: "...[Robert] Mack [wrote] that 'the audio transfer is about as good as it can get on a movie of this style'."

I found these tidbits interesting from the Trivia section of the IMDB entry for this movie: