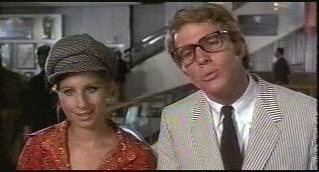 Tonight, the Carolina Theater showed the 1972 classic What's Up Doc?, which I found out about through my friends Ed and Tim's Facebook event invitation, and which I attended with my friends Bob and Laurel.

I thought I had seen this movie when it came out, but if I did, I certainly don't remember it. And thinking back, I would have been a freshman in high school that year, so I most likely didn't see it.


I thoroughly enjoyed it. It had lots a laughs in it, although it did reach what I would classify as the "slapstick" level—which I don't particularly care for—a couple of times.

At one point I thought, "This is like a Shakespearean comedy in terms of its mistaken identity instances—but with suitcases as well as with people."

I loved seeing Madeline Kahn in her debut role. Ryan O'Neal was actually hot—considering he's a blond. And, of course, La Streisand was magnifique.


Two of my favorite quotable exchanges were:


This is a very interesting "theatrical trailer," as it has clips from both the making of the movie and from the movie itself: