~Wednesday~  There's a large park on Kaplan Drive—within a stone's throw of my house, and close to Kent Road.

It's always been a little bothery [sic] to me that the name of this park is Kentwood Park, because although it's next to Kent Road, it's actually on Kaplan Drive. "Why not Kaplanwood Park?" you might ask. I know I do.

Well, it might be that because further up Kaplan Drive there's what looks like a tiny, tiny park called Kaplan Park. And Kaplanwood Park would be too close to Kaplan Park. I guess.

So anyway, I've passed this, what looks like a tiny, tiny Kaplan Park for years now, several times a week, as it's on the way to my gym.

Recently, I decided to do something that doesn't come naturally to me, which is to veer off my schedule, or plan, for a minute and see if this park really is as small as it appears to be.

I pulled over to the side of the road, and I entered the park at a place where two paved paths immediately diverged in the green wood, and sorry I could not travel both, I veered to the right.

Within a minute-and-a-half, I happened upon this footbridge: 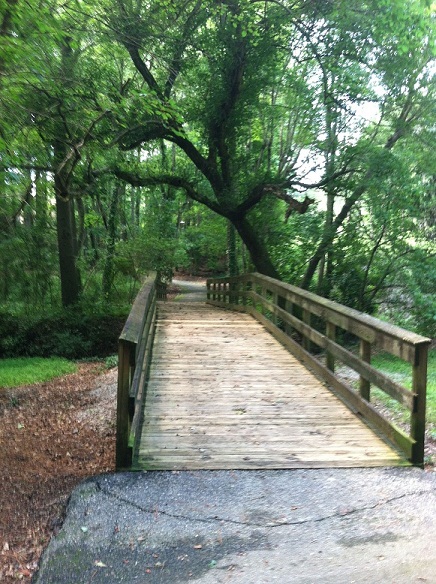 And then, literally a minute later, I turned a corner to the left—that corner you can see after the bridge in the picture—and I could see the place from which I'd entered the park. Tiny, indeed. Hardly worth getting out of the car for.

As if to put an exclamation point on that thought, a lady in the distance walking in my direction was surprised when one of her two Dachshunds on leashes bolted away from her amidst barking fits.

The little thing came barreling toward me, barking up a storm, and I bent over and extended the back of my hand for it to "check out," all while saying in canis vocce, "Oh you big scary thing! What's all that noise about? Come here you cute little monster."

It sniffed at my hand and then backed away, continuing to bark up a storm.

Then, it lunged at my shoe and took a severe bite, with its top teeth planted into the top of my white tennis shoe—down by my toes—and the bottom teeth dug in under the sole.

By this time, the owner was running toward us, and as soon as she could grab its leash she did, and then just kept walking with both of them barking like crazy and their leashes twisting all up in each other's. Not so much as an, "I'm sorry about that."

I checked my shoe three times to see if that dog had bitten holes through it. That's how hard the bite was.

I would never direct my anger toward the dog in these situations, so I just imagined the owner having to walk around in these as a 5-year sentence for bad behavior.