~Thursday~  At the bus stop, I had this thought: "We expect our dogs to be regular." This was brought about as someone who lives with the back of their townhouse facing the bus stop stepped outside with his Golden Retriever, which walked around a little in what I projected to be an attempt to squat with a little dignity, and then it did what its owner wanted it to do in order to accommodate its being left alone for several hours.

I wanted to make a note of this in my little buscapade journal, but the ground was still wet from the several days in a row that it's been raining, and I didn't want to put my soft-sided briefcase down on the sidewalk. The only place I could have set it down was on a nearby one of these: 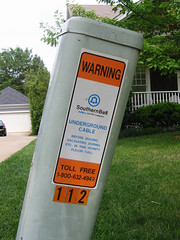 but it had a deteriorating (or perhaps just drenched and breaking apart) blueberry muffin sitting on top of it. Upon closer inspection, it was also being consumed by ants.

I did something I've never done before—mostly because although my previous phone had a camera, I had no Internet service on it and couldn't do anything with pictures once I took them—I took a "stealth picture" of the situation. The first thing I did was navigate to the camera settings and set the flash to "Off." Thank goodness I thought of this, as that would have been most embarrassing. Then I held my phone upright down in my lap and did not anticipate the loud—which probably wasn't as loud as it seemed to me—click when I snapped this picture: Logorrhea was aboard this morning. She asked the driver if she'd heard about some roadwork that's evidently way behind somewhere over on Martin Luther King, Blvd.

The driver indicated she hadn't, and Logorrhea went on, as she's prone to do, "Yeah, they behind. Prolly can't read they blueprints. They hard to read. I remember no one don't wanna take that class in school. 'Cause you make one mistake reading 'em and dats it."

I'm not even sure blueprints are involved in roadwork, but perhaps they are.


We had our monthly Outreach, Communications, and Consulting staff meeting, which means everyone in the four departments under my second level manager. We had agreed to swap rooms for this meeting with a professor who was having guests in from around the country and wanted our regular room, which is much nicer than the one he gave us. However, in thanks for that, he provided three dozen donuts to us for our meeting. Yum!

At 12:30, a university photographer came to our suite of offices to takes pictures of me and my colleague Nick for the upcoming university-level Award for Excellence. You might remember, Nick and I won it for our IT organization, and now, on June 8, we'll be honored along with everyone else at the university who won in their respective colleges and/organizations, and from all of those one (or it might be two) people are going to be picked as university-level winner(s). And then, that/those winner(s) will go forward for a State of North Carolina-level award.

The photographer took a few pictures of Nick and me separately, in our own offices, but also took several group shots, a couple of which we made "fun." We took a couple on the front steps of our building, one with everyone sitting down around Nick looking up at him in an "adoring" manner, and one of me peering out of that, by now infamous, port-a-john that's in front of our building. ("John coming out of the john," as it were.) Then, we went up on the roof of our building and took some pics! No one had ever been up there, so it was cool just from that perspective. Fun!


I left the office with Jen at close to 5:00, and we went to the MS in Technical Communication 20th Anniversary Alumni Reception on the Caldwell Hall patio. I can't even begin to describe the pleasure and excitement I experienced when walking up and seeing that alcohol was going to be a part of the event.

I really had fun seeing a couple of people I hadn't seen in a while, including Brian Swiger and E-Ching Lee, and meeting some new people, such as Meghan, who is actually graduating after summer session.

Ten to twelve glasses of wine (they were small and only filled halfway) later, and I found myself talking to this guy I'd eyed earlier, and who looked more like a construction worker than a technical communicator—not that technical communicators have a look—and after some amount of small talk, I said to him, "So, what's your... availability?"

He looked me right in the eye and said, "Single, and heterosexual."

I said, "Great. My friend Jen over there? She's single and heterosexual, too. And she'll be in your class in the fall. Nice to have met you, man," I said offering my hand and then walked away.

The bartender's name was Dean, and after about my sixth glass of white wine, I asked him how the distribution of red versus white was going.

"Well, I didn't anticipate so many people drinking white, although I should have with all of that cheese," he said indicating the nearby hors d'oeuvres. Not being a wine drinker myself—Good thing, eh? Can you imagine how much I'd've had if I was?—I had no idea cheese goes better with white wine.

"Well, hey, I'll help you out, man. Switch me over to red this time." I'm thoughtful like that.

I didn't like the red nearly as much, and for my next few, which was toward the end of the evening and noting that there were still about four bottles of white left—two of which were already opened—I switched back.

Also toward the end of the evening, coming up on 8:00, I gathered up the name tags on the table of people who I would have liked to have seen who had RSVPed yes, but hadn't showed up: And within five minutes of that, Sandy, Nate, and Leigh all appeared! Woohoo!

My dear friends Sarah and Brad thought it might be a good idea for me to get something in my stomach, so at the last minute we decided to go to Helios, where Brad had coffee, Sarah had some Chamomile Citrus tea, and I had their Cheese Quesadilla, along with a Single-iced Skinny Caramella Sugar-free. Good weather out on the patio, good friends, and good conversation. I love my friends—and my life.

Sarah was an absolute dear and dropped me off at my house, close to 11:00. I went right to bed, and I woke up three times during the night with the most incredible instances of xerostomia that I've ever experienced. On my third trek down to the ice water in the fridge, I filled my workout water bottle with ice and water and brought it up to my nightstand.
Collapse