~Monday~  The girl in the seat in front of me on the bus this morning did one of those Johari Window's second quadrant ("blind spot") things. That's the quadrant that contains the things you don't know, but that others do. 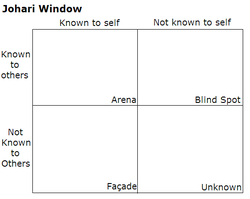 What she didn't know that I did know was that when she pulled up her thick, black ponytail—held together with a multicolored white-pink-lavender-purple tie—to keep from sitting back against it and threw it over the seat behind her, it landed right in the middle of the pages of my opened copy of Mary Higgins Clark's Two Little Girls in Blue.

Girl! I mean your hair is not a bookmark.


I found these three things from Friday's bus ride home that I'd written on the back of an envelope and forgotten.

I had a meeting-less workday, my favorite kind. There were all kinds of Internet connection problems this afternoon that presumably were from NC State's service provider, MCNC/NCREN.

Early afternoon, Jen dropped by my office and after hearing how hectic her day was going to be, I volunteered to attend the NCSU MS in Tech Comm's Orientation tonight, and pass out information about IT at NC State.


I walked across the street to NC State for the 6:00 meeting, where I met a lot of nice people, and more importantly, picked up some food for a couple of days worth of lunches. :-) Seriously, thanks for the killer meatballs, Sarah!

I'm looking forward to the student chapter of the STC's first social and networking gathering, coming up on Thursday, August 27th.

Sarah (E-W) was very gracious and gave me a ride home, which was nothing but balls of laughs the entire way.
Collapse