~Wednesday~ It's not my favorite thing to start my work day off with an hour-long meeting right when I get there. (I'm well aware that I could have gotten there earlier.) A couple of things made it an extra drag today; that is, other than the fact that it was first thing in the morning:

I had Two Guys' new pizza buffet for lunch, where I did keep my eye open for any "tip snatching" activity, thanks to the informed riders on the bus last week.


I met my friend Sharon ("book club Sharon"), who is on campus today and tomorrow for her son Josh's new student orientation, over at the Talley Student Center, where we enjoyed some minutes between her sessions sharing company and some Dulce De Leche Cheesecake Howling Cow ice cream. 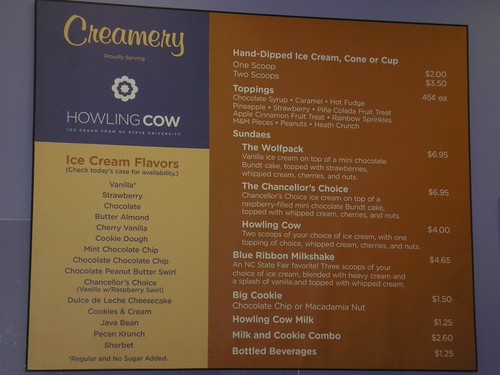 For the record, the water meter cover is still off at the bus stop, as noted getting off the bus this evening.

I guess I should have asked them to put a gift card in the box when I had it shipped to her. I sent her a bucket of 10,000 mealworms (not to be confused with blond dreadlocks):

"What are they for?" she asked.

"They're for the bluebird feeders you got for your birthday," I explained. "I also bought you a membership to the North American Bluebird Society, and you'll be getting a quarterly magazine from them."

Turns out she had no idea bluebirds eat mealworms, so it's certainly understandable that she'd be nonplussed about getting some in the mail. She told me that getting worms in the mail reminded her of the time, when we were married, that I cut my toenails and either mailed them, or gave them in a little gift box, to her little sister. I can hardly remember doing that, and certainly don't remember what the impetus would have been to do something so utterly distasteful—to even me—now.

In my U.S. mail today, I found my property tax (for my townhouse) bill, and a sleeve of two pictures—already in plastic, magnetic frames to go on the fridge—from my mom. The pics are of my dad sitting with his great-grandkids. Sweet.


Dancing was a lot of fun tonight. The was a decent crowd for a Wednesday night, and we had right at a dozen people taking the lesson, which was for a new dance called Jambalaya. Oddly, I totally got the dance on the forward-facing wall, but kept messing up when doing it facing each of the other three walls. Ridiculous.

There was this drag queen there, which is extremely unusual for Flex on any night but Thursday night, when, as I've mentioned before it's "booger drag" night. This girl was there last week as well, and it's obvious she was not doing booger drag.

It was incredibly hot in the bar tonight, and at one point I went up to get a drink and she was standing at the bar. "What's your name?" I asked.

"It's nice to meet you. You've been out for a couple of weeks in a row now," and looking at her impeccable make-up job, I said, "It is so hot in here. I know if I had make-up on like that I'd be even more soak-and-wet with sweat than I already am."

She looked me dead in the eye, reached up to her hair, which was reddish, chin length, and curved forward on either side of her face, and grabbed the end on the left side, "It's the hair that's the killer," she said, shaking her head. One got the distinct impression she was suffering for her art.

"I can imagine," I said, "That's why I can't wear a cowboy hat. When your head is covered it just adds to the trapped heat."

I danced six fun two-steps tonight, one with Joe Judge, Bill, Carl, Michael, Rob, and Joe (of Phil and Joe). I also had a great partner dance with Geromy, and a hot (physically and temperature-wise) shadow dance with Joe J.

I left late tonight. I'm usually on my way home by 11:15, but left right at midnight.
Collapse