I had four meetings today, three work meetings and one personal meeting.

My morning work meeting was my annual appraisal, which actually only covered nine months, since I've only been employed by NC State for that long. I got the highest possible rating on three of the five key responsibilities, and the highest rating on seven of the eight competencies on the appraisal form. I was particularly affirmed by my supervisor's entry into the "Overall Comments and Results" section:

At lunch time, I met my new lawyer to update my will, Living Will, a Durable Post-Incompetency Power of Attorney, and a Health Care Power of Attorney. The lawyer's name was Brenda F. Martin, so sharing a last name, we hit it off immediately. Turns out we had several other things in common including:

She told a hoot of a story about "loophole" programming around "the Year 2000 date problem," including such things as programming in things that they knew would only happen 50 or more years from them when they knew they'd no longer be around.

We met in her office, because their conference room was unavailable (because I was 30 minutes early to my appointment), and she warned me before we got to it, "My office is a mess. I have piles of paper everywhere."

Oh. My. God. I thought I had piles of paper. At least mine are in the privacy of my own home. It was absolutely incredible, and I was totally relieved when she said upon my leaving, "I'm going to go ahead and input your information this afternoon and draft up the papers to put in the mail to you. I'm leaving for Savannah tomorrow, by train no less, and I want this to be done before I go."

I said, "Oh great. Thanks," thinking, "Thank god you aren't going to just add it to one of these piles."


On the city bus (the #4 Rex Hospital) ride from St. Mary's Street and Hillsborough back up to my office at Gardner and Hillsborough, I sat in a seat affording a good view of this young girl, maybe early 20s, jet black hair, and short—both her hair and her body. I did one of those once-over type looks starting at her feet and moving up:


It was obvious that though none of these colors matched any of the others, their ensemble was most deliberate. Just when I thought it could be no more intentional, she reached into her purse and pulled out—I kid you not—prescription glasses with powder blue frames and lime green temples.

They matched the skirt and the blouse to the tee. I nicknamed her The Tuiti-Fruiti Lollipop Swirl Girl.


My afternoon meetings consisted of attending the department meeting of one of the departments on my "reporting beat," followed by meeting with a colleague to help her move some of her organization's content into our Drupal-managed Office of Information Technology website.


At home, I ran out to Target where I bought a couple of greeting cards and some bottled water for a work picnic potluck that we're having tomorrow at Pullen Park.

On the way home, I stopped at Taco Bell, where I picked up a Chicken Ranch Taco Salad (no beans!) to go. 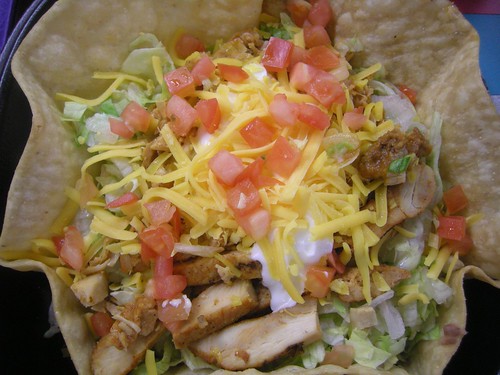 Dancing was a lot of fun tonight. There was a good-sized crowd out for a Wednesday night, and Carl taught the Boot Scootin' Boogie for the lesson.

On the way home, I stopped by my office, where I unloaded the extremely heavy two 24-packs of bottled water, bringing them upstairs to the refrigerator on our floor, as there's no way I'd've been able to take them in on the bus in the morning.
Collapse