I woke up just before 9:00 to Robert putting on coffee and leaving to grab some breakfast for us. I rolled over until he returned with three beignet and a bagel with cream cheese. Sweet man.


The bus to Hollywood Studios pulled up just as we were approaching the bus stop area and we hopped on, shortly thereafter approaching the resort's entrance/exit gates, which move even slower than a glacial pace. I've coined a new phrase for their speed: a tectonic plate pace.

Speaking of coining phrases, we dubbed this one, "Eddie, did you want to go on the..." for when we ask each other a question and turning around when getting no answer, only to find the other person either not there or a perfect stranger in their place.

The phrase came from an incident yesterday when this lady was standing in front of me and she said off to her side, "Eddie did you want to go on that one over there next?" and turned around when getting no answer to find me instead of Eddie.


Right when we arrived at Hollywood Studios, on Hollywood Boulevard, Robert got sucked into an improv street performance, where these two ladies were talking with a snooty British accent, "You! The one in the Aloha shirt. Come up here!" the one in blue called to Robert. Robert complied and they promptly named him Phil A. Buster, and proceeded to work him into a little vignette, where it was his sole job to pat the one on the hand to soothe her. Eventually they sucked a little girl into their web, and we slinked away.

The first attraction we went on at Hollywood Studios was The Great Movie Ride, in which our emcee in the boat we were riding in throughout the ride was obviously a "sister." As the boat started, he welcomed us to the ride, and then said as we went through the first door, "This is my favorite genre of movies—musicals!" Wait a minute. Let us put a look of surprise on our faces.

Next we went to the Indiana Jones Stunt Spectacular attraction, but inside we found it so full that we couldn't easily get seats, and the few minutes we spent watching standing really didn't engage us, so we left.

Instead we went on Star Tours, which was a Star-Trek based attraction, and one of those in which you sit in a simulator that feels like you're zipping all in and out and about, but really, the container is just shaking you and tilting in various directions. They have these a malls sometimes. I do wonder how they simulate the feeling of G-force in you though, when they shift into "warp speed."

Our next stop was for lunch at the Back Lot Restaurant, where we each split a Grilled Veggie sandwich and a Grilled Turkey and Cheese sandwich. Both were quite good.

Passing the park's landmark, the hat from The Sorcerer's Apprentice, I snapped this picture of Robert with his head—unbeknownst to him—tilted perfectly. There was this cutest little girl—which Robert and I both thought was a boy at first as we just heard her and didn't see her—in the same group with us on the Tower of Terror. In the little preview error for the attraction, they enclose you in a library, turn off the lights, this old black and white, staticky, TV comes on with Rod Serling welcoming you to "the Hollywood Tower" showing it back in its heyday and letting you know that something is about to go wrong—very wrong.

When it ended and the lights hadn't come back on yet, it was totally quiet, and the little girl goes, "Holey moley!"

The little girl's family ended up right behind us for the rest of the wait, and she started saying, "Daddy, I don't want to go on this. I'm scared."

Dad kept assuring her it would be all right, and that she'd have a chance to change her mind as we got closer, and then eventually got her to agree to stay on if he held her during the ride—which he, of course, couldn't really do.

At one point her dad was trying to tell the family behind them in line that she had gone on that roller coaster over in Animal Kingdom, "Oh. what's the name of that thing..." he kept trying to remember.

Finally, though not being one to join in on other people's conversations, I said, "It's Expedition Everest."

I said to her, "You went on that twice? Well, that ride's a lot scarier than this one. You're gonna do just fine on this one."

We ended up in a different group for the actual ride, so we didn't get to experience her reaction, but we waited for their group to come out at the end, just to see how she'd fared. As we walked outside just behind them, she grabbed her mother's hand and they went back into the entrance."

I said to the dad, "She was scared to death, huh?"

We got in line for the Rock 'n' Roller Coaster again, and I took this picture of Robert while we were in line, with the Tower of Terror as a backdrop. This time, we were in the last car of the roller coaster, and I used all my might to keep a smile on my face during that first blast-off where you go 0-60 MPH in 2.8 seconds and your face flesh envelops your cheekbones, not unlike what those high intensity hand dryers do to your hand skin. I was successful, at least according to the pics up on the screen at the end.

Before leaving Hollywood Studios, we stopped at the PhotoPass place to get our free 5x7 from AAA as part of our travel package. There was a lady behind us with two adorable little boys who were interested in seeing the pins on one of the picture clerk's vest.

The little boy said that he already had one of them, maybe Goofy, and the mother said, "I don't doubt that."

"Huh?" he said with his head cocked, not as if he hadn't heard her, but as if he didn't understand what she was saying.

"What does that mean?" he asked.

"It means, 'Yeah, you probably do have Goofy.'" she said.

After standing in line for about 15 minutes, we found out that we could have just walked right up and asked for a "PhotoPass" card, which you just give to any photographer you see around the park. They take pics of you and "beam" them to your card. Then before you leave, you stop back in one of the shops like we were currently in, stick your card in the machine, and buy any that you want.

So, we took a card, and headed off to the Magic Kingdom via the monorail, with a connection at the Transfer Station.

Our primary goal back in the Magic Kingdom today was to go to the Lilo & Stitch attraction to get a souvenir on the way out. We should have gone directly to the souvenir shop and skipped the ride. It was, by far, the worse attraction we'd been on. There was more drama in the audience than there was going on as part of the ride. I don't know if some kid was scared or what, but a cast member was walking through the (mostly dark) room with a flashlight looking for somebody with issues.

Before leaving Tomorrowland, we treated ourselves to a most delicious Root Beer Float.

We passed by Cinderella's Castle on the way out and saw a PhotoPass photographer near it, and he snapped four or five photos for us, including the final one in which he asked us to each place one palm face up, mine on top of Robert's, and then asked us to look at my empty palm. Felt kind of queer, even to us.

We stopped at the PhotoPass shop right at the exit, where we looked at the pictures he's taken, and we watched as the Photoshopped various things in the photo, including different borders and the year. He then took this little .jpg of Tinkerbell and dragged it into my open palm that we were staring at so intently in the picture. We passed on that one.

We caught a bus back to Port Orleans–French Quarter, where we had to stand beside a large (both in number and size) family who proceeded to eat and talk very loudly to each other all the way back.


After a nap, we took the boats downtown, and joked about getting "Donna" again as our captain, but instead we got, "Clay." He did the "tour guide" thing on the waterway to downtown, talking about everything we passed. As we pulled into Downtown Disney Marketplace, Clay asked people to guess how many Legos made up the dragon that was by the shore. 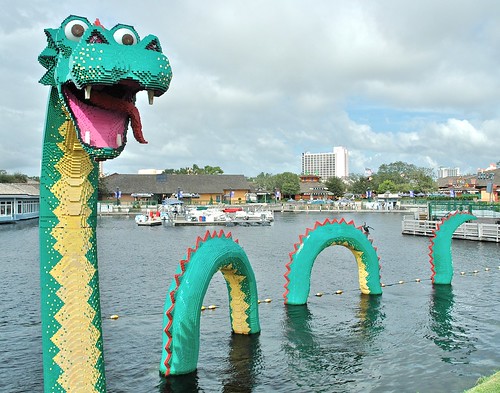 We had a nice dinner at Planet Hollywood, which was a "loud, happening" place. We liked our waitperson a lot. Robert had the Pulled BBQ Pork sandwich, and I had their club sandwich.

When we got back to the pier and in line to wait for a boat to take back to the French Quarter, Clay, our former boat captain, was working the lines. He said something about another boat supposing to be here in a few minutes, and we joked, "Unless it's Donna driving it."

We told him about last night, and he said, "Yeah, we call Donna 'Ahab in Drag,'" which of course, absolutely slayed Robert and me.

And then I added, "And her husband works here, too, we hear."

"Oh yes, Alvin. He's driving the boat behind hers tonight."

I said, "Yeah, she was a little peeved last night when she got to our dock and her husband wasn't there to greet the boat like he's supposed to."

To which he replied, "Oh yeah. It's clear who wears the pants in that family."

Back at the resort, I went down to get our boarding passes, and after a couple of user errors by the lady behind the counter, I finally got them. We're all set to board the Disney non-magical non-express in the morning.
Collapse