I had a morning of meetings today.

The first one was the University Information Technology Committee (UTIC) meeting, which is held every other month. It's the one that I recently (a couple of weeks ago) finished the meeting minutes before, as that's my charge, and this is one of those "official university meetings" that has to be documented for the public. That went from 9:30-11:00.


I walked to the Gopaks Bazaar convenience store, which as I've mentioned here before, houses a little-known small restaurant in the back, and I the most incredibly delicious lunch. It was their "Non-vegetarian Lunch Platter." They always have a vegetarian platter and a non-vegetarian platter to choose from, and the platter consists of two main items, a ton of (I think it's Jasmine) rice, a small salad, and a piece of flat bread. Today's main items on the non-vegetarian platter were Chili Chicken and Chicken Currey.

I was practically crying and sweating just a bit by the time I finished it, but it was just so good. On the way out, I stopped at the counter and said to the lady who had taken my order, "That was very, very good. Thank you!"

She smiled broadly and said, "It's your first time here?"

"No," I replied, "but every time I come, everything is just delicious."

"Well, thank you for letting us know," she said.


I had a very productive work afternoon and caught the 6:30 bus home.

This exchange with my friend Susan:


and this one with my friend Courtney:


Here are pictures of two of those three memories. The little twig with the red peppers on it is what I gave Courtney for her wedding bouquet. 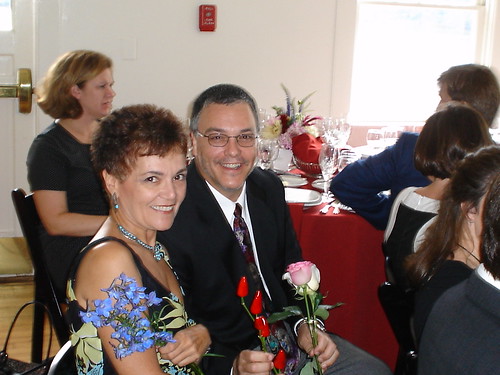 My friend, Katherine chandler updated three details about how we know each other as "Friends" of each other on Facebook, and one of the ways was as "Extended family." That's nice.


I had the following thank you card in my U.S. mailbox when I got home. This is from my aunt, for whom a month or so ago I had some photos enlarged to 16x20 of pictures I had taken a year or two ago of the grounds around—and including—hers and my uncle's house.

And in a final token of affirmation, as in affirming a friendship, hearing my name called, I looked up at one point when beginning a line dance tonight and who should be sitting at the bar dividing the dance floor from the rest of the bar? My new Twitter friend @hughlh!

Tonight we reviewed Funky Cowboy and we learned the Zorba dance, which is great, because it's one of those dances that is always done at hoedowns and rodeos. And it's good timing with the Queen City Stomp coming up next month. Woohoo!
Collapse