I finally let go of the pressure to go—mostly for the exercise—with the old, "I'm on vacation and I'm not going to beat myself up about it. I'm walking everywhere in the town every day, and that alone meets my 30-minutes-per-day commitment to get some kind of exercise." That's my story and it's sticking to me.


Truth be told, I had some "leftover" breakfast for lunch today. After the quiche this morning, I fixed myself a bagel with some cream cheese and chives, and took a hard-boiled egg, both of which I put in my fridge for lunch later.


Of all things, this afternoon I finally turned on the television in my room—not to watch it, but to view a movie I'd snatched from the ample collection available free in the B&B lobby. Several people have said to me in the past, "You've never seen Fight Club?" So that's exactly what I did.


I'm generally not attracted to Brad Pitt, but I found him exceedingly hot in this movie for some queer reason. The movie itself was good, but I wouldn't call it great. Not sure it lived up to all the hype.

After watching it, I was sitting out on the deck and Chip came out—on his way to Tea Dance, at which he hoped there'd be some new faces with it being the "beginning" of another week here. Most of the rentals go from Saturday to Saturday.

"I'm passing on that high-dollar event today," I said.

He asked me if I'd gone to the beach today, and I said, "Actually, I did the most unlikely thing. I watched a movie. Fight Club. So many people have told me that I need to see that movie, and since they had it downstairs, I decided to take advantage of it."


This is pure marketing genius, in my opinion. There is an establishment here called Shop Therapy. 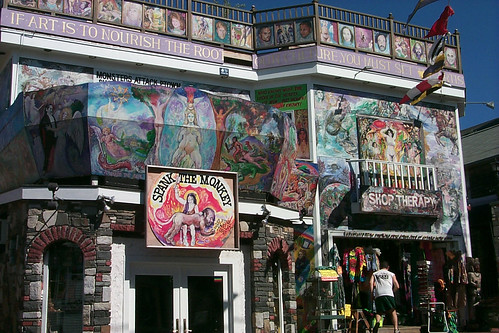 The place has the look and feel of a "head shop," and out front, they have a three- or four-foot tall statue that holds incense, which burns almost all the time it's open. And this is the pure genius part: What they burn is an about six-inch long with the girth and circumference of a corn cob piece of rope that I'm quite sure is made of hemp. You know exactly what that smells like burning.

The heads of everyone who walks within 200 or so feet of that place—recognizing the smell—tilt back as their noses try to follow the aroma.


Another street-side attraction was a man trying to get people to register to vote. "Register to vote here. It takes less than three minutes. We need 100% participation." And then he added, "And a little help from Canada."


I had an early dinner tonight for a few reasons: (1) I wanted to beat any Saturday night eating crowd, (2) I had an early lunch and I was hungry for dinner by 5:00, and (3) I didn't want to have eaten such a big meal so close to going out tonight.

I saved my last dinner here for my favorite restaurant—a Provincetown staple:

I had the closest thing to our traditional Portuguese clamboil tonight. Here at the Lobster Pot, they call it a clambake.

It started with a roll, followed by a cup of New England Clam Chowder (which was out of this world), followed by the house salad. I chose the Toasted Sesame dressing, which rocked.

The main entrée arrived containing a one-pound lobster, six steamers, a baked potato and one ear of corn on the cob. I put on my bib, and went at it. Cleaned my plate.

My waiter stopped back by, "Any room for dessert?"

"No, thanks. I'm going to the Portuguese Bakery for a malassadas. Got to take advantage of my heritage while I'm here."

I had no idea how much my meal was going to be. The price of the entrée was marked "Market Price" due to the lobster, plus I paid $4.00 extra to substitute steamers, as it normally comes with mussels instead.


Straight people are a trip. Here's a small family—husband, wife, 15-ish year old child—standing on Commercial Street, one of the gayest streets in one of the gayest towns in America, and they're looking across the street at some drag queens who are announcing tonight's show and trying to bring people in.

The wife is making a crinkled face, and she's saying to the husband while staring at one of the drag queens, "Are those boobs real?"


I passed on the underwear party that was going on at Purgatory tonight, as (1) It would've cost $10 to get in, (2) It'll get hot as f*ck (and not in a good way) in there in an hour or less, (3) Most of the people who'll be in their underwear shouldn't be, and (4) The ones who should be and are, wouldn't give me the time of day. Bitter, party of one, your table is ready.

I opted for the A-House instead, and once the upstairs opened, I went up there. I said hello to a guy with an Atlanta t-shirt on, who actually turned out to be from Connecticut. Another Richard. He had friends from Atlanta who had bought him the shirt. He was 52, had a partner of 27 years, and was retired. My kind of people.

As usual, within an hour or so, it was butts to nuts in there.

I stopped at Spiritus Pizza on the way home, for my traditional last-slice-of-pizza-as-vacation-ends treat.
Collapse