I went down first, and connected to the wireless network while waiting for Robert to come down. Once he arrived, we took a table inside, and I checked my e-mail.

Robert read yesterday's blog entry, while I got a bagel with cream cheese, some orange juice, and some coffee.

Then, we both looked at today's N&O obituaries. To the dozens of kids running around the place, I'm sure we looked like two old men looking for their friends in the obituaries.


We returned to the Blue Ridge Parkway where we exited yesterday, and our first "stop" was actually a "drive-thru" at the Grandview Overlook at mile post 281.75, elevation 3240'.

This was a drive-thru for two reasons. One, because the view was hardly worth stopping for, and two, to let the car tailgating us get in front of us.


Our next stop was at the Osborne Mountain View overlook, mile post 277.7. elevation 3500', but I found a scene on the opposite side of the road more interesting.

I was actually interested in the Christmas trees growing here, though the hay bales ended up being more prominent in the picture. 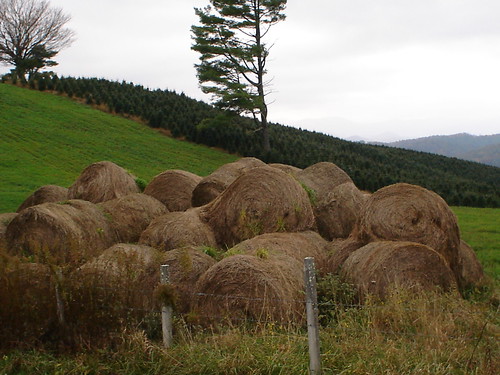 Our first official stop was at Thunder Hill Overlook, at mile post 290.5, elevation 3776'. The sun was actually shining deep in the valley below, but the colors weren't too spectacular.


Our next stop was at Sims Pond around mile post 290, approximate elevation 3800', where there was some beautiful color beyond a bridge. 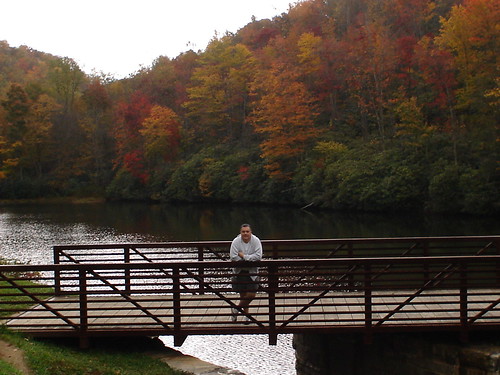 There were some horses standing about, presumably waiting to take a group out on a trail ride. One of the horses had a little dog as its rider. 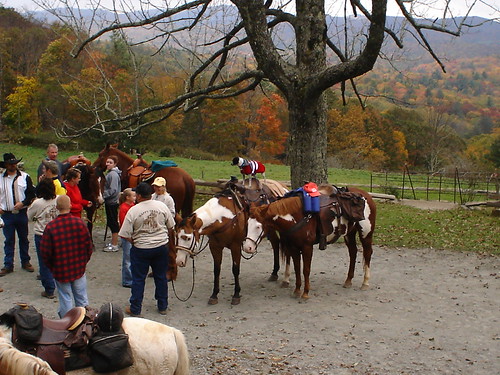 In this next shot, they were trying to give the reins to the dog. 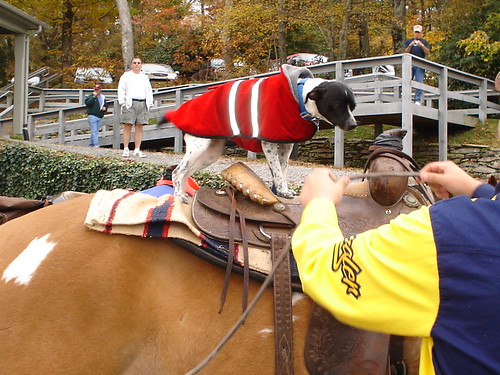 There was a beautiful lake on this property, and color was nicely permeating the trees around it. 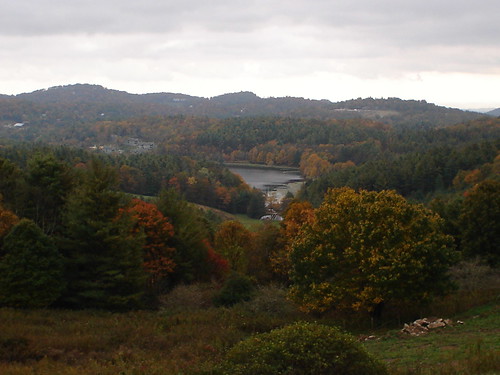 The craft center resided in this beautiful house. 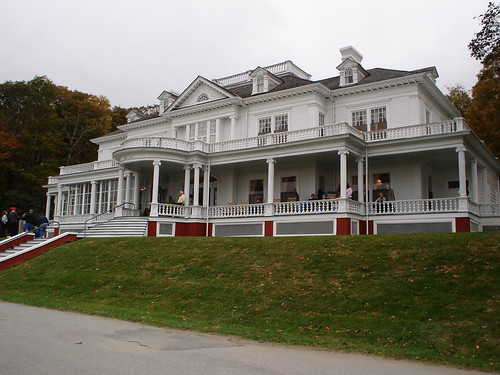 Our next stop was Price Lake, which was surrounded by a ring of color. 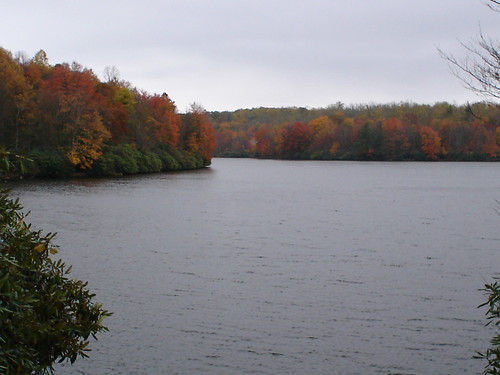 The Price Lake Dam was nearby, and I had to "play the birthday card," to get Robert to run to the top of it for this picture. He didn't really feel like it, and I said, "But it's my birthday trip." 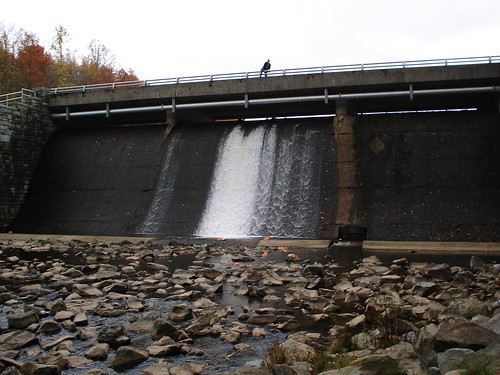 That's him up there with one foot over the edge. Those are smashed pumpkins at the bottom of the falls.


We stopped at Green Mountain Creek, where there was some beautiful color, and took a few pictures there. We also had a light lunch there, in the car, with Robert eating his leftover salad from Backyard Burger, while I ate some Tostitos and cheese.

This wasn't an official stop. We had pulled over to the side of the ride to snap pictures off a bridge, and several other people followed suit while we ate. 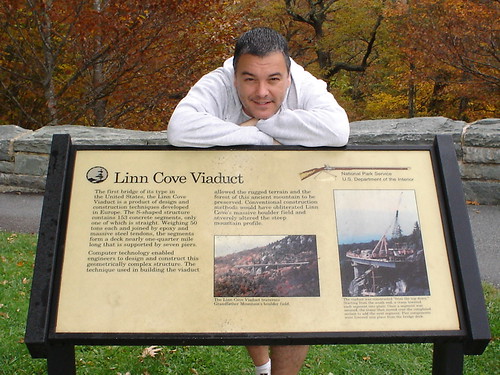 Here we did a very short portion of the Tanawha Trail, which started off with the Linn Cove Viaduct Access Trail.

The end of the Linn Cove Viaduct Access Trail. Around the corner, following the fence, it continues as the Tanawha Trail. 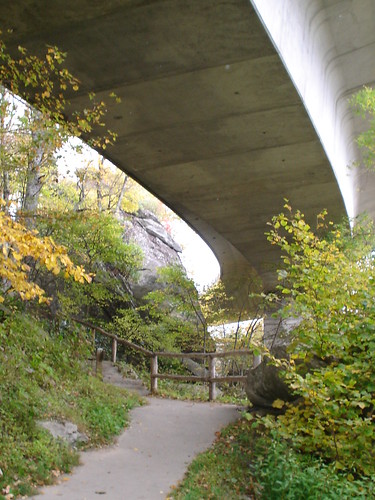 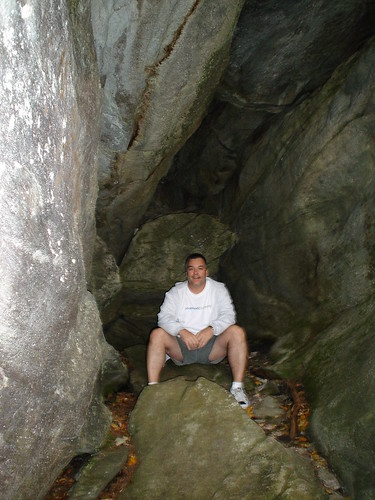 And tree roots grew where they could. 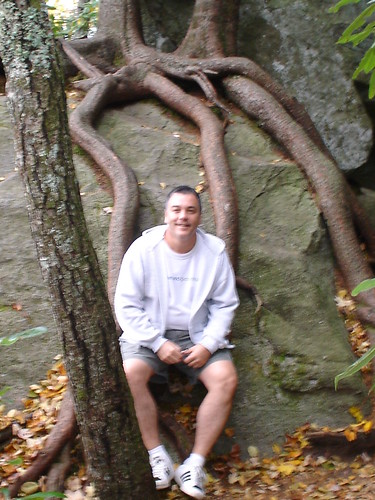 Before we left this stop, Robert bought a couple of refrigerator magnets for us, and we emptied the camera by uploading the pictures to my laptop.


At around Beacon Heights at mile post 305.1, elevation 4212', we took this picture of my car on the parkway, which sums up our three-day trip -- the riding and the colors. 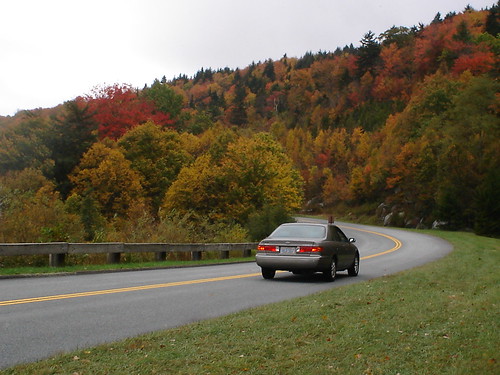 We stopped at Grandmother Mountain Gap at mile post 306.2, elevation 4051', and took a couple of pictures there, as there was some decent color, and we liked the attention to Grandmother. Grandfather Mountain singing, "It must have been cold there in my shadow, to never have sunlight on your face. "


Our next stop was at Flat Rock, where we took another short hike.

Our payoff for taking this trail was seeing a rainbow at the top, as it had started to drizzle. 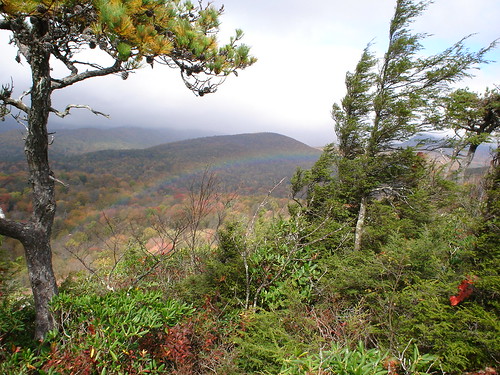 Grandfather Mountain was mostly covered with fog. We got a picture of it, but it wasn't that good.

There was a woman having her boyfriend or husband take pictures of her and her dog together, with the valley in the background. She was talking to her dog in baby talk.

The return portion of this trail was real nice. Here I am sitting on a tree that had fallen across the trail. 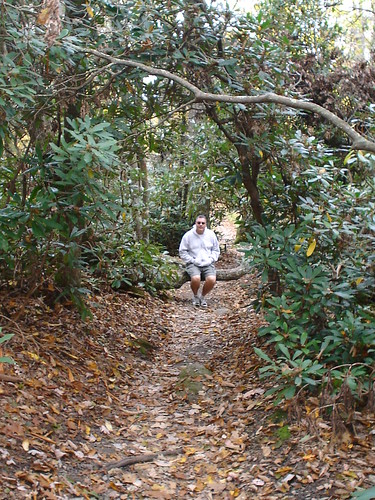 We were walking along this trail when we passed a tree with a big wart-like thing on it. I said to Robert, "Do you know what that is?"

I only recently learned about burls on my Alaskan excursion into a Temperate Rainforest. This was a big one. 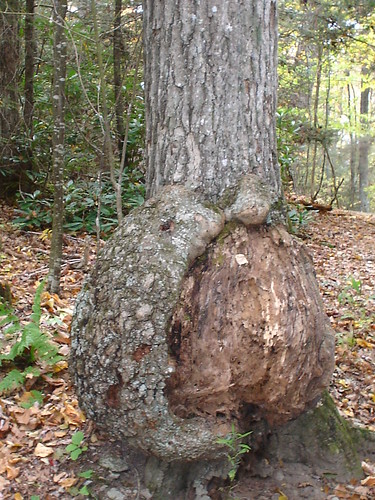 Though this looks a lot like the burl our guide pointed out to us in the rainforest, the website above suggests it might be a butt scar instead.


Our next stop was at Linville Falls, where we also did a picture upload from the camera to my laptop, before setting out on the trail.

This was a very uphill trail, which actually led to a somewhat disappointing view of the Linville Falls waterfalls. 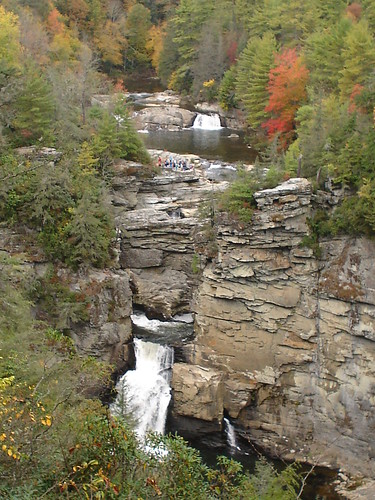 Just after the Linville Falls area, we had to exit the Parkway at mile post 317.5 onto U.S. 221 for approximately 13 miles. We didn't know why. This story explains, what they call, the "8-mile" closure.

The detour was pretty well-marked, though we managed to miss the final turn back onto the Parkway, and went down this incredibly steep hill winding around the mountain. This was U.S. 236 to Marion.

We realized our mistake more than halfway down, and couldn't turn around until the bottom, where we did, and headed back up in second gear.


Back on the Parkway, we passed through our first tunnel today, and by the end of the day had been through many. This is the Little Switzerland Tunnel, 547-feet long, at mile post 333.4, elevation 3490'. 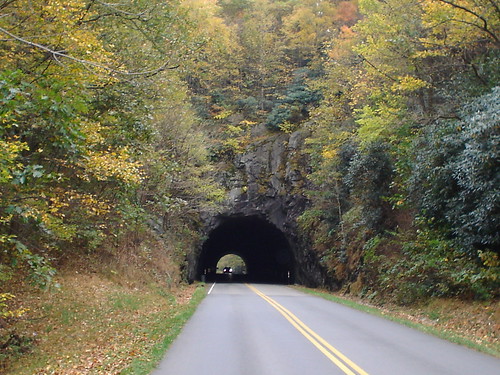 We only saw two wild animals the entire drive, two deer, together, and within a mile of Deer Lick Gap at mile post 337.2, elevation 3452'.


We did three quick overlook stops, taking a picture at each:
On the opposite side of the road from the Curtis Vally overlook, the wall of rock was "perspiring." The sun came out just as I was taking this picture. 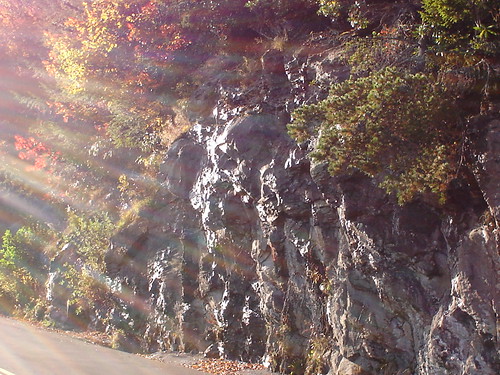 Our last official stop of the day was at a Black Mountain Gap at mile post 355.3, elevation 5160'. Here we had a mostly-in-the-fog view of Mount Mitchell. 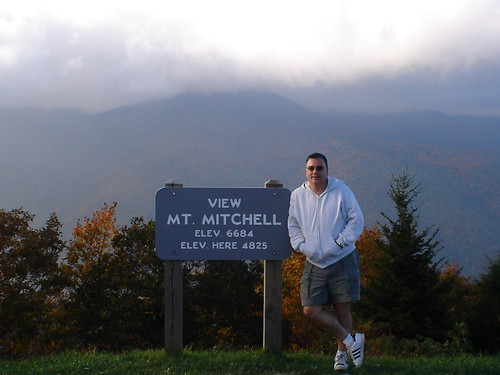 Over the last 15 miles of the day, we drove by many overlooks and passed through several tunnels, concluding our day at mile post 382.6, elevation 2040', where we took the exit for US 70. From there, it was a 5-mile ride into Asheville.

Robert was quite familiar with Asheville, so we drove right to our hotel for the evening without incident.

The Asheville Days Inn Downtown was not most luxurious of places, and it didn't start off too well.

The people next door had snuck a dog into their room, which was barking, and they were nowhere to be found.

I had a little chat with the front desk person, during which I shifted slightly into "Mary mode." He said he'd leave them a voice mail message, and a note on their door about our complaint.

It ended up being taken care of. Presumably, the people were there for the Brewgrass Festival, and once they got back to the room, we never heard a peep out of the mutt again.


Supposedly, there was a secure wireless network available at this hotel.

You had to get a UserID and password, and according to an instruction sheet in the room, you had to call down to the front desk to get it. I did, and he said, "You actually have to walk down here to get it."

When I got down there, he printed off the UserID and password on this little sheet of thermal paper, which resembled the size of the receipts you get at gas pumps when you pay by credit card.

Though both the UserID and password were all typed in uppercase, he told me that the system is case-sensitive, and I should actually type everything in in lowercase.

I said to him, "I only see one network available when I scan for them. It's something like gec dogom. Are you sure the network is up? Is its name going to show up as Days Inn or something like that?"

He said, "It should be up. I don't know anything about the name. We've only had this wireless stuff for four or five months now."

"Where's the router I asked?"

He had no idea.

"Okay," I said leaving with little hope that having a UserID and password for a network that wasn't to be found would be very productive.

It wasn't. I never was able to connect while there.


At the recommendation of a work colleague cherished, remarkably competent work colleague who sometimes reads my blog, we had dinner at Doc Chey's, which was very, very good.

There was a lady in front of us in line who was from England, and her guide book had pointed her to this restaurant.

We each had a Veggie Spring Roll for an appetizer. Robert had the Chinese Chicken Soup, and I had the Chicken Pad Thai.


Back at the room, we did two crossword puzzles out of the newspaper, and I did a little work on this blog entry before "lights out."

Another great day of enjoying a beautiful part of our state. We covered 145 miles today.
Collapse