Robert put on coffee, while we got ready and we left shortly after 8:30.

We stopped at the Hardee's at Avent Ferry and Gorman, and found it its usual slow service. The worst part was the cashier who kept coughing into her hand, and your change before she handed it to you.


At the beginning of the trip, Robert spent some time comparing our MapQuest directions against our North Carolina - South Carolina map from AAA.


As we approached our starting point on the Blue Ridge Parkway, we passed a pumpkin patch on the side of the road. Neither of us had actually seen a pumpkin patch. Coolio. 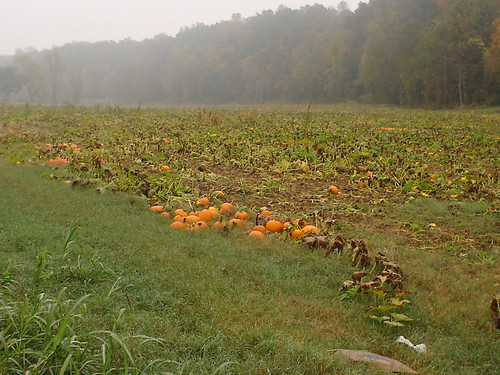 Just up the road, we passed a house with a great scarecrow out front, and I had to have a picture of it. I ran up into the middle of their front yard and took this: 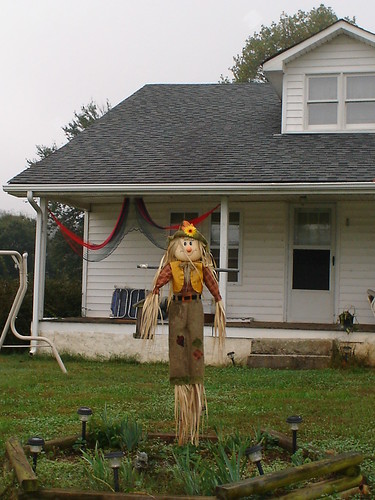 We began our trip at the Cumberland Knob site at mile post 217.5, elevation 2885', on the Blue Ridge Parkway, the first visitor's center on the North Carolina side of the NC - Virginia border.

The fog was incredibly thick here, with visibility being, seriously, ten feet. It was treacherously slow-going the first five miles or so. 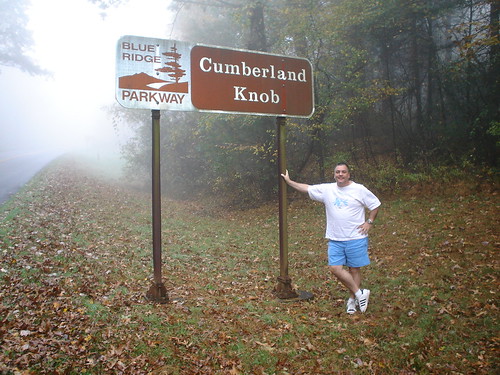 Our first stop was at Fox Hunters [sic] Paradise :

It was incredibly foggy here still, so we didn't do the short, easy trail with a view.

There were a couple of problems with the sign describing this overlook. It needed an apostrophe somewhere in the word "Hunters" in the title, and it had the wrong its near the end of the description. 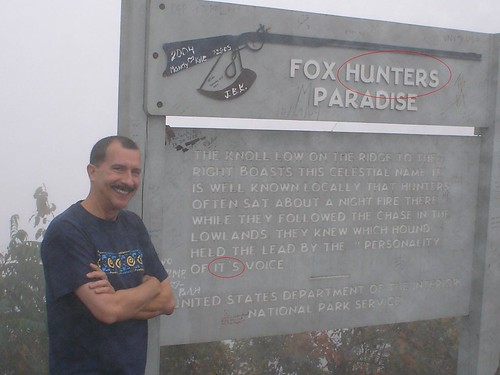 Our next stop was at Little Glade Mill Pond:

I would hardly call this a trail. There was a pond. And you could walk around it. Period.

We got some sun ray action in a picture here: 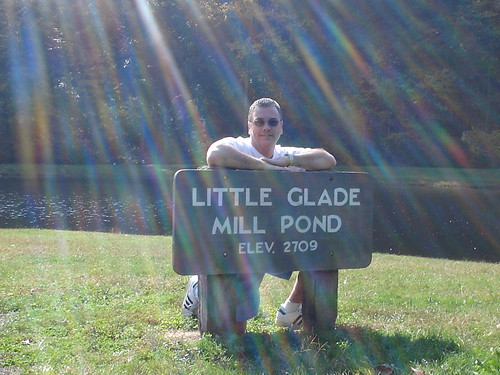 Our first stop out of the fog was at Air Bellows Gap parking overlook at mile post 237.15, elevation 3729'. 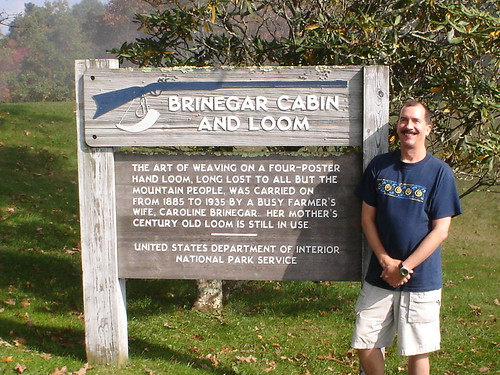 This cabin was built by Martin Brinegar in about 1880 and lived in until the 1930s when the homestead was purchased for the parkway from his widow. The original cabin stands today: 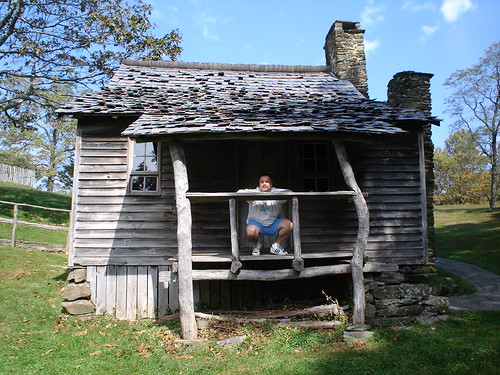 There is an actual working loom inside it. 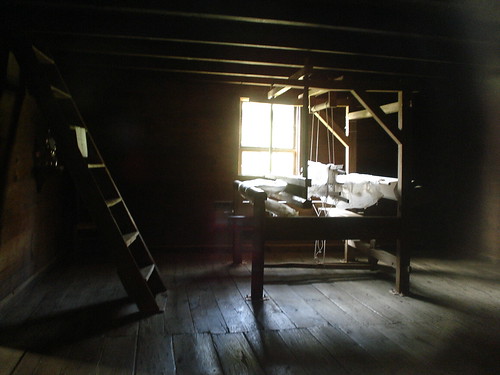 There was also a little vegetable garden out behind it that someone is tending to.


We intended to stop at the Cherry Hill Coffee Shop at mile post 256.9, but we never saw it.

Instead we came upon the Northwest Trading Post at mile post 258.6, elevation not provided. Here we bought a loaf of sourdough bread, some cheese straw stix, and four postcards.

In the car, we just ripped some chunks of bread off the loaf. It was so fresh that it was still warm. It was some of the most amazing bread either of us had had in a long, long time.


Just a couple of miles down the road, we stopped at Jumpin-Off Rocks: 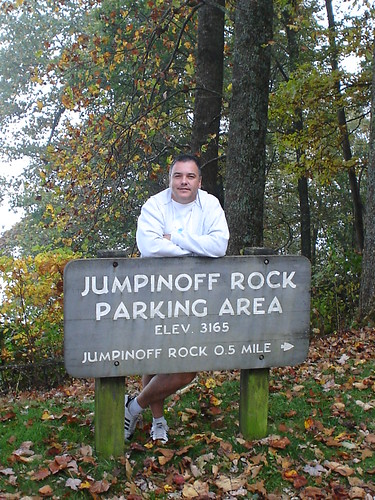 This was a heavily-wooded, narrow trail that looked like this: 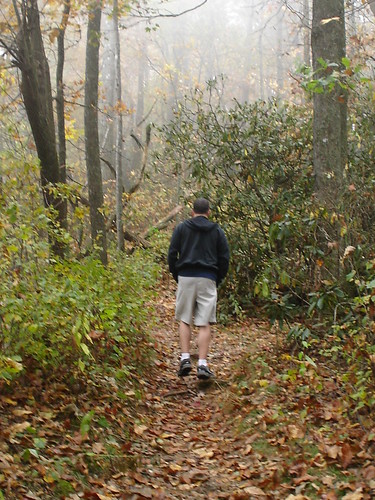 After walking for about 10 minutes, we passed one couple returning as we were heading out. "Is there a vista ahead?" we asked them, somewhat sarcastically, since it was so foggy out.

"Yes, it's very close. You're almost there," they said with a smile.

It was pretty much just around the corner. This was the beautiful vista promised at the end of the short woodland trail: 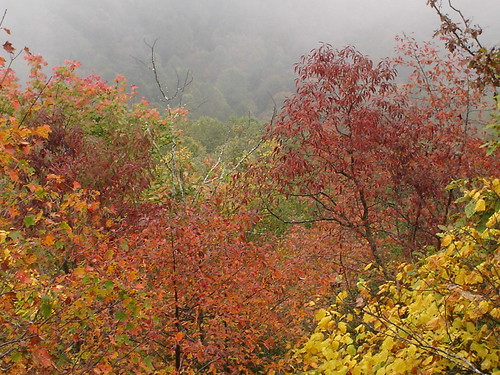 Our final trail stop for the day was the Cascades Trail:

This was my favorite trail of the day. Many of the trees had signs in front of them identifying them, and telling a little about them.

We got to this little fast running stream that was running a little fast and a little downhill, and I said, "This is it. We'd better get a picture of it."

Robert didn't want to take one. He just kept looking at it, and said, "This can't be it. This isn't plummeting". There was a sign nearby that said "Return," which pointed to the left, so I thought this was the end of the trail.

Then Robert noticed that the trail also went to the right, and then we saw people returning from that direction. I'd made him take a picture of that ridiculous (in retrospect) stream, and as we walked on, he erased it.

As we walked on, we began to hear a plummeting waterfall getting closer. 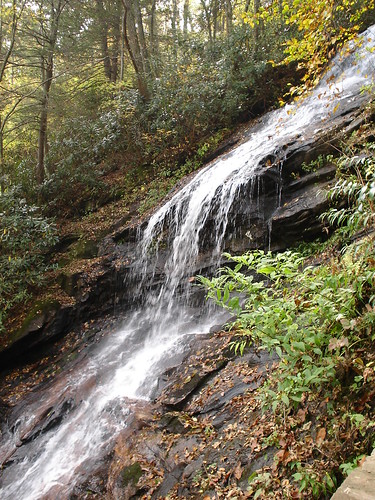 We passed this little cabin on the land housing the old Cool Springs Baptist Church. The color of the tree suckered me in. 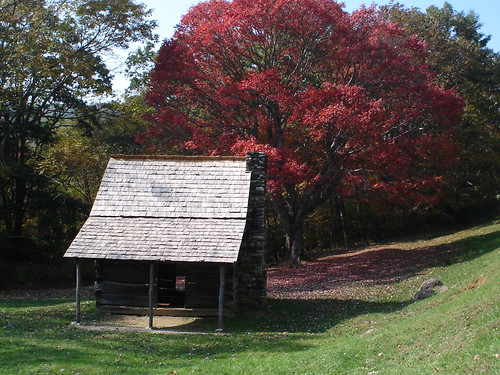 We easily found the Quality Inn Appalachian Conference Center, and checked in at around 3:00 without incident.


We took a short ride to find a place for lunch, and in doing so, passed right by the ASU campus, which was a surprise, and quite nice.


We ended up eating at Macado's, where we had incredibly good sandwiches, and incredibly bad service. I actually left the waitress no tip. I can't remember the last time I did that, if ever. She was useless.

Robert had a rare roast beef sandwich, and I had the "Stogie," which consisted of a stack of turkey, with provolone, mayo, lettuce, and tomato on pumpernickel bread. Those came with chips and a pickle slice, and we shared a side order of the most incredible potato salad ever.


We drove down to Blowing Rock, which was only 8 miles down the road. We parked and walked through the quaint little downtown. 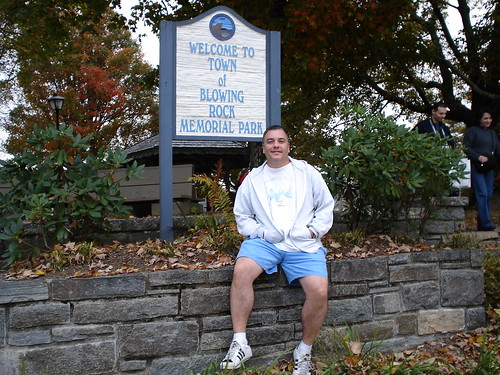 It was getting dark fast, and we took a quick drive up to "the rock," and arrived at 10 minutes to closing, which was at 6PM.

Since the weather was still rather bad, and we only had ten minutes, they let us in at the "senior admission" ($5.00 each, instead of $6.00), and we took a quick run through the place.

Robert snapped this depiction of the legend of Blowing Rock. 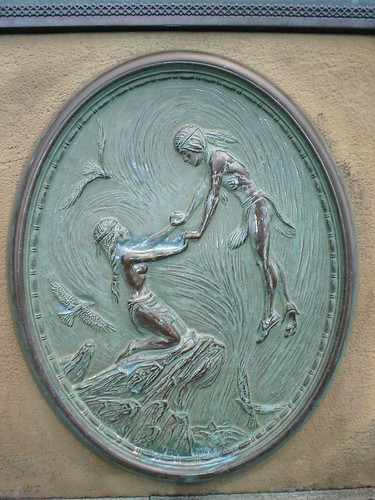 Here I am sitting on the actual rock. 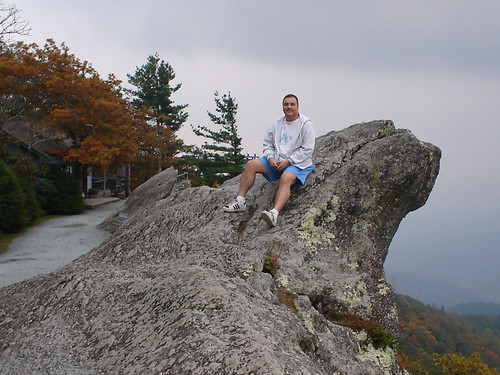 And here's the rock from another angle, jutting out of the surrounding flora. 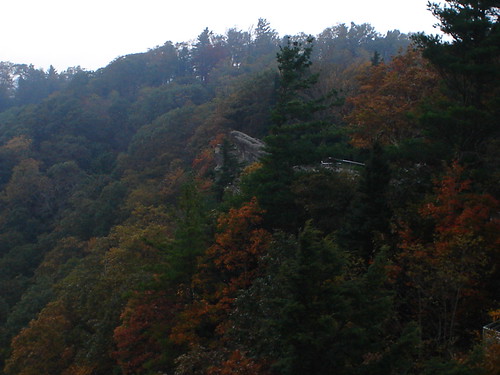 This officially ended our sightseeing driving for the day. We covered 99 miles today.


Back in Boone in our hotel, we watched

on my laptop. It was pretty decent, with a very homoerotic scene near the end.

Love it when the guy finally gets the guy in the end -- even if they do both pretend like it never happened the next day.


We ran out for a very late night dinner at about 10:00, at a place called Back Yard Burgers, which we thought was a local place, but later found out was a chain.


We returned to the hotel to find the place teeming with kids, as within the last couple of hours, four buses had pulled into the place.

Other than not being able to get into the elevator when we returned from dinner, and not being able to find stairs to avoid them, they didn't bother us in terms of noise or anything, though they seemed to be causing lots of complaints for the front desk staff to handle.


I devised this blog entry, and got to bed right at midnight. A good day.
Collapse