We got "A" vouchers for our Southwest flight by "checking in" on the Internet early in the morning before heading to the airport. Mary Lou did the same.

Our flight ended up being delayed by almost one hour. We were scheduled to leave at 11:20. The first delay was to 12:05; the second one to 12:15. The three of us ended up sitting together.

It was a very short flight. We had just enough time to scarf down the peanuts and our drinks, and the three of us managed to complete a crossword puzzle in the airline magazine in the seat back pocket.

My favorite entry in the puzzle was Rebus: a puzzle where you decode a message consisting of pictures representing syllables and words. Here is an example of one:

Our checked bags came out pretty quickly, and we proceeded to the rental car area, which we had to reach by shuttle. Though it was a little bit of a ride, I like the fact that all of the rental car agencies were in shared space.

I listened as the people in front of me were upgraded, wondering what size car they had reserved.

He entered my reservation number, and then said, "Mr. Martin. A compact car, correct?"

"We have some good specials on SUV today, if you're interested in upgrading," he said.

He proceeded to give me a free upgrade to an SUV since they were out of compacts.


I don't even know what kind of SUV we got. It was made by Chevy; I do know that.

Its neatest feature was that while a song played on the radio, the artist and the title of the song scrolled in LED lighting in the radio display area.

And it wasn't satellite radio, I don't believe. It was just Baltimore's country station, WPOC 93.1 FM. Unless regular stations are also broadcasted on satellite. At any rate, it was neat.


We checked into the Annapolis Sheraton without incident. We were in room 212; Mary Lou was in 229.

When we got off the elevator on the second floor, and turned the corner, we ran into Courtney. This is not that moment, but here's a reunion picture of the three musketeers: 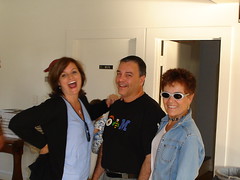 Courtney, me, & Mary Lou
Courtney asked us if we'd gotten our gift bags when checking in. We hadn't, and I went back downstairs to fetch them.

The bag contained a big bottle of Pelligrino carbonated water, two pieces of chocolate, two biscotti's, two bags of peanuts, and three gourmet cookies -- one chocolate chip, one sugar cookie, and another one with M&Ms on the top of it. Nice touch.


While unpacking, Robert leaned against or touched the headboard, and it crashed to the floor. It was mounted on the wall. Maintenance was there, almost within a minute, and repaired it. The maintenance man noticed the other one hanging a little precariously, and tightened the screws with the electric screwdriver he had with him.


After unpacking, we met Mary Lou, and the three of us grabbed a little bite at Famous Dave's, a nearby BBQ place. ML and I each had one mixed drink, and Robert had tea, I believe.


We caught the 5:15 trolley to the St. John's College Hodson Boathouse, which is where the rehearsal dinner, the wedding, and the reception were held:

Here, we saw and met a lot of Courtney's and Ben's family. Here's Courtney's mother (on the left) and her sister (Courtney's aunt) on the right: 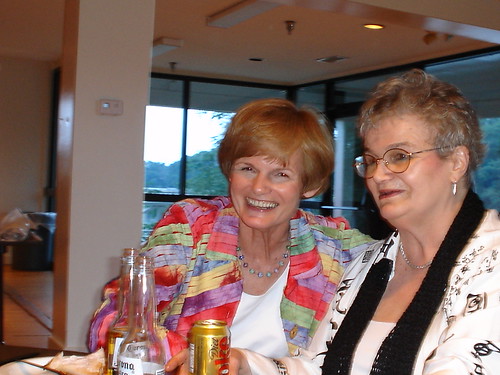 Dinner was provided by Ben's parents, and was catered by Red, Hot & Blue, and was delicious. There were ribs, BBQ, sausage, chicken, macaroni and cheese, mashed potatoes, and several other sides. There were various kinds of pies, and vanilla ice cream for dessert.

Robert spent probably about ten minutes talking to Courtney's aunt (above), and later when meeting one of her daughters said to her, "I was speaking with your mom earlier. She's such a nice lady."

"Oh no she's not. She's mean. She's evil," she said, practically hissing, to the astonishment of those of us listening. Later she apologized for the remark. Family dysfunction in America abounds.


Here's the bride- and groom-to-be-tomorrow in a casual moment chatting with their friends Ben and Carmen (not pictured). Sorry about the closed eyes, Ben! 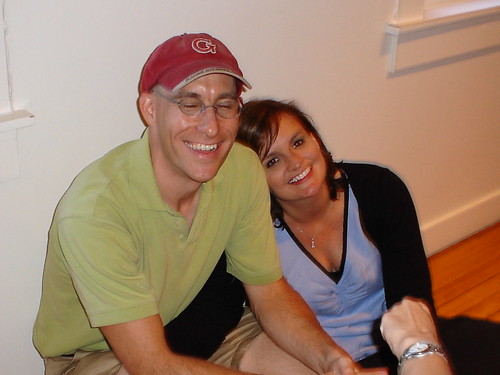 After dinner, some people were put to work helping to make the centerpieces for the ten tables at the reception tomorrow night: 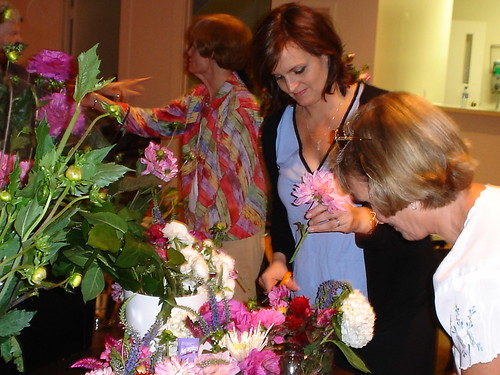 One of the "characters" we met tonight was Frankie -- an old friend of the family. She's drinking a mojito: 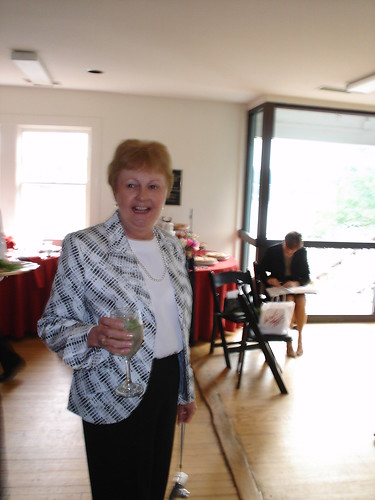 We caught the 9:30-ish trolley back to the hotel. It was really nice that they provided transportation -- both to and from the rehearsal dinner and the wedding.
Collapse