Robert was up before me and made us some coffee. Then, he ran across the street to get us bagels from that deli before it closed at 10:30. They only had plain ones, but we had them with cream cheese, and they were yummy. 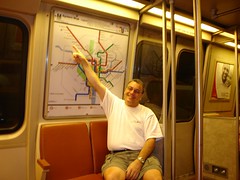 At about noon, we walked over to Union Square to pick up the Metro. Here we are taking it to the Shady Grove stop at the end of the Red Line, where a shuttle bus will take us to the rodeo at the Montgomery County Fairgrounds. 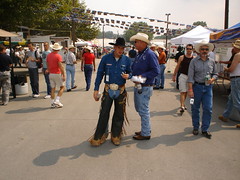 Just inside the entrance to the rodeo at the fairgrounds, we came across this nice, corn-fed cowboy. He was one of the many who were participating in the rodeo events. 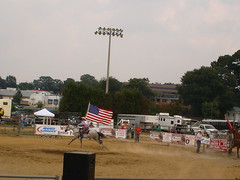 The opening ceremony started off with the presentation of the color guard. Several flags were brought into the stadium, one at a time, each by a riding cowboy: the American flag, the Canadian flag (Canada is part of the "Atlantic States"), the flag of the state of Maryland, the ASGRA (Atlantic States Gay Rodeo Association) flag, and the gay flag.

As our National Anthem was played and sung, the guy with the American flag rode his horse around the arena. Ditto for the Canadian Anthem, which was played next. 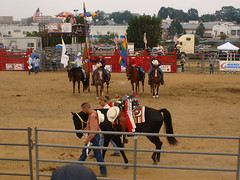 Each year, toward the end of the opening ceremony, the riderless horse ritual honors people who have died since last year's rodeo. The announcer says something like, "One of the saddest moments in the life of the rodeo is when the very special relationship between a rider and his horse comes to an end."

Two gifted and generous members of ASGRA were singled out this year -- Billy Collison and Courtney Lovelace.

The sash belonging to Courtney is under the saddle, and Billy's boots are in the stirrups.

I can't articulate how incredibly sad and moving this ritual is. Let's just say that I cried during it, and I didn't even know these people.

The "gay element," if you will, are these additional events: Goat Dressing, the Dolly Madison Race, Steer Decorating, the Wild Drag Review, and the Wild Drag Race.


We watched three contestants doing the Steer Riding. The first one was quite impressive. The second one didn't beat him, and the third one didn't "cover" (stay on the horse long enough -- 6 seconds -- to have his score count).

While we were exiting the arena after the third contestant, someone tapped me on the back. It was Tony, the marine who used to line dance with us, who we haven't seen in probably a year, and always wonder about.

I asked him about his friend, who when we saw him last, was heading to Iraq. He had come back safely, but was being redeployed in November.


We spent most of our time there at the fairgrounds under "the big tent" dancing. We had lunch consisting of pit-cooked meat -- I had ham, Robert had beef -- we split a side of fries and a side of macaroni salad, and soft drinks.


At about 4:30, we took the shuttle bus back to the Shady Grove red line Metro stop, and then the Metro back to Union Station.


We napped, and then had dinner in the restaurant downstairs in the hotel. We had the soup and salad bar. Tony was there eating, too, and he came up and asked me if he would see me "dressed up" tonight at the Harvest Moon Ball.

"This is what I'll be wearing," I said pointing to my shorts, t-shirt, and tennis shoes.


I went down to the dance at just after 9:00. I did Reggae Cowboy and the Canadian Stomp. The place filled up pretty quickly.

Robert came down close to 10:00, and we had a full night of dancing. Tony was there, and bought us a round of drinks, which was really nice. And then, later, when he left, he gave us two drink coupons he had left over. He is all about some, "God bless you."

Rocky and his brother Rickey showed up later in the evening, and we saw Joe and Jose briefly.