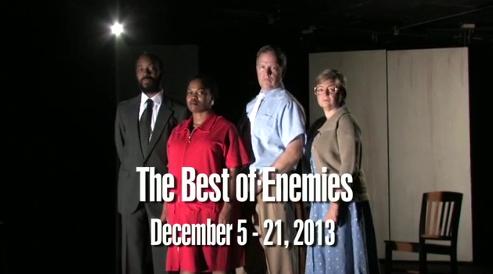 If you've lived in this area long enough to remember the attempt to integrate Durham schools in the early 70s, then you're likely to even recognize the events portrayed in this play. It's based on the true story described as:

The friendship between Ann Atwater and Claiborne Paul (C. P.) Ellis is often cited as a quintessentially Durham story. In 1971 Atwater, an African-American community organizer, and Ellis, then head of Durham’s Ku Klux Klan, were picked to co-chair a committee to address community concerns about the integration of Durham’s public schools.

They clashed at first, both defending their separate spheres. During the discussion sessions called charrettes, Atwater and Ellis found common ground. Both came from poverty, and both had children in public schools who faced ridicule because of their parents’ participation in the charrettes. They developed a lifelong friendship. When Ellis died in 2005, Atwater sat with his family at the funeral.

Ann Atwater and Bill Riddick, themselves, were in tonight's audience, as were the son and daughter of C.P. Ellis. It was truly an honor to see all of them in person, and as a member of the board of directors of Manbites Dog Theater, I was proud to be a part of the kind of experience our theater company continually strives for —area premiers of compelling productions.


Lakeisha Coffey was superb as Atwater, and she described the pressure of it as:

*“This is the first time I’ve had to portray a character who is local and well-known and living,” Coffey said. “It’s a big responsibility to do it right.”

Thaddaeus Edwards, who played the other living character, also in the audience felt similar pressure about which he said:

*Meeting Riddick was “very illuminating” and “very freeing,” Edwards said. He was able to talk to Riddick about how he felt during those tense days of 1971. “I was able to separate him from the man on the page.”

And about the other main character in the play:

*To prepare for the role of [C.P.] Ellis, Derrick Ivey said he had to find a way to portray Ellis’ early hatred for Atwater and black people in a realistic way. He read an interview that writer Studs Terkel did with Ellis, and tried to understand how poverty drove much of Ellis’ hatred and resentment. “Thankfully, he has a turnaround,” Ivey said. “The hard part is going to the dark place so he can see the light.”


At the end of the play, the Durham Mayor Pro Tempore, Cora Cole-McFadden, took the stage to announce that the honorable mayor of Durham, Bill Bell, had officially proclaimed December 6, 2013 as Ann Atwater Day in Durham, NC., and Ann was presented a bouquet of roses.

This is such a remarkable story, and even more so being a local story, and it explores a number of themes, including:

There are several "audiences" to which this play will appeal:


Obviously, tonight's show was "super-charged" with the honorable audiences, but I'm quite sure that you will find this play interesting, heartwarming, and hopeful if you go on one of the remaining nights of its run. Information about the September 2014 performances and tickets...
Tags: manbites, plays
Subscribe