~Tuesday~ I joined my friend Bob, and his friends Cindy and Tina, at the Colony Theater for the 7:15 screening of Quartet this evening.

I enjoyed this movie, although I suspect more so than others might, because I really enjoy opera music. I used to attend the opera regularly, with my friend Mary—who found it dreadfully impossible to find a straight guy who would enjoy them with her.

Part of the fun of going was to do "air checks" on events that would happen in the mindmap I usually drew for the opera, and which we had with us in our laps. We usually bought pretty good seats, and needless to say some of the snooty people around us didn't really a-PREE-see-ate our fun.

Apropos to this particular movie, here's the mindmap I did when we saw Rigoletto: (Click image to enlarge.) 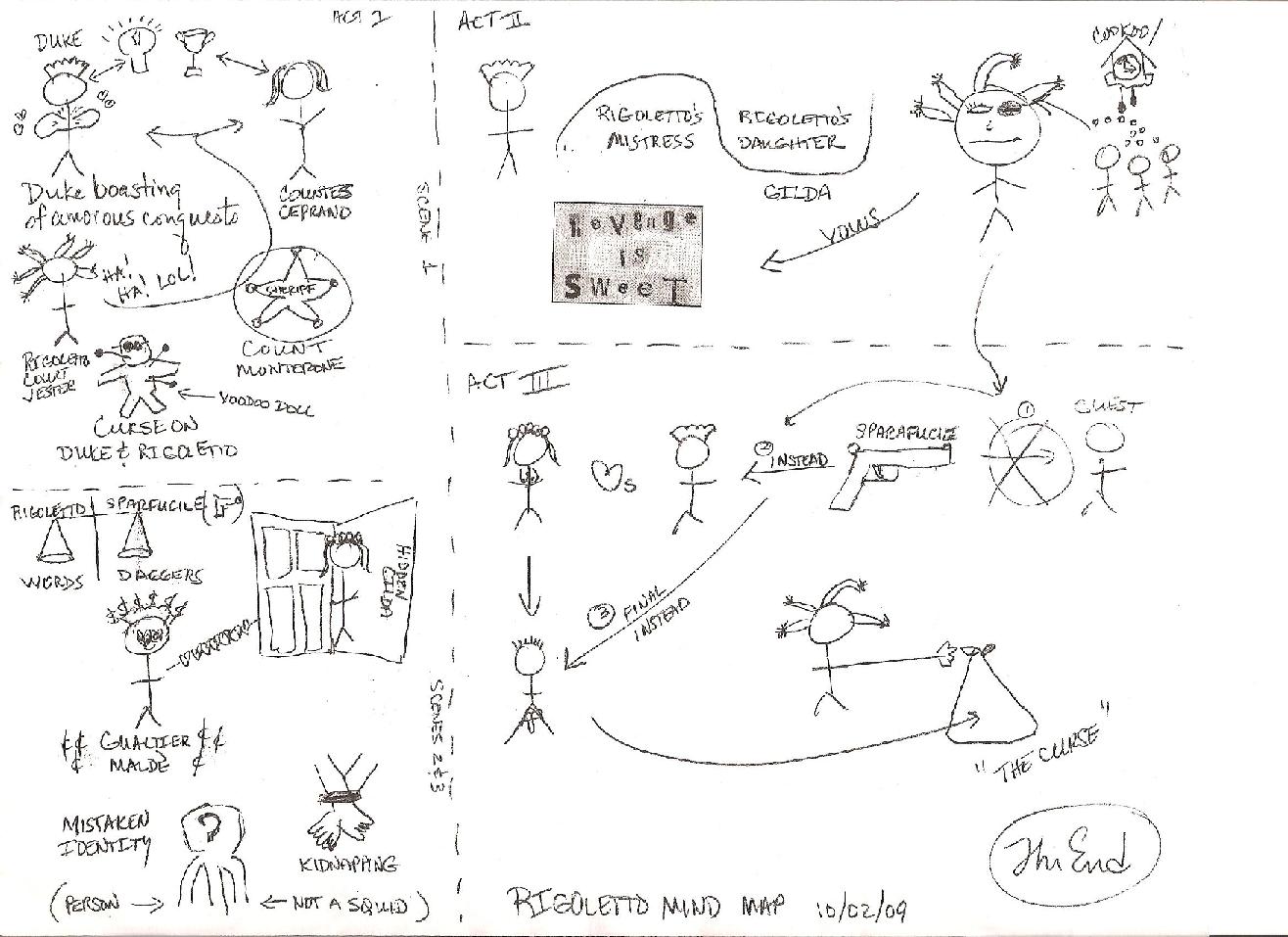 Lifelong friends Wilf and Reggie, together with former colleague Cissy, are residents of Beecham House, a home for retired musicians. Every year on Giuseppe Verdi's birthday, the residents unite to give a concert to raise funds for their home. But when Jean Horton, a former grande dame of the opera fallen on hard times, also Reggie's ex-wife, moves into the home to everyone's surprise, the plans for this year's concert start to unravel. As old grudges threaten to undermine past glories and theatrical temperaments play havoc with the rehearsal schedule, it becomes apparent that having four of the finest singers in English operatic history under one roof offers no guarantee that the show will go on.

My thoughts and observations about the movie


Overall, I found the movie entertaining, and I'm glad I saw it. It also reminded me of how much I like opera and that I actually have Verdi, composer of Rigoletto, scheduled to play at my memorial service, as highlighted below:

If it were up to me, this is how I would like the memorial service to take place:

It is my wish that any or all organs be donated.

It is my wish to not have a viewing at a funeral home.

It is my wish to be cremated. I have a pre-paid cremation plan with the Cremation Society of the Carolinas.

It is my wish to be cremated in shorts and a t-shirt. A nice black t-shirt to make me look thinner would be a nice touch. No horizontal stripes in any case.

It is my wish that the least expensive container for cremating be used, if it's necessary to use one. I don't care if it looks cheap.

I have no particular wish for anything to be done with my ashes; however, it is my wish to not have them kept anywhere where it will be necessary to pay someone for perpetual care. If they are not needed for the memorial gathering described herein, and no one wants them for anything, just leave them in the incinerator. Believe me, it will not hurt my feelings.

It is my wish to provide an opportunity for my immediate family to "see the body" if they need to. However, I don't want this set up as a separate "public viewing." As long as they can "take a look" sometime before the cremation, that would be fine.

It is my wish to have a two-hour time set aside at the Cremation Society for a memorial gathering, where my body, closed up in the cheap cremation container (draped in purple if possible), will be in a room with chairs scattered all about.

I would like to have the following pieces of music played during this time: Allegri Miserere, The Tallis Scholars directed by Peter Phillips, Gimell, CDGIM 339, and Verdi Requiem & Operatic Choruses, Robert Shaw conducting the Atlanta Symphony Orchestra & Chorus (I have both of these CDs.)

I would prefer that no clergy be associated with my memorial service in an official capacity. It would be fine for any friends to speak during this time either to the group or amongst themselves. This should be "just if it happens," though; I don't want an "agenda" arranged, or a eulogy planned.

If my death is one such that it's not possible to have the body available during the memorial service, then I'd like this same type of memorial service to take place when possible with either the ashes in an urn or container (if anyone bothered to keep them), or with just a picture of me.

It is my wish to not have flowers as part of my memorial service. Instead, please recommend a donation in my name to The David Lohse Memorial Fund or Love Wins Ministry (see obit for addresses).

Some kind of blowout party could follow this if anyone feels like throwing one, preferably one with two-stepping and line-dancing cowboys in attendance. :-)